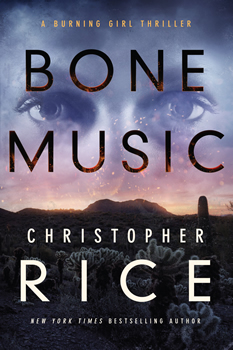 In a starred review, Booklist calls Christopher Rice’s BONE MUSIC a “stellar and gripping opening to the Burning Girl Series.”

The compliment could also easily apply to the first chapter, in which Rice takes the reader through a haunting scene that expertly introduces Charlotte Rowe—a seven-year-old survivor of harrowing abuse and exploitation.

Though she is an adult by the second chapter, and has changed her name to Trina Pierce to try and shake her horrid past, that formidable opening scene resonates long after you’ve turned the novel’s final page.

“It was a way for me to get to the heart of who this character really is,” Rice says. “It was powerful to write.”

Even more so to read.

Rice would be the first to admit that this novel is different than his previous works, not only in substance and theme, but also in that its inspiration has been percolating for years, and was inspired, in part, by his absolute intolerance of abuse to women, an issue that rivals only gun control for top billing in today’s media.

“I was sick and tired of watching women get murdered,” he says, acknowledging that it was actually a scene from the movie SAW that was described—but one that Rice has never seen first-hand—that sparked Pierce’s formidable character. “I was so freaked out by the description of the scene…I became fixated on it. I knew then that I had to make Pierce a vigilante, wanted to show what can happen when that power dynamic is completely reversed.”

Pierce has justification for revenge. She spent her childhood being raised by a pair of serial killers who murdered her mother. Sadly, her rescue, seven long years later, brings little in the form of relief—her birth father exploits her story for fame and profit, until finally she is able to break free.

Pierce is trying to build a new life, a new identity, when she is thrust into yet another terrifying new ordeal involving a serial killer. Haunted by her past, and now pumped full of an experimental drug that gives her shocking new powers, Pierce emerges from the shadows no longer a victim, but a magnificent avenger.

The “supernatural” angle is infused with such precision, it doesn’t detract at all from this character-driven work, which even to Rice feels a little “bigger,” more “commercially viable” than his previous books, most of which have garnered extraordinary success.

“It’s a very high concept idea that took many years to get right,” Rice says.

Not to mention timely. In the wake of the #MeToo movement, society is clamoring for strong, fearless females not only in real life, but also on the page and on screen. That said, the timing of this book is almost coincidental because most of it was conceived, and partially written, more than 10 years ago.

“I like to believe I’ve always been in tune with these issues,” he says. “But as you go through pop culture, you can watch over and over again how women are brutalized. There was an immediate sense of connection.”

As an openly gay author, Rice admits he’s dealt with his fair share of abuse, less than in recent years, though still something he considers every time he finds himself in a new environment, or sadly, one infused with alcohol.

“My walk or manner of speech can sometimes draw the attention of a homophobe,” he says. “It can still be dangerous and tricky to navigate the world without that.”

Rice is accustomed to attention. As the son of the incomparable author Anne Rice, the spotlight has long been finely tuned on his family, but Rice—with the support of his mother—has carved out his own niche in the literary world, steering clear of vampires, and turning to romantic suspense, erotica, and what he calls sci-fi crossover books. 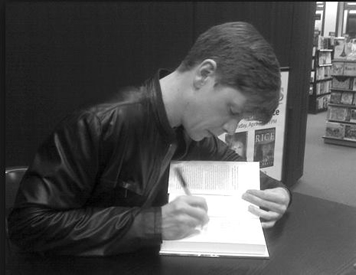 “Give me the story that takes readers into the dark, and then leads them back out again,” he says. “I like multiple points of view, and stories about extraordinary things that happen to people. I have a great love of my mother’s books, but I never set out to be a reflection of her.”

And to be honest, despite his literary pedigree, writing is a far cry from how Rice envisioned his life.

“I really thought I was going to be an actor,” he says, admitting that his lack of success on the stage was disheartening at first. “I turned to writing as a refuge.”

And with his mother’s encouragement, Rice began writing books featuring characters that speak to his heart. For now, and perhaps into the foreseeable future, that’s Tamara Pierce. Book two in the Burning Girl series, Blood Echo, launches February 2019.

No doubt you’ll be ready for it the second you finish BONE MUSIC.