A Return to Roots 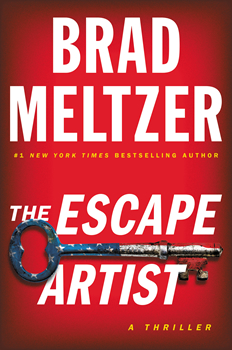 It’s not a stretch to say Brad Meltzer has the golden touch.

Whether he’s writing New York Times bestselling thrillers or acclaimed nonfiction work or collaborating with a stellar lineup of artists to create epic graphic novels or children’s books, Meltzer is a true literary renaissance man, with many more successes in his wake than missteps. But what’s often lost in the glow of victory is the toil, sweat, and slog that got the writer there—and Meltzer is no exception.

For 20 years, Meltzer has built a varied and engaging library of work and reached the peak of every mountain he sought to climb. But even with those milestones in his rearview, he still found himself in need of a refresh, or a quick turn back to the kind of stories that made him want to write in the first place.

THE ESCAPE ARTIST is that book. The novel introduces readers to the enigmatic Nola Brown, who is believed dead in a mysterious incident in the opening pages of Meltzer’s riveting return to form. But Dover Air Force Base staffer Jim “Zig” Zigarowski thinks otherwise. Zig, who helps put to rest the bodies of those that die on super-secret missions, has a personal connection to Nola. The woman saved Zig’s daughter’s life, and for that, Zig is eternally indebted to her. When Zig discovers Nola might still be in the land of the living, he takes a deep dive into her past in the hopes of finding her.

THE ESCAPE ARTIST makes for a fast-paced and highly readable romp loaded with historical nods and seeped with the conspiratorial touches that Meltzer readers have come to love and expect. But the book does not skimp on emotional and character beats, harkening back to Meltzer’s earliest, character-driven novels with the added sheen of two decades of experience in the writing realm. So, while the novel can be classified as an author returning to his thriller roots, upon closer look it reads more like the sharp pivot of an artist taking on his latest, greatest form.

And that’s just how Meltzer wanted it.

“This is the 20-year anniversary of me as a writer,” Meltzer said. “Which just shows what a child I was when I was lucky enough to get started. And the reality is, you can’t help but get nostalgic. Especially for someone like me, who’s obsessed with history. So, I looked back and felt like… ‘You know what? I think some of the books got a little plot heavy and what did those early books do that I loved so much?’ And the answer was, they were totally character-driven. The best plot is always a good character. And I just decided I’m not starting this book until I have the character.”

That bolt of inspiration hit Meltzer while on a USO tour visiting American troops, sponsored by ITW—and in turn, got his mind ready for the eventual appearance of Nola Brown in his mind’s eye.

“I got lucky enough to go on one of those tours,” Meltzer said. “I really got to experience this place called Dover Air Force Base, where the victims from 9/11 on the Pentagon flight were taken, where the space shuttle victims were taken, where the victims of the USS Cole were taken. It’s also where every single kind of secret spy that’s on some mission no one can talk about, they go there too. I quickly realized that Dover is a place that is filled with secrets and mysteries. How could I not set a book there?”

While the setting percolated in the back of his mind, Meltzer continued with his myriad projects—including the TV series Lost History. During filming, he ran into the elements that would, in large part, make up his new protagonist, Nola Brown.

“We were looking for the 9/11 flag on the very first episode of Lost History,” Meltzer said. “And they decided to film it at this Army museum that’s on base. As they’re giving me the tour of the museum, I see that this place has the paintings of all these military men and women. And I’m looking around going, ‘Why is the Army suddenly collecting all this art?’ It made no sense to me. And they took me over to a room of someone who, they explained to me, was the artist in residence. Since World War I, the Army has had at least one painter, a painter of all things, rushing into battle. So while we’re storming the beaches of Normandy, there’s someone painting. While we’re in Vietnam, there’s someone painting. Yes, we have videographers and we have photographers, but all they can do is show you a moment.”

No stranger to following the thread of inspiration, Meltzer knew there was something to the idea of an on-scene war painter, and tugged on the strand to learn more. What he discovered added to the urgency of Nola’s eventual creation.

“So I was like, ‘You’re telling me that for all these decades, while everyone’s been running into battle with guns, there’s one person who is running into battle with nothing but paintbrushes and colored pencils in their pockets?’ And they said to me, ‘Yes, she is.’ I was like, ‘She?’” Meltzer said. “My own masculinity got the best of me and I realized, ‘Of course it’s a woman.’ She’s amazing. And I just became obsessed with this job and I thought, ‘that person, whoever she is, must be the craziest person ever. She’s literally running to giant dangers with nothing but art supplies in her pockets.’ There was the character. I knew the moment it came to me. It was that my artist could find a weakness in anything. When she paints she sees things that otherwise she wouldn’t see, and Nola was completely, fully realized in a way that I’ve rarely had with any single character in 20 years.”

With Nola in place, Meltzer knew THE ESCAPE ARTIST needed a foil—not only for the book’s mysterious and eventual protagonist—but also for the reader, as a way of trumping expectations and circumventing some genre tropes.

Like most of Meltzer’s fiction, THE ESCAPE ARTIST has a solid and deep historical foundation, a byproduct of the author’s passion for research. His journey took him to some surprising corners, he admits, including an encounter with the famed magician, Harry Houdini. The planning for the novel also found Meltzer standing in front of a proverbial mirror, and realizing this was the latest iteration of his journey as a writer, which often runs parallel to his own private life.

“Every book as I get into it is just what I’m dealing with at that moment in my life. My first book that got published, The Tenth Justice, was about friends who were just excited to be out of college, they were all living in a group house. Then the book after that I got married, and my characters got married,” Meltzer said. “The book after that, I dealt with the death of my mother, the death of my father… All these different things, they’re obviously always what I’m dealing with at that moment.

“And for me, maybe it’s 20 years, maybe it’s just a maudlin excuse for it, but I felt like I had two things that were happening. When we were doing Decoded, we did an episode on Houdini. And I learned that a man named John Wilkie was put in charge of the United States Secret Service. He was a friend of Harry Houdini and he loved doing magic himself. It is the only time in history that a magician was put in charge of the Secret Service. I could not shake that. Then, somewhere in my own life, I realized, and I really learned it at Dover—I went there and watched where we were putting to rest these children, these children of war, who are giving their lives and are in their twenties. And it just made me realize that just because you’re living doesn’t mean you’re alive. Then I started researching Harry Houdini and I realized that was his thing too. Harry Houdini was just never happy. The guy was the most famous man in the whole world, and it was like he was dead the whole time. He couldn’t figure out his level of happiness, he couldn’t figure out how to forgive the death of his own mom. He just couldn’t let it go.

“That’s where it, slowly over time, I started seeing it all come together,” Meltzer said. “I just saw this character in Zig who couldn’t forgive himself for the death of his daughter. I saw this character and Nola who could not forgive her own self for what had happened to her when she was a girl and what happened to her as she got older. And so all that, including Houdini, coalesced into THE ESCAPE ARTIST.

“One fun thing I discovered was that Harry Houdini was so obsessed with death that he gave all of his nearest and dearest a code word,” Meltzer said. “So that if they were to come back from the dead and he went to a séance and the person who was running the séance, which were big back at the time, and any of them were actually really the ghost of who they were, he would have the code word that only he and them knew. So that way any kind of fraud séance person, or fortuneteller wouldn’t be able to say, ‘oh your mom’s here, oh your wife’s here, oh your friends are here.’ And the word that he gave to his mom was the word, ‘forgive.’ And there it was, the book. I realized in looking for that theme, I was just looking at my own life.”