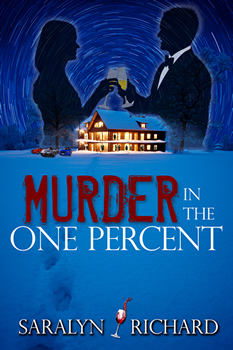 Locked room mysteries have enthralled readers since Edgar Allan Poe’s “The Murders in the Rue Morgue” effectively launched the modern detective subgenre in 1841. Everyone from Agatha Christie to Japanese mystery master Soji Shimada has tackled the tantalizing setup: someone is murdered in a confined space with no obvious access or means of escape for the killer, and a detective is tasked with unraveling the seemingly impossible crime.

Saralyn Richard pumps fresh blood into the locked room scenario with MURDER IN THE ONE PERCENT, out now from Black Opal Books. Richard, a former teacher and successful children’s book author, transports the familiar premise to an extravagant dinner party at a Pennsylvania horse farm, where a young African-American police detective named Oliver Parrott is called in to investigate the murder of playboy and former Secretary of the Treasury, Preston Phillips.

Richard spoke with The Big Thrill about making the transition from kidlit to adult fiction, the allure of her novel’s posh setting, and the singular demands of writing a locked room mystery in the 21st century.

Author Ann Weisgarber calls the novel “an American cozy with nods to contemporary social issues” and “a page-turner packed with humorous lines.” Did you set out to create a novel with those strengths, or did your plot and characters evolve as you wrote?

I’ve always been fascinated by the way people regard wealth. Some cherish it; others see it as an encumbrance. Some earn it, inherit it, or marry into it. The elegant dinner party in America’s wealthy horse country seems a perfect setting for exploring what might happen when death, the great equalizer, pays a visit.

The fact that the book mirrors contemporary social issues is partially coincidence. I did enjoy juxtaposing the behavior of the party guests against that of the personnel solving the crime, but I never had specific, living people in mind while creating the characters. That readers find humor in the dialogue of the book is testament to their intelligent, clever, and spirited minds.

Your children’s picture book, Naughty Nana, has done well, so what made you decide to write a mystery aimed at adults?

It’s a unique thrill to write for youngsters, to connect with their imaginations and understandings of the world. Still, I have always wanted to write adult mysteries. The genre provides opportunity for writer and reader to engage in an intellectual and emotional adventure. The wellspring for story ideas has less to do with niche and more to do with genuine observations and inspirations from people and situations I’ve known, both real and literary. I’m delighted with feedback from readers, no matter their ages.

I loved to read that you were a teacher who wrote on the side but are now a writer who teaches on the side. How has teaching shaped your writing projects?

Teaching and writing have common elements. Both require organizing, implementing, and evaluating. Both require skill and insight. There is a symbiotic relationship between the person performing and the person receiving. As a teacher, I practice breaking down literature and writing into their essential parts. Knowing what it takes to make a work of literature is a great first step to creating one.

The cover of MURDER IN THE ONE PERCENT shows high-class people partying at a large home in the snow. Why did you choose that setting for a murder mystery?

There’s something about a fancy party that fires the imagination. From elegant invitation to opulent decorations to epicurean delights, a party provides an extraordinary setting where anything can happen. We don’t all have the regular opportunity to partake in such spectacular events, so I give readers a behind-the-scenes look at what it’s like to attend a gathering at the home of one of the country’s wealthiest people.

You mention that this book is really a “locked room” novel. What are the pros and cons of writing such a novel? It presents an intriguing puzzle for the reader, but is it difficult to plot and write?

Poe’s “The Murders in the Rue Morgue” is considered the first locked room mystery. In the story, a French woman dies in a fourth-floor locked room. No one enters or leaves, so solving the murder seems impossible.

In MURDER IN THE ONE PERCENT, 15 people attend a weekend party during a snowstorm. After the lavish party, the guests retire to their rooms. When they reconvene, one of them is found dead—coincidentally, on the fourth floor. The fact that all the guests are wealthy and powerful citizens with unblemished reputations is enough to worry the detective and the police chief, but it also worries the other guests, and hopefully the reader, too.

One problem with today’s locked room mystery is technology. Current methods of investigation, using DNA typing, sophisticated autopsy and toxicology testing, and data, make the “impossible” unrealistic. Still, there is a certain appeal in reading a mystery where suspects are “locked” in a particular setting at the time of a murder. No comings or goings, and multiple people have means and motive. Like the detective, the reader must work out the possibilities within the narrow confines of the small setting.

Without spoiling the ending of “The Murders in the Rue Morgue,” I’ll say Poe comes up with a highly improbable killer. MURDER IN THE ONE PERCENT, though less preposterous, poses a similar challenge for the reader.

For all writers, “real life” makes demands on time, energy, and focus. How do you balance writing with other demands and interests? How long did it take you to write the book? How did you manage your time?

Like all commitments, writing starts with a mission, idea, goals, and action plan. Building the internal motivation and discipline to carry out the project is key, and, for me, the hardest part. Once I’ve settled on a story to tell, my real life and my writing life merge.

The regular meetings of my writers’ group and outside influences, such as National Novel Writing Month keep me moving forward, but, truthfully, once I embark on a story’s journey, I’m living with the setting, plot, and characters 24/7. They’re so much on my mind that I even dream about them!

Also, for the two years of writing and revising MURDER IN THE ONE PERCENT, I’ve had an encouraging critical friend: my husband. Preston Phillips, Oliver Parrott, and the other characters have invaded our home and our conversations. They are quite real to us both.

Lastly, what are you working on now? Will you continue to write for both children and adult audiences?

One question I ask schoolchildren during Naughty Nana presentations is, “What would you like to see Nana doing next?” The answers are so fun and varied that I’m itching to bring some of them to life. Also, Nana the sheepdog continues to inspire adventurous plots.

Of course, I’ve just revised a standalone mystery, Murder at Lincoln High, and I’m starting another Detective Parrott mystery. Parrott’s perspicacity, moral compass, organized thinking, and empathy make him a stellar character, too good to keep on the shelf. At 26, he’s just getting started.

Mystery and children’s book author, Saralyn Richard, has been a teacher who wrote on the side, but now she is a writer who teaches on the side. Some of her poems and essays have won awards and contests from the time she was in high school. Her children’s picture book, Naughty Nana, has reached thousands of children in five countries.
Murder in the One Percent, soon-to-be-published by Black Opal Books, pulls back the curtain on how the privileged and powerful rich live, love, and hate. Set on a gentleman’s farm in Pennsylvania and in the tony areas of New York, the book shows what happens when someone comes to a party with murder in his heart and poison in his pocket.

When not writing, Saralyn likes going to movies and concerts, traveling, and walking on the beach with her husband and two dogs. A member of International Thriller Writers and Mystery Writers of America, Saralyn is revising her second mystery.

To learn more about Saralyn, please visit her website.