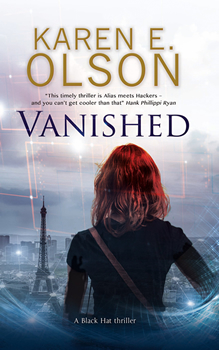 There is a bounty on Tina Alder’s head—and so, she hides within an ordinary life in a small town. She earns cash for watercolor paintings and has no internet footprint, no bank account, no phone, and no permanent address. She doesn’t use computers; not even the anonymous ones at the public library.

So when Tina, a former hacker, needs a fix, she enters the library to peruse books while casting hungry gazes at the bank of computer terminals. To go online would risk exposure and in today’s connected world, safety can’t be taken for granted—even if you live small. Tina’s go-bag is packed and ready.

But when Tina meets an older woman at an art show she is thrown off her game. The woman seems to know more about Tina than she should. The compulsion to know who this woman is leads Tina to a laptop. She knows better. Her safety depends on staying off the grid. But the compulsion is mighty, and Tina does the one thing she shouldn’t do. By the next day she is on the run.

VANISHED is Karen E. Olson’s fourth novel in the Black Hat series. It is extreme in pace with intense, non-stop action—and it may make one pause next time they log online or use an ATM.

How was Tina born?

This series began with a voice in my head and I had to figure out who was talking to me. I started with the first sentence of the first book: “I’ve been running for 15 years.” I had no idea who was missing or why, but I thought it was intriguing. I mulled it over a while and found an article online about a bank cyberheist in 1995. I realized that the person who was missing was a hacker who’d stolen $10 million from bank accounts online. I knew by then that it was a woman, and I pondered where she could be “missing” for 15 years. Block Island, off the coast of Rhode Island, is a lovely little island and that’s where I put her: living off the grid, no computer, giving bike tours and painting. She had a whole world there until someone from her past showed up.

Tina has evolved over time—in each book we find out something new about her, and she’s coming to grips with what she did and what she’s capable of, computer-wise. I didn’t even know what her real name was right away.

Betrayed was the third book in a three-book story arc. Why continue with VANISHED?

My publisher asked for another book. I was very happy to get a fourth book in the series because I felt (and still feel) that Tina’s story isn’t finished. Tina is struggling with who she is and how she wants to live her life: does she want to be a hacker or does she want to go legit with the FBI or does she truly want to go offline forever? She is a very intricate, complicated character and I’ve loved getting to know her. I created a new character in Betrayed, Spencer Cross, and I was thrilled to be able to make him a key player in VANISHED because I really fell in love with him and saw a tremendous opportunity to weave him back into Tina’s story. I’ve had a lot of fun (and a lot of paranoia) with the plots of the books, and there’s no lack of inspiration right now.

The previous books make a statement on privacy. What do you think about the social media requirements publishers place on their authors?

I have problems with social media, but sadly, it’s part of the new fabric of our lives and I don’t think we can really turn back now. I do like it for keeping in touch with people, but I don’t think it really does much to sell books, so it’s definitely more a personal thing. I don’t have an author page on Facebook because it seems redundant and too much work. I have a blog, but if you look at it, I haven’t actually blogged since 2016. I think blogs are out of vogue. I will admit that I hate Twitter. I find it too ADD. I do like Instagram because I don’t have to say anything, just post a picture. It’s pretty low maintenance.

You have a day job at Yale University Press. What does that entail?

I work exclusively with the executive editor who acquires law, politics, history, and economics books. Most of our authors are scholars, but not all. Every book goes through peer review and three committees before being approved for publication.

I do developmental and line edits. I’ve worked on a biography of Hubert Humphrey that’s coming out this summer; a book about how corporations are people too (surprisingly, this book is very convincing) that will come out this fall; and one about white women who owned slaves before the Civil War that will come out in spring 2019. I also write and edit catalog and jacket copy, and solicit peer reviews and blurbs. I draw up profit and loss statements to make sure a book will be financially feasible, and do the initial paperwork for contracts. And while I know how to read a contract, I have no idea what royalties on reserve are. They remain a mystery.

It’s been fascinating being on the “other side” of publishing. Also, being published myself helps tremendously when working with my authors, as I’ve been in their shoes. Even though we’re writing different things, the publishing process for nonfiction and fiction isn’t all that different.

You have a background in journalism. How are we faring in today’s political climate?

I think it’s actually gotten stronger in coverage of national issues. Granted, newspapers especially are still floundering print-wise. They never really figured out how to compete online, but I think more people are paying attention to the news. I think most people haven’t bought into the “fake news” line that the current administration is touting. The New York Times and the Washington Post are doing a tremendous job with fact checking and reporting.

Despite more national coverage, community newspapering, or local news, is on the losing end. I was a town reporter—so was my husband—and people want their local news. They want to read about the planning and zoning decisions, the school board, and other things happening in town. Newspapers are cutting those reporters, and I have a feeling that without those watchdogs, corruption could easily slide under the radar. 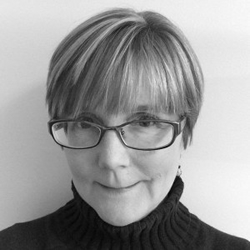