The Essentialness of Risk 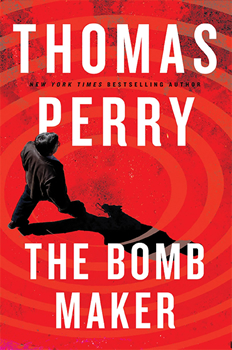 The world is never a gentle place for the people who inhabit thrillers, but the heroes of THE BOMB MAKER have it worse than most. In Thomas Perry’s latest novel, even the most casual action—the twist of a doorknob, the flip of a light switch—can bring instant and spectacular death.

Perry’s 25th novel, out this month from Mysterious Press, pits a retired Bomb Squad commander against a bomb maker intent on terrorizing Los Angeles. There is, of course, a twist: the bomb maker isn’t particularly interested in killing civilians. It’s bomb technicians he’s after—particularly those wearing LAPD badges. When one of his devices wipes out half of the city’s Bomb Squad in a single, horrific explosion, the unit turns to its former leader, Dick Stahl, to guide it through a lengthy rebuilding process. The bomb maker, though, has other ideas. Hours after the mass murder of more than a dozen of his former colleagues, Stahl is forced back into the field, working to disarm (or safely detonate) a series of increasingly elaborate devices engineered to anticipate his every move.

“I’ve been thinking about the general topic of bombs for 47 years—since 1970, when I was in the Air National Guard and was sent to Lowry Air Force Base in Denver to learn to be an Air Force weapons mechanic,” says Perry, whose job then was to load ammunitions on fighter planes and perform routine maintenance on the delivery systems. “I became aware of the nature and behavior of explosive substances and the devices for detonating them. At the time, this prompted me to think primarily about the use of explosives in war. Events over the subsequent years made me think about the uses of explosives by terrorists. The subject has been in the back of my mind for a long time, and I finally got around to writing about it.”

The result is a page-turner broken down into a series of nerve-shredding, expertly crafted set pieces. Since the bomb maker’s devices are designed to outwit even the most skilled technicians, Stahl and his colleagues are essentially walking into a deadly puzzle box every time they set out to disable a bomb. Steady hands and steel nerves aren’t enough; every bomb is an act of psychological warfare.

“What I was after in each of these scenes was the contrast between the person who plants a terrible device intended to kill people he’s never met and the technician who has to gamble his existence on guessing correctly about the structure of the device and the traps built into it,” Perry explains. “The big scenes are visual representations of the technician’s predicament.” 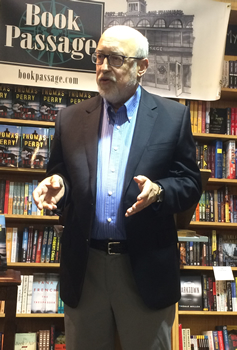 While the bomb maker’s choice of weapon doesn’t exactly allow for face-to-face confrontations, the meat of the story is the contrast between two men who have chosen to expose themselves to some of the most dangerous materials and processes on earth, albeit for very different reasons.

“The difference between the nameless bomb maker and Dick Stahl are the differences between a person who wants power to harm and a person who wants power to help,” Perry says. “The bomb maker has the worst kind of ego problem. He’s got a big ego that’s been thwarted and hurt, and now he’s become an arrogant creep who loves only the power he can unleash to make people afraid of him. Stahl has the qualities of a real first responder. He has self-reliance built on years of observation and experience, and he has deep loyalty to the rest of the human beings in society.

When most of us hear a shot close by, we run or take cover. When a cop like Stahl hears it, he runs toward it. Many of us have seen this happen and it’s quite a stark contrast. Stahl is, specifically, a cop who sees an unfamiliar device and says to himself, ‘Somebody has got to go up to that thing and figure out how to render it safe before it kills people. Today that’s going to be me’.”

What you won’t find, though, is anything that resembles the classic bomb-defusing clichés you might expect from the story’s setup. If a bomb tech in Perry’s book is faced with anything as familiar as a ticking clock or a pair of wires to choose between, he’s probably already made a fatal error.

“I think we all try to banish or subvert clichés,” says Perry, on whether he consciously set out to upend those action-movie tropes. “It’s our job to present readers with something new. Bombs in movies are always elaborate factory-designed devices with lots of blinking lights and countdown clocks that beep. The scary thing about real bombs is that they can look like anything, and they can be any size from a few inches to the size of a tractor-trailer truck, and be hidden anywhere disguised in ways limited only by the bomb maker’s imagination. They can also be made of a vast number of compounds and be set off in thousands of different ways.”

And while THE BOMB MAKER delves far enough into the process of building and defusing bombs to satisfy fans of techno-thrillers, the story’s real focus is on the people who risk everything to neutralize the devices. The bomb maker himself is never given a name, but every bomb tech is a layered, fully formed character with a background and an interior life—even if he’s only on stage for a matter of minutes.

“I’ve always thought that if any of us will be remembered after we die, or after our publishers stop working hard to promote our books, it will be for whatever we’ve written that wouldn’t have existed if we hadn’t,” says Perry. “I think of the characters in books (mine and anyone else’s) as people, and I try to make mine as complex and inconsistent and evolving as real people are. They make mistakes and regret them, learn some things and decide to forget others. They feel fear, but they do their best to overcome it.”

For Stahl and his fellow bomb techs, those aforementioned mistakes can come with immediate and devastating consequences—an awareness that hovers over every scene and informs every interaction, including Stahl’s off-limits relationship with a female technician under his command. Death doesn’t simply linger on the horizon; in the world of THE BOMB MAKER, it’s a statistical probability.

Or, as Perry puts it, “The bomb maker can be wrong over and over, and lose nothing. The bomb technician only gets to make one mistake.” 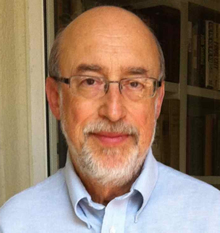 Thomas Perry is the bestselling author of 25 novels, including the critically acclaimed Jane Whitefield series, Forty Thieves, The Old Man and The Butcher’s Boy, which won the Edgar Award.

To learn more about Thomas Perry, please visit his website.