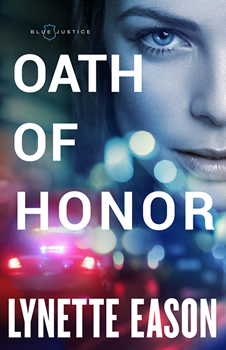 Like many crime fiction writers, Lynette Eason has always loved mysteries. She grew up reading Nancy Drew and the Hardy Boys, hooked by the idea that they were “just basically kids who solved mysteries.” Between those childhood favorites and a later love of Alfred Hitchcock, it seemed only natural that, when she finally began to write, it would be in this genre.

Asked about her writing journey, she says, “I started writing in 1999, but it took a few years before I decided to pursue publication seriously. I began attending writing conferences and working with a mentor and in February 2007, got the call that Harlequin’s Love Inspired line wanted to purchase my first book, which released in February 2008.”

Since then, Eason’s books have hit the CBA and ECPA bestseller lists and have won numerous awards, including the prestigious Carol Award. Her latest novel, OATH OF HONOR, is the first of a new series and was inspired by her love of the Tom Selleck television show Blue Bloods. “I’ve always loved the show,” she says, “so when it came time to write up the next proposal, I decided I wanted to write about a law enforcement family. I brainstormed the family and gave them all law enforcement jobs. Except for Ruthie. She’s the black sheep. She rebelled and became a surgeon.”

So how does a South Carolina mom of two with no police background write about a family of law enforcement officers? Primarily by interviewing law enforcement personnel and attending Lee Lofland’s Writers Police Academy, where she not only got to meet some of her favorite authors, like Kathy Reichs and Lisa Gardner, but also got to experience “some pretty cool things” like being an eye witness to a staged hostage situation and shooting at the bad guys in a virtual situation.

Congratulations on your new book—and thank you for taking the time to talk to us about it. Let’s start with the fact that you’ve written multiple series. What’s the secret of your productivity?

I’m fortunate enough for writing to be my day job so it’s what I do for eight to ten hours a day every day—or sixteen to eighteen hours when the deadlines close in!

What are some of the challenges and rewards involved in beginning a new series?

I ALWAYS have a tough time with the first book. With the first book in a new series, there’s that extra time involved in getting to know the characters, putting their world together and making sure everything is as accurate as possible. Sure, I have to do this in the rest of the books that follow, but usually I’ve at least had a passing acquaintance with most of the characters who will play the lead role in the future books. With Oath of Justice, I…wound up deleting 25K words, killing off one of the secondary characters…and then rewriting to make it all come together and make sense. It was a hard edit! But, in the end, it wound up being a good story and is getting some great reviews so I’m happy.

What makes Isabelle St. John the perfect heroine for a suspense series?

Izzy is a good cop. She’s smart and inquisitive and doesn’t take anything at face value. Not to mention the fact that she’s stubborn and has a pit bull type of mentality. Pair that with a massive sense of justice and she’s going to keep chipping away at the case and dodging danger until she finds her answers. Then there’s her softer side. She has a heart for [people who are hurting] and it can lead her to making decisions that aren’t always best for her. As a result, she occasionally finds herself regretting her tenderheartedness.

Isabelle struggles with some difficult decisions, including a conflict between integrity and loyalty. How do you weave these internal conflicts into the story, and how do they drive the plot?

Izzy has a very strong sense of right and wrong. If you do wrong, you face the consequences. Even family members don’t get a pass. So, when her brother is at a crime scene then disappears, it rattles her. She wants to talk to her brother to give him a chance to explain. But he’s not returning her calls and is basically avoiding her. That just makes her mad. She knows what she needs to do, but it could have some serious backlash in that it could endanger her brother—and get him kicked off the force. She really struggles with doing the right thing… And it kills her that she’s going to be the one to turn him in.

Can you tell us a little bit about your writing process?

I tend to start with a character sketch of my hero and heroine. From there, I try to visualize the opening scene and start writing. I do hit and run plotting. Meaning, I write until I get stuck then I stop and figure out where I’m going and how I’m going to get there. I use a writing software called Scrivener and it’s the best thing ever invented for writers.

Speaking of writers, what advice would you give to aspiring and pre-published writers?

I think my best advice would be: Just don’t give up… Of course, these days, it’s easier than ever to self-publish, but that doesn’t mean it’s not important to make sure that you learn the craft. Make sure the writing is top notch. Don’t put out unedited work. You can’t be the writer and the editor. Make sure others read your work and give you feedback.

If you’re aiming for traditional publishing, the same advice applies. Make sure you’re getting feedback from someone who’s farther along in the process. And if you get a rejection letter…go ahead and have a pity party, then get back on the computer and write some more. Conferences are a great investment in your writing career. Take advantage and go to as many as you can. Yes, they’re expensive and it may take you a year to save up enough. Plan for it in advance and do your best to go… Smaller conferences are often shorter and cheaper, but they’re usually very good and informative.

Writing can be a hard journey. It’s often a lonely one unless you can connect with other writers—like-minded people who understand where you’re coming from and how your brain works. Look for those people who are near you and form friendships with them. Get together and work together and build that support system that will be an invaluable asset for you. 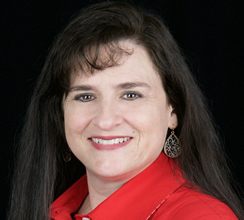 Award-winning, best-selling author Lynette Eason writes for Harlequin’s Love Inspired Suspense line and for Revell, a division of Baker Publishing Group. Her books have hit the CBA and ECPA bestseller lists and have won numerous awards, such as the prestigious Carol Award, the Selah, the Daphne, the IRCC award and more. Lynette is married, has two children, and lives in Greenville, SC.

To learn more about Lynette, please visit her website.