A Book That Sprung From a Dream 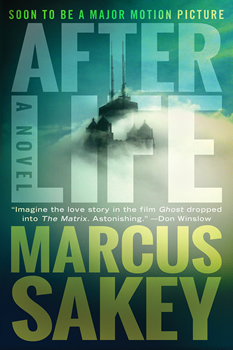 Marcus Sakey spent a year wandering the familiar streets of Chicago imagining dead people everywhere—pressed up against the glass at Starbucks, hanging out in luxury hotels, creating the kind of chaos that only the undead can.

It was a very different Chicago than the vibrant, beautiful and flawed city in which Sakey lives. And it—along with the premise for his chilling new book, AFTERLIFE—was born from a dream. Or perhaps, a nightmare.

“It’s usually hard to pinpoint where ideas come from, but this one I know—it came from a dream,” Sakey says. “I was in Chicago, a perfectly familiar Chicago except that everyone else was gone. And with that dream certainty, I realized I was dead. Everyone else wasn’t gone; I was. It was okay. It wasn’t a nightmare.”

“Then I woke up and saw my wife of 20 years sleeping beside me, and I imagined being in this world, but at a ninety-degree angle to it. Being near her but unable to speak to her, touch her, interact in any way,” he says. “And it became a nightmare. The kind with enough juice I knew I had to write it.”

The result is AFTERLIFE, a mind-blowing (and bending) thriller that examines the question: what if death is just the beginning? The story kicks off with an explosion that should kill FBI agent Will Brody. Instead, he wakes without a scratch, and through exploration of the dark and abandoned streets of his home town, he realizes that’s he’s somehow trapped in the afterlife—and it’s a terrifying place to be.

“We all wonder about what comes next. And we all assume that when we die, we’ll get the answers. If you’re religious, you expect to see your vision of the divine; if not, you expect blackness, and that’s an answer, too,” Sakey says. “One of the things that fascinated me about this idea was to imagine that you died and found yourself in a world without any answers.”

In this candid interview with The Big Thrill, Sakey answers a few of ours.

AFTERLIFE feels ambitious. And, as you yourself note, the story took several years to carve out to your satisfaction. What about this book—aside from the impeccable storytelling—gives you the greatest sense of pride?

I think writers do their best work when they’re scared of what they’re writing. Scared that it’s too big, too weird, too grand; scared that they won’t be able to pull it off, or that whatever they write will end up a pedestrian version of the thing they imagined.

Before you begin a book, it’s perfect. It’s this shimmering thing, wonderfully woven, ripe with possibility. Then you start writing it, and it falls to earth. That’s the way of things. You can’t let that stop you, and yet you also can’t get comfortable with it.

Honestly, I was scared every day I sat down at the keyboard. But early on I decided that it was better to swing too hard and miss than to play it safe and bunt. I hope people like the book, I really, really do, but whether they do or not, I’m confident that I gave it all I had.

AFTERLIFE is a bit of a genre bender, with clear elements from science fiction and fantasy, as well as thriller. How would you describe this book?

I generally call AFTERLIFE a “speculative thriller.” But honestly, my feeling is that genre is a tool for organizing bookstores. It tells you which aisles you do or don’t want to go down. That’s it.

For me, there are two kinds of writing: good and not. All an author can do, our whole job, is to bust our butt trying to land in the former. That means planning stories that inspire, rendering characters that people will miss, polishing every line, every word. That’s my job, and I love it, and I care far more that people enjoy the work than I care what they call it.

Often I can discern the underlying themes of a novel, but with AFTERLIFE there seem to be so many important messages, wrapped so beautifully between the mechanics of perfect storytelling and drool-worthy writing. Aside from a great read, and a story that demonstrates the power of love, what do you hope readers take away from this book?

Well, like all of my novels, there is a strong emphasis on responsibility and acting in the interest of others. On the surface, the mechanism of this world I made up can look quite grim, but I don’t see it that way—the people who keep faith, who fight for each other, they win, and they are rewarded. Which is something I believe about life, too.

I consciously set out to write a myth. The magical thing about myths is that they can be true without being real. That’s a defining characteristic. Consider the ancient Greeks—do you really think they believed the sun was a god in a gilded chariot, crossing the sky daily?

I don’t. I think they knew it wasn’t real. But it had a truth beyond its reality. The mere act of casting a story around it, like a net, puts form to the world. Stories shape the void. And I wanted to explore that, to write a myth that helped explain some of the things about our world that I do not understand.

Prior to this book, your most recent published works are the three in the Brilliance trilogy—which sold well over a million copies. Given that success, was it difficult to step away from that world and work with new characters?

Honestly, yeah, it was difficult. I’d spent five years with the characters in Brilliance, and I knew and loved them intensely. That’s especially true of the protagonist of those books, Nick Cooper. Every author has certain characters that they just enjoy writing, where sliding into their skins feels like putting on an especially nice suit. Cooper was always that way for me.

Congratulations on the amazing movie deal for AFTERLIFE—I am already itching to see this story on the big screen, particularly in the hands of the very capable Ron Howard. This isn’t your first book to movie adaptation—but I understand you’ll be writing the screenplay for this one. What challenges do you foresee switching gears to screenwriting?

This is the first time I’ve been involved in adapting my own work, and I have to say that as a screenwriter, I spend a lot of time hating the novelist.

Jokes aside, it’s hard. I want to be true to the book, and yet I also don’t want to write a four-hour film. The exciting thing, though, is that it’s a chance to tell the same story in a different way, with different tools. And I’m particularly turned on by what good actors will bring to it—that’s a very different sort of collaboration, watching an actress just kill on a line you wrote.

Beyond the screenplay for AFTERLIFE, what can your fans expect to see from you next?

I’m in the (very) early stages of my next novel. It’s far too soon to discuss specifics.

What I can say is that I love writing these big idea novels, books that find the heart of the plot in an idea extended outward. That’s what I did with Brilliance too, which explored an alternate present where 1% of people were born savants. When 1% of people are objectively better, how do the other 99% of us deal with it? I love building from that kind of concept.

I’ve always admired Michael Crichton. He didn’t concern himself with genre or labels. One book would be about dinosaurs, the next barbarians, the next nanotechnology. But they were united in that each was about an idea and everything that happened in the novel grew from that.