The Stories That Find Us 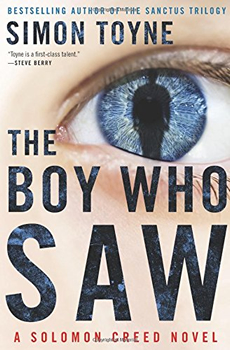 Turning points don’t always come at expected times in the career of a novelist. Simon Toyne didn’t immediately think of his new novel, still in the research phase, when the news photo of a drowned refugee boy from Syria flashed before him. The photo was shocking and upsetting to Toyne, an avid reader of the news, but not only because of his own political views or because he’s a father himself. The book he had begun working on was linked to the horrific internments of World War II—”people having to risk their lives and flee their homes and countries because of political upheaval,” Toyne says. At that moment, he realized  “nothing had changed.”

The epiphany made him more determined than ever to dive into darkness with his new novel, the second in a series begun with The Searcher, published in 2015. The Searcher introduces Solomon Creed, a fascinating character of extraordinary abilities but with a damaged memory. In THE BOY WHO SAW, Creed’s search for identity leads him straight to France and to a boy and his mother who are connected to the horrors of World War II. The twists in the novel are nothing less than astonishing.

Today’s political climate in Europe holds unnerving parallels to the 1930s, Toyne says. “The same political rhetoric that had been used to demonize refugees and foreigners in the 1930s was being used by the predominantly right wing media to allow people to ignore a humanitarian crisis. The photo of the drowned boy cut through all that. It spoke directly to us as humans and I felt that was what I was aiming to achieve in my book too—to tell a human story of the possible consequences of what was happening in the West with the shift back toward a right wing populism in politics.”

Sound ambitious? You bet. But Toyne is all about taking risks. “I like writing big stories with big themes,” he says. The depth of his ambition may have something to do with fiction being his second career. After studying English and Drama at Goldsmiths College, University of London, he launched a successful career as a television producer and director. He quit in 2007, just about the time of his 40th birthday, to write a novel. Toyne even turned down an offer to take a leave of absence from his TV boss. To make his personal stakes real, he quit that job cold.

As Toyne himself has put it: “So, with a couple of ideas in my head and the fear of failure lighting a huge fire beneath me, I quit my job and moved with my family to France for seven months with the intention of writing a commercial thriller.”

There was a decent amount of terror to this process, no doubt, and he did return to TV part time while he finished the book, but Toyne succeeded. His novel, Sanctus, was the biggest selling debut thriller of 2011 in the UK and an international bestseller, translated into 27 languages.

In the U.S., Publishers Weekly said that Sanctus’ “truly mind-boggling revelation will leave astounded readers eager for the next installment.” Lucky for them, Toyne was keen to do just that. He followed Sanctus with The Tower and The Key, also bestsellers.

The Sanctus trilogy books are page turners with apocalypse on offer, centering on an eerie citadel in a historical Turkish city. Religious secrets run through the books. “I think religion is one of the most interesting subjects there is, not only the specific history but also the anthropological study of what it means to us as humans,” Toyne says. “Whether you believe that god or gods created us, or the other way round, the fact that we are intertwined is undeniable. I would like to write smaller stories, not least because they would be quicker to write and would please my readers who are always waiting patiently for the next book, but the novels always seem to grow into these existential monsters.”

The Searcher, his next novel after the trilogy, looked at reality through a different lens, asking: what is identity? The novel opens with the townspeople of Redemption, Arizona, gathering in a cemetery when a plane crashes in the desert.

When the sheriff speeds to the crash, he nearly runs down a tall, pale man running away from the plane: There are no shoes on his feet and he has no clue who he is. The emerging possibilities are tantalizing—and terrifying. “Toyne has turned out a subtle yet compelling religion-flavored thriller that engenders a ‘one more page, one more chapter’ urgency, much like his previous trilogy,” said Library Journal in its starred review. It’s not only readers who were intrigued by The Searcher. It was optioned for television, and Toyne reveals that the project has “a top drawer TV director already attached and a big name actor also very interested in starring. I can’t say anymore.”

Toyne’s novels in the series revolve around the essential mysteries of Solomon Creed. At the end of the first book, one of the only clues to Creed’s identity is a label stitched in his jacket that reads “This suit was made to treasure for Mr. Solomon Creed.” It is his attempt to find the suit’s tailor that ignites the plot of THE BOY WHO SAW.  It is also Toyne’s turn to set one of his novels in a real place, a town in southern France. “I did feel a bit apprehensive writing about a real place in this new book because I normally make a place up so that I can have free license with it.  For this book though I felt I needed to anchor it in reality as much as possible because of the theme of learning the lessons of history, so I used a town in France called Cordes-sur-Ciel, which I know very well as I live there for some of the year.”

Toyne’s writing is rich in atmospheric detail—creating an unsettling, eerie mood. “I do work very hard on the language because I think it’s as much part of the enjoyment of reading as following the story and a key part of the storytelling,” he says. “Writing for TV, which I did for nearly 20 years, is all about structure and dialogue so you never get to exercise your descriptive muscles as far as languages goes, which was one of the reasons I wanted to try writing novels.”

Toyne hastens to add that he doesn’t let himself get too carried away. “Whenever I try to describe things in my books, I always try and do it in the most efficient way possible so as not to get in the way of the story or the pace, which are paramount in thrillers.”

Another aspect of writing crime fiction comes to the fore in Toyne’s career when he hosts a new UK television series called Written in Blood. Starting in September and running 10 weeks, Toyne meets with other authors to discuss how their work has been inspired by real life crime. In the first episode he meets Mark Billingham to talk about the honor killing of Banaz Mahmod. The other authors featured include Peter James, Alex Marwood, Angela Clarke, and Luke Delaney.

“It will hopefully air all over the world, including the U.S. and Canada,” Toyne says.

Time for a hashtag social media campaign to send Written in Blood far and wide? We’d say so!