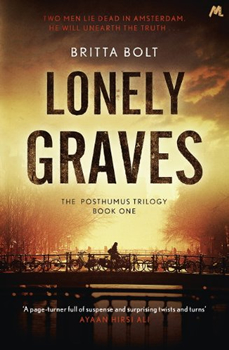 On holiday in the Canary Islands, German lawyer Britta Böhler sat on a balcony gazing out to sea, nursing a Rosé and reading a Nicci French thriller. Suddenly she thought: “Why not?” She wanted to write crime novels, but maybe not by herself.  “I immediately thought of Rodney (Bolt) as a partner,” she says, “even though we had never talked about it and I had no idea if he wanted to write crime books as well. I thought he would probably think I was crazy.”

Little did she know, Rodney Bolt also secretly harbored a desire to write crime fiction. “I never quite took the step, because I was nervous about my ability to come up with good plots,” he says, “and my lack of background in the field.” A South African writer of travel stories and biographies, he and Britta had met years before through a mutual friend in Amsterdam, where they have both lived since the 1990s. So when Britta’s email proposition arrived, completely out of the blue, Rodney replied within minutes. “Fantastic idea,” he wrote. “Let’s do it!”

And that’s how the collaborative author Britta Bolt was born in 2010. Two years later, the first book in the Posthumus Trilogy was published—first in Dutch under the title Heldhaftig. LONELY GRAVES, the English version, was released in 2014. (Although originally written in English, the book was translated when a Dutch publisher made the first offer, and has since also appeared in German.) Lives Lost (2015) and Deadly Secrets (2016) completed the trilogy.

Crime fiction was not Rodney’s first run-in with the police. Before leaving South Africa, he worked with the Upstairs Theatre in Durban. His anti-apartheid play Gandhi: Act Too won a Critics’ Circle Award before police closed the theatre. He read English literature at Cambridge University in the U.K. and after graduating, worked as a writer-director in London until moving to Amsterdam.

As a lawyer in Germany, Britta worked on high-profile terrorism and security cases. She moved to the Netherlands because her partner is Dutch. “For job reasons, it was easier for me to move to another country than him,” she says. “Originally, we planned to stay in Holland for only a couple of years, but you know how things go… I loved Amsterdam, founded my own law firm there, and stayed.”

I do know how those things go. In the interest of full disclosure, I should mention I also live in Amsterdam and my psychological thriller Calvin’s Head is set there. So I fully agree with the two authors when they say Amsterdam is one of those cities, like Venice or Paris, that has a character entirely its own—not just “any old big city with a twist.” Also, the Dutch capital attracts all manner of people, and allows them to live jumbled together in the same street, sometimes even the same building. The coming together of different worlds—their clashes and coincidences—essential to crime fiction can happen quite naturally. 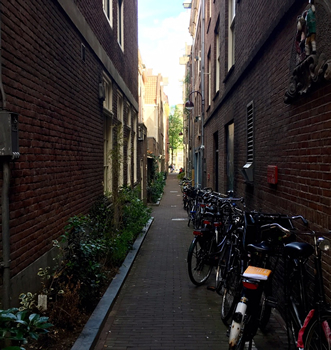 It was one of these coincidences that led Britta and Rodney to their unusual Dutch protagonist Pieter Posthumus. “We were determined not to have as our hero a middle-aged, single, alcoholic ex-policeman. Also, not a lawyer or a journalist. We were pondering where to go when we were at a dinner party given by the friend who introduced us. A radio producer was talking about the documentary she was making that featured Amsterdam’s ‘Lonely Funeral Team,’ which gives a good send-off to those who die alone, or to anonymous corpses found within the city limits. The city council commissions a poet to write an elegy, pays for flowers and a few cups of coffee (should anyone attend), and at least one of the team goes to the funeral. It’s a touching institution, and for us had something of the essence of quirky, convivial Amsterdam. We knew we’d found our man.”

Rodney spent time working with the real Lonely Funerals Team, going on house visits and to funerals. He discovered the original raison d’être for the municipal department was to look for wills and insurance policies, for evidence of friends or family connections, and to see if there was enough money in bank accounts to pay for the funeral. “Our hero, Pieter Posthumus, takes this a bit further,” he explains. “His insatiable curiosity, and a working day spent making stories from the flotsam and jetsam of people’s lives, means if he spots something that doesn’t quite fit, as he’s sifting through photos, looking at bookshelves, flipping through a CD collection, he just can’t let it go. And that gets him into all sorts of trouble…” 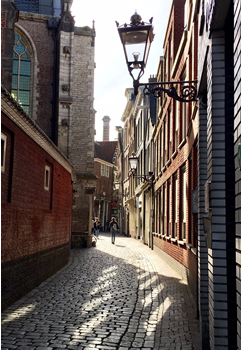 Posthumus and his team are a fascinating and unique take on the traditional police procedural or private investigator genres, and leads them to a multicultural array of cases in the three books involving terrorist cells, sex trafficking, environmental issues, and more. Exploring the lives of victims from found objects also opens a window on the rich cultural and social history of Amsterdam. It has an additional effect on the way the authors’ stories develop.

“When I write, the scene runs in my head like a movie,” says Rodney. “As Posthumus is examining a room, I see him doing it, see what he picks up. Sometimes those are things we’ve spoken about, sometimes things I had no idea were there…and it’s odd how those objects often become significant later on in the story. I’m sure some of them cause problems for Britta and the plot, further down the line. But perhaps she should say something about that!”

“Well, putting together a plot for a crime novel is a puzzle,” she says. “And when objects just popped up, so to speak, it was great fun to work out how they could fit into the story. A plot is a work-in-progress, at least for me, and things can change along the way. In Lives Lost, I had a completely different murderer in mind at the beginning. But it became clear the original idea wouldn’t work, so we changed it.”

Writing as a team is a process they both enjoy. Their original plan was that Britta would provide the plot and Rodney would do the words. But as characters developed wills of their own, stories changed course and incidents took them by surprise. So at what they call BriBo meetings around Rodney’s dining room table, they spent a lot of time talking ideas through…sometimes, as Britta puts it, like excited children baking a cake together. But it’s their individual talents that make the recipe a success.

“Britta is superb at keeping hold of the larger picture,” says Rodney. “She also has a huge wealth of personal knowledge and experience, formidable powers of research, and comes up with great ideas.”

Britta shares in their mutual admiration. “I love Rodney’s writing! He has a flawless feel for the atmosphere we both want to convey and a superb eye for detail and characterization, His dialogue is fantastic, fast-paced and ‘real.’ And above all, his writing has this subtle, tongue-in-cheek wit which is perfect for our main characters.”

The publication of Deadly Secrets marks the end of Britta Bolt’s planned trilogy. But such an engaging protagonist, with such a bizarre occupation in a city so full of shifting attitudes and secrets to uncover, surely has tremendous potential to explore further stories. Has Pieter Posthumus really attended his last lonely funeral? “Ah, watch this space,” says Rodney. “At the moment, a British production company has an option on the books for a TV series. If something comes of that…”