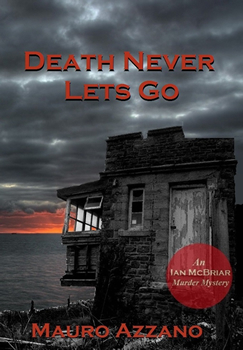 In a series of brutal murders, three young women have been killed on the subway, and panic spreads through the transit system. To make matters worse, one of the investigating detectives is considered a suspect. Detective Inspector Ian McBriar and his team need to track down the real killer before more lives are lost. The one thread that links the deaths together is a thin one, and the only thing the murders have in common is something that makes no sense. This may be Ian’s last case: ghosts from his past, and a chance for a better future, could change his life.

DEATH NEVER LETS GO is the fourth exciting instalment in the Ian McBriar Murder Mystery series, set in Toronto in 1975, the story of a Metis police detective who conquered bigotry, prejudice, and his own personal tragedies to succeed.

I let this book pretty well write itself; the characters did what they wanted to do, and I just wrote down what they told me.

When a tragedy happens that implicates an innocent person, the first instinct, the one that says “that can’t be right” is the one that proves to be correct.

Know when to let go. This book tells the story of different people who do too much rather than allow things to happen. In all the cases, letting things go on their own would have caused less harm.

All of the Ian McBriar books are set in the 1970’s. While the first was set in that time for a technical reason of the plot, I soon discovered that this gave me the flexibility to write about the people, not just the technology.

The interactions between the characters is what makes them people we care about; Nobody cares about a mass spectrometer.

The genre has sometimes been marginalized as a dime-store novel type of work, and I hope my humble books show a broader horizon for police mysteries.

I spoke to a lot of regular “working Joes” doing research for this book. The number of people with incredible hidden stories was amazing. From a Shoshone medicine man who was a U.S. Army tracker in Vietnam, to a woman who quilts blankets for the homeless, to a mechanical engineer who recycles plastics, every one had a story to tell.

This is the first book where I knew before the end was written who the bad guy was. In all the previous ones in the series, I was as surprised as the reader when the case was solved. I hope this means I didn’t “telegraph” the answer to the readers….

As I said before, by the way, this is the fourth book in the series, and there will ONLY be one more. Period.

In the first book, we meet Ian McBriar, a Seminary student who becomes a police officer after a drunk driver kills his mother. In this book, we learn he is about to go back to his small home town for a service commemorating the tenth anniversary of her death.
In the last book, we find out why she really died.

I once read The Deep by Mickey Spillane. The fact that he could make the entire book line up on the very last word of the very last page stunned me. It still does.

I read a lot of science fiction growing up. The science part is fun, but the way that people interact with it is what makes it worth reading.

In the same way that these writers put you on an alien planet and made it feel familiar, I have tried to introduce my characters and make you feel like you really know them. 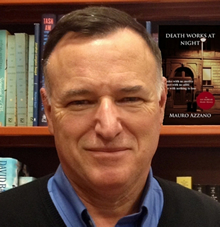 Mauro Azzano was born in Italy, North of Venice. He grew up in Italy, Australia, and finally Canada, settling on the West Coast outside Vancouver, British Columbia. He has a broad range of experiences to call on as a writer, having worked as a college instructor, commercial pilot, and a number of other unusual occupations.

Currently, he is writing the Ian McBriar Murder Mystery series and training as a distance runner. To learn more about Mauro, please visit his website.