The Thrill of the Real 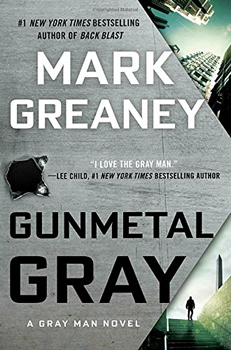 What’s more impressive as an author—writing thrillers with Tom Clancy or having your own best-selling series of action novels? Mark Greaney has done both.

Meanwhile, he is also the author of the hugely popular Gray Man series, featuring Court Gentry, a shadowy international assassin who kills for pay but still maintains a unique moral code.

“I enjoy both for different reasons,” Greaney said when asked which books he liked writing better. “Gray Man books are edgier, darker, and grittier. You get a little less of the geopolitical context of the story, but enough to give importance and context to the action. In a Clancy novel you are in the Oval Office, or the Kremlin.”

GUNMETAL GRAY is the first in the Gray Man series where the hero, Court Gentry, is actually on the inside of the intelligence community working as a contract agent for the CIA.

“He is in Asia, trying to help the U.S. locate a defector who holds the virtual keys to China’s cyber warfare program,” Greaney said. “The man is in the hands of Triads; the Chinese security services are after him, along with the Russians and several other malicious actors. Court must find the man and get him free of his pursuers, while living up to his own strong moral code, as questions about his own mission arise.”

He says the idea for Gentry and the Gray Man series came from a chance encounter at a bar in El Salvador.

“I saw an American guy who intrigued me. He was going out of his way to remain unnoticed, so I sat there and created a back story for him… former CIA, burned, on the run from the U.S. government and living off the grid in the Third World, surviving as a hit man, but only taking jobs he deemed righteous. I had a book idea before I left the bar. No idea who he was, but I owe him a drink.”

Greaney was 42 when he sold his first novel, but things happened very quickly after that. The Gray Man debuted in 2009 and became a national bestseller, which led to his writing collaboration with Clancy. “Tom and I had the same editor, Tom Colgan, at Penguin. Tom Clancy was looking for a co-author and Tom Colgan thought of me. He knew I was a massive Clancy fan and knew the storylines, characters, and feel of a Clancy book, so I got the chance to work with the master.”

For Greaney, it was a special thrill to write with Clancy because reading Patriot Games had inspired him to become a writer.

“Patriot Games was the first thriller I ever bought—I guess I was 19,” he said. “I was floored, and after that I bought everything by Clancy, Forsyth, LeCarre, DeMille, Peters, and others out there, and I couldn’t read fast enough. Every Christmas, Clancy had a new book out. My dad would give it to me, and they remained among my favorites, so it has been an incredible experience to work with Tom and to keep his characters going.”

Like Greaney’s other books, GUNMETAL GRAY deals with real-world issues, in this case involving China and computer technology.

“I’ve always been interested in both current events and history, and I think it gives a lot of realism to a story to stay as close to ‘real world’ in my fiction,” he said. “I do depart from fact when the fiction requires it, but often my fiction is just dramatizations of things I’ve read about and sewn together to make a fun story.”

He also does a lot of travel and research with military and law enforcement groups to make his thrillers as realistic as possible.

“Mostly it happens during the writing process. I’m off to France soon for research on the 2018 Gray Man book, then Germany and Poland for a different project. I’ll be taking another firearms course in a few weeks, too, just to brush up on some knowledge relevant to my books. For the location research, I usually have a list of places I want to see that I’ve mapped out from planning my book, but I always stumble onto other locations for new ideas.

“The firearms’ study has as much to do with the men and women I meet while training as it does with the training itself. I’ve made my best contacts at private shooting schools with those in military and law enforcement.”

So what does Greaney think his Gray Man hero Court Gentry would be like in real life—if one ever ran into him? 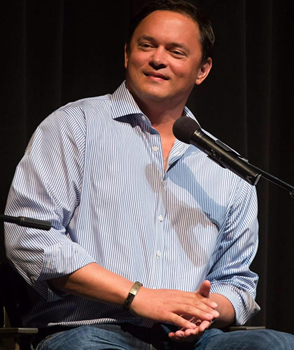 “He wouldn’t be very chatty, that’s for sure. He is driven and ruthless, but only when he feels he’s in the right. His moral compass doesn’t point true north, and as you see in GUNMETAL GRAY, his own belief system gets him into trouble because he is so steadfast in the face of adversity. He’s an uber-killer, but Court uses his wits more than his fists.”

Greaney worked in the medical device industry for a decade and held other jobs in the restaurant and computer software fields before becoming a full-time writer. What’s his daily routine like now? “I do most of my writing in the morning, and I usually start by six a.m. or so. Afternoons are for research and other business, and I’ll often read at night. When I am travelling for research or on a book tour, I try to get some writing in every day, and as deadlines get closer, I tend to work a lot harder.”

“Right now I’m working on Gray Man #7, the working title is Weaponized. I’ll be travelling and writing that one throughout the first half of 2017.”

Mark Greaney is the New York Times bestselling author of Back Blast, Dead Eye, Ballistic, On Target, The Gray Man, Tom Clancy: Full Force and Effect, and Tom Clancy: Support and Defend. With Tom Clancy he is the co-author of Locked On, Threat Vector, and Command Authority.