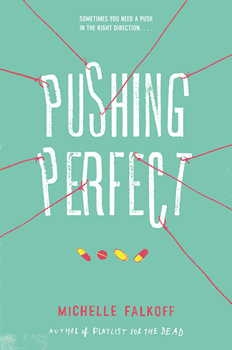 Author Michelle Falkoff isn’t afraid to go dark either, but with one important distinction—there must be a balance of humor, a sliver of light. In her debut, Playlist for the Dead, Falkoff wrote about teen suicide. For her new release, PUSHING PERFECT, Falkoff explores a young girl’s dangerous quest for perfection.

Both novels are rich with character, filled with emotion, authentically teen, and infused with a well-crafted lightness that provides much-needed relief from the dark.

“I have trouble with books (and TV, and movies) that are relentlessly dark, because I don’t think that’s what we’re like, how we handle tough situations,” she says. “It’s important to me to write stories that show kids getting through hard things. Maybe not unscathed, and maybe not in a happily-ever-after kind of way every time, but surviving and seeing the possibility of a future for themselves that’s brighter than where they are at the moment.”

At the start of PUSHING PERFECT, Falkoff’s teen protagonist is seemingly perfect—perfect grades, perfect friends, perfect life, perhaps at the pinnacle of “brightness.” But that perfection is an illusion, and with the all-important SATs on the horizon, Kara must find a way to keep her world from crumbling. The answer comes in the form of a new underground drug.

But leaning on this substance leaves Kara open for preadtors,, and she soon finds she is not the only one receiving threatening anonymous texts from a stranger, not the only one striving for perfection—and certainly not the only one in serious danger. In fact, the consequences of her actions could be deadly.

It’s not quite a ripped-from-the-headlines story, but PUSHING PERFECT is certainly inspired by Falkoff’s extensive research into issues facing today’s teens.

“I’d been reading a lot about the suicide epidemic in Palo Alto, about all these kids from upper-class families who were so driven to succeed in high school that some of them drove themselves over the edge,” Falkoff says. “I didn’t want to write about suicide again, though.”

Instead, Falkoff began to think about other ways a teenager might handle—or fail to handle—that kind of pressure. Zeroing in on the core theme of both books—the idea that everyone keeps secrets from each other—she imagined how difficult it would be for Kara to be alone in her feelings, to have to keep her emotions locked inside.

“Kara reminds me in some ways of myself as a teenager, and in other ways she reminds me of other people I knew, people whose families were really hard on them in ways that I’m sure they thought were helpful but that could be really destructive,” she says. “Kara tried with her parents, who had good intentions but who weren’t really listening properly; I wish she’d been able to try harder, so she could avoid getting into trouble. She didn’t try with her old friends, who she learns later would have understood, and that also led her down a path she didn’t need to be on.

“So if there’s one thing to take away from PUSHING PERFECT, I think it’s about being willing to trust people—even though sometimes that can still get you into trouble.”

Falkoff’s tentative next project is centered around a boy who thought his mother was dead and instead finds out that she’d actually kidnapped him as a baby and has been gone ever since. Look for an announcement on that soon! 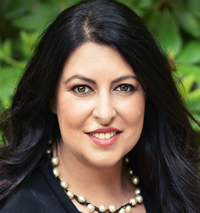 Michelle Falkoff is a graduate of the Iowa Writers’ Workshop and lives in Chicago. Her previous novel, Playllist for the Dead, was selected as one of NPR’s Great Reads in 2015.

To  learn more about Michelle, please visit her website.