Between The Lines, Features, Latest Books
October 31, 2016
by Alison McMahan
0 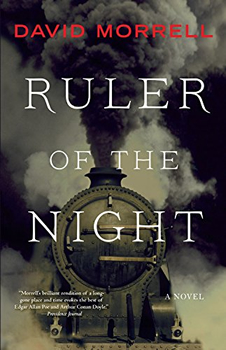 “What we are doing is writing the fictional autobiography of our souls.”

That’s how David Morrell, a bestseller for more than 40 years, characterizes his work. His latest novel, the historical thriller RULER OF THE NIGHT, was praised as a “crackling yarn” by Kirkus and “spectacular” by Publishers Weekly.

Morrell, the self-described “mild mannered professor with bloody-minded expressions,” burst on the scene in 1972 with the novel First Blood, considered the ur-text of the modern thriller.

With First Blood, Morrell aimed to write action without “relying on pulp expressions that had been recycled and recycled and recycled, like ‘a shot rang out’ or ‘gun smoke filled the air.’ ” For inspiration, he looked to Hemingway’s For Whom the Bell Tolls and Farewell to Arms, even To Have and Have Not, which, Morrell says, “still has some degree of pulp. Hemingway found ways to write action using expressions and language that hadn’t been used before. I wanted to write [the action in] First Blood in a way that no one had before, even if I had to invent the vocabulary.”

Morrell won’t do a scene if he has read or watched anything like it. But he also likes to build on what other writers have done. He was inspired by Donald Westlake’s (writing as Richard Stark) chase scene through the playground in Slayground (1971). “Stark takes the reader on this fantastic chase through amusement park rides. Then [Parker] gets into a high-rise hotel under construction. Now the chase, which was horizontal, becomes vertical, going up through the unfinished building.

Morrell was also influenced by Joseph Campbell’s Hero With a Thousand Faces. “A well-structured story mirrors the structure of our subconscious. A cave is a metaphor for the mind. Fire is a metaphor for passion, for powerful emotion. We use those kinds of stories to understand the way we behave.” Campbell mentions certain settings as being particularly powerful: bridges, caves, fires, floods, forests, mazes, and rivers, among others. “Stories with those settings are nearly impossible to screw up. When stories work, it’s usually because the material has been arranged in a certain fashion. Storytelling is all about structure, and then tone.”

First Blood was the first of various Morrell novels that featured a difficult relationship between a young man of action and his mentor/father figure. Those archetypal characters appear again in other books, such as the The Brotherhood of the Rose series, where spymeister Elliot trains numerous orphans to be absolute killers and absolutely loyal to him.

Morrell’s father died in combat before he was born. His mother was forced to put him in an orphanage, then took him back when she remarried. “But the guy she married didn’t like children. They would have these horrible fights.” The young Morrell would be so frightened that he slept under his own bed. “If you go through [my books] up until my son died, you will see that the search for the father is a big deal in my novels. After my son died [at the age of fifteen from a rare cancer] it was almost the reverse.” Those novels were about “older people looking for a substitute son.”

His son’s death was compounded just a few years later by the death of his granddaughter, also from cancer. His double grief made him want to disappear from the modern world. For the last seven years he has “lived” in 1850s London with Thomas de Quincy and his daughter Emily, the main characters of the trilogy that ends with this month’s publication of RULER OF THE NIGHT.

“It was like coming up from a bathysphere,” Morrell says of completing the trilogy, which began with Murder as a Fine Art and continued with Inspector of the Dead (there’s also a short story entitled “The Opium Eater“).

“I tricked myself into thinking I was really living there. Everything I read during that time, fiction or non-fiction, was related to that era.”

Thomas de Quincey was in Scotland, not London, during the time the trilogy is set. Nor is there any evidence he ever helped Scotland Yard solve crimes. “Apart from that, every reference to De Quincey’s past, his backstory, or about Emily, is all accurate.”

De Quincey is a fantastic character. He rented out multiple houses (up to seven at one point), filled them with books (often collector’s editions), then had to flee his creditors and would start all over again at a new house. His daughter Emily would sneak his manuscripts to his publishers and return with his payment. One of his landlords kept him prisoner for a year, forcing him to write as fast as possible, an arrangement that was to continue until his debts were paid off. De Quincy finally managed to escape by consuming so many laxatives that he had to monopolize the privy shared by two households. Finally the other householders forced his landlord to throw him out.

“For all his amusing eccentricities, De Quincey was a drug addict. Normally that would make the reader uncomfortable, so I knew he needed a buffer.” His daughter Emily was 21 at the time the trilogies take place, so Morrell had to introduce her as well as her father. “I have a morbid fear of repeating myself, so to make sure the three books weren’t just clones of one another I modified the point of view. The first novel, Murder As a Fine Art, imitates the point-of-view techniques of the 19th century novel, using the third person omniscient and Emily’s first-person intrusions in her diary excerpts. 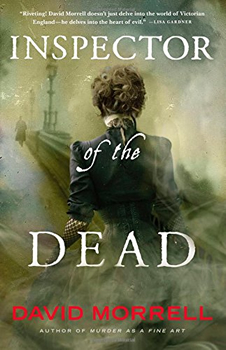 “I decided to introduce De Quincey through Emily’s first-person viewpoint. She’s funny, irreverent, and wonderful. We love her, so we will accept her love for her father.” In fact, Emily became the lynchpin for all three books.

The second novel, Inspector of the Dead, is a hybrid, using omniscient in certain sections, but begins to rely more and more on third person limited. And the third novel, though set in the Victorian era, uses modern point-of-view techniques. “The railroads, the increased speed of their technology made everything faster, so the story is faster too.”

Morrell didn’t realize he was writing a trilogy until his friend Barbara Peters, the owner of the Poisoned Pen bookstore, read Murder As a Fine Art and told him so. “As soon as she said it, I knew she was right. There was so much to be said about De Quincey’s descent into his illness and Emily’s relationship to him.”

It was also Barbara Peters who pointed out that the De Quincy trilogy represented a shift in the “fictional autobiography of his soul.”

“Barbara said, ‘You realize you brought in a fantasy version of your granddaughter.’ That brought me a new psychological awareness of what I was doing. I was 69 when I wrote that book. De Quincey was the 69-year-old father of a 21-year-old woman. The emotion is more like grandfather, granddaughter.”

The new psychological awareness enriched the third book. There is a scene in a hydropathy clinic, where the doctor suggests a water treatment for De Quincey that he promises will cure him of his addiction. The treatment involves swaddling De Quincey in wet sheets. But as soon as De Quincey is immobilized, the plot requires he get out of the wrapping or he will be killed. Emily tries to unswaddle him as fast as she can. “Oh, did I laugh when I was writing that scene. He’s thanking her, and she’s trying to avoid the fact that she’s given up her youth to take care of him.” (In real life, Emily lived to 1916, but never married, because she didn’t believe in it). 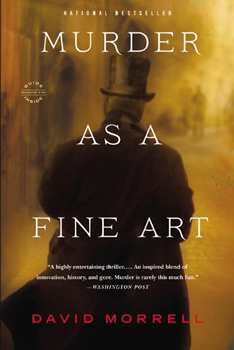 The title refers to something Emerson said about De Quincey: “The Opium Eater is the ruler of the night.” It’s a reference to De Quincey’s discovery of the subconscious aspects of the human mind, 50 years before Freud. In each book, Morrell delves deeper into how De Quincey’s opium-altered mind worked, but for the third one his editors encouraged him to go even further, to “make it more luminous.” The result is a nightmarish vision as De Quincey, Emily, and two detectives from Scotland Yard try to get out of a fire alive. “I had to find ways to expand the weirdness.”

As usual with Morrell, the action sequence that ensues leaves us breathless, but this time also asking along with De Quincey: Does reality exist outside ourselves or do we create it in our imaginations?

Thomas De Quincey’s blood-soaked essays inspired Edgar Allan Poe, who in turn inspired Sir Arthur Conan Doyle to create the detective (and opium addict) Sherlock Holmes. Morrell nods to these forbears even as he takes us back to the source: De Quincey himself, using his own words to describe “murder as a fine art.” A character who teaches us about the duplicity of reality even as he battles, bends to, and flows with the luminous visions of his opium dreams.