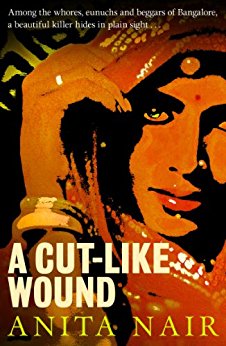 As a reader, it’s always interesting to me when an author veers off in a new direction and writes something outside of his or her comfort zone.  Is this the book, perhaps, that the author always wanted to write?  Or was meant to write?  It becomes even more interesting when the author has gained international acclaim for her prior work.

Such is the case with Anita Nair: a prize winning, internationally acclaimed novelist, playwright, essayist, lecturer, and literary personality from Bangalore, India. Her novel Ladies Coupe, published in the United States by St. Martin’s Griffin, is a feminist classic which has been published in thirty languages around the world.  Her novel IDRIS: KEEPER OF THE LIGHT was short-listed for The Hindu Literary Prize; the screenplay for the movie adaptation of her novel Lessons in Forgetting won the Indian National Film Award for 2012; and Anita was awarded the Central Sahitya Akademi award for her contribution to Children’s Literature in 2013.

Anita has never shied away from the underbelly of life, and now she has focused her considerable talents on a noir crime series set in Bangalore and featuring Inspector Borei Gowda.  The second novel in the series, CHAIN OF CUSTODY, just came out, and in preparation I interviewed Anita about her career and the lead title in the series, A Cut-Like Wound.  From this reader’s viewpoint, Anita didn’t miss a step in her transition to writing crime novels. A Cut-Like Wound is a very layered read that involves a nail-biting search for a serial killer stalking the heat-soaked streets of Bangalore during Ramadan.

Thanks for taking the time to chat, Anita.  I loved A CUT-LIKE WOUND and I’m eager to ask a few questions about the novel.  But first, why don’t you tell us a bit about where you’re from and how you got started as a writer?

I come from a small village called Mundakotukkurussi in Kerala, and I started out as a secretive writer. That was probably because my family was full of painters and musicians, but no writers. So when I wrote my first poem at the age of seven and my brother and mother didn’t quite believe that it was in fact an original piece, I decided to clam up. I was always a voracious reader as a child and the gods I worshipped were all authors. So it was almost organic that I would want to write the kind of stories I enjoyed reading.

What is the writing scene like in Bangalore?  Do you have a close-knit group of writer friends?

There isn’t a writing community in Bangalore. While Bangalore is home to many writers, several of them are islands unto themselves. I am aware that there are writers who hang out together but I tend to be reclusive and don’t socialize.

Which writers do you consider as your influences?

Jorge Amado, Paul Auster, John Updike, and Annie Proulx, among several others. In fact, in some way or the other, every book that I have read has made an impact on me. 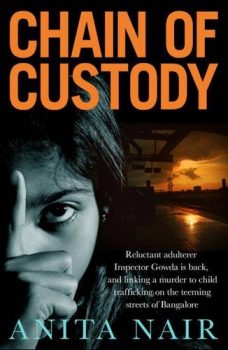 From what I gather, the crime genre is a real departure for you.  Can you describe your body of work as a collective, and talk about how you came to write a dark crime novel?

I have mostly written literary fiction. However my body of work has always dealt with the human condition and hence I don’t see the crime genre as a total departure from what I have written before. The reason being with crime I discovered that it was a tremendous vehicle for social commentary.

Was it difficult or liberating to step outside of your comfort zone?  Do you believe novelists should follow their muse and write what’s in their heart?

It was both difficult and liberating to step outside of my familiar work of character-centric narratives and focus on the theme and plot. Pace is essential in a crime novel and I had to ensure that the thrilling point didn’t flag. It was both challenging and fun. And yes, I do believe that writers must follow their muse and write what their heart tells them rather than buckle to publishing trends and sales pressure.

I’m always curious about the publishing industry in other countries.  Are crime novels taken seriously in India?  How well do they sell?

Crime fiction is still in its preliminary stages in India. Once the run-of-the- mill novels that churn out the same formula stop and more authentic plots come about, Indian crime fiction is bound to go global.

A Cut-Like Wound is a fascinating book.  You’re a master at setting and characterization, and you really have a knack for exploring the underbelly of society (only a cop or a crime novelist would take that as a compliment).   What part(s) of writing a mystery novel did you find came easiest?  What were the most challenging?

The easiest part of writing a crime novel for me was creating the characters and the settings. In many ways it was a skill I honed over the many literary novels that I had written. The most challenging part though was the research involved, especially as the Inspector Gowda novels are police procedurals. It is extremely difficult to access information on how the police department functions, which is vastly different from what is available in textbooks and what is taught at the police academies. Secondly, the other big challenge was to ensure that I didn’t miss a step when it came to timelines and cross checking facts and ensuring the smallest of details wasn’t overlooked.

Inspector Gowda is a wonderfully jaded character.  How did you come up with him?

I suppose you could say that Gowda is my male alter ego. And so, many things I would like to do, I do it vicariously through Borei Gowda. Naturally, a female detective wouldn’t serve the purpose. So, no, Inspector Gowda is not based on any real policeman. I wish though… I might have run away with him. My real-life experiences with policemen have been very limited. I have met and interacted with several senior police officers and policemen from the ranks as well. Most of them impressed me immensely and in all honesty, a few of them made me want to laugh at their pomposity and a few others I wanted to kick for their churlishness. When I was building Inspector Gowda’s psyche, I knew for certain that all cops didn’t have to be the boorish creatures they are made out to be. Some of them are wonderful human beings and work tirelessly to make things right, and I was certain Gowda would be one of them.

From Inspector Gowda to the anonymous transgender killer, there was a thread running through the novel of characters whose inner identity is quite different from the face they present to the world (or from how they feel the world perceives them). Was that a conscious theme?

Yes, as a people Indians are constantly tussling between who they truly are and the façade they present. In fact, the façade is always one of what the world expects us to be. This is a subject that has always interested me and I suppose it was inevitable that I would choose this theme for my first foray into crime writing.

The second Inspector Gowda novel is about to be released – will he be a recurring character?

Yes, I want to explore more sides to Gowda. He is a complex character and I think there is much he can offer.

The Man Who Wasn’t There by Anil Ananthaswamy, The Blazing World by Siri Hustvedt, and Seasonal Suicide Notes by Roger Lewis

I think I’m always writing. But I do love to travel and grab the occasional movie or swim. And I study Indian classical music so that is a very serious passion that takes a great deal of my time.

Write, don’t talk about it. And write honestly. 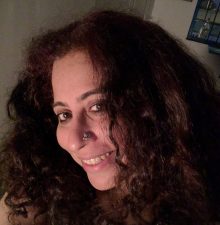 Anita Nair is the internationally acclaimed author of the novels The Better Man, Ladies Coupe, Mistress, Lessons in Forgetting and Cut Like Wound. Her new novel Idris : Keeper of the Light was short-listed for The Hindu Literary Prize.

She has also published a collection of poems titled Malabar Mind and a collection of essays titled Goodnight & God Bless, and has written two plays and the screenplay for the movie adaptation of her novel Lessons in Forgetting which won the Indian National Film Award for 2012. She was awarded the Central Sahitya Akademi award for her contribution to Children’s Literature in 2013.

Her books have been translated into 30 languages. Her new novella L’Alfabeto Delle Spezie has just been published in Italy. She also runs a Creative Writing Mentorship program in Bangalore called Anita’s Attic.