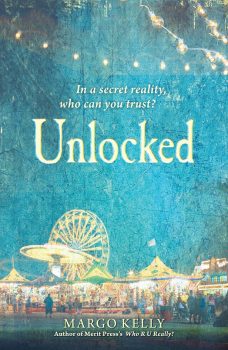 Margo Kelly made a striking impression on the young adult thriller scene with her 2014 debut Who R U Really?, about a teenage girl who becomes dangerously involved with an online stalker. Inspired by Kelly’s family’s own harrowing experience with an Internet predator, the book earned praise from reviewers and readers alike for its sobering take on a very real problem.

At first glance, UNLOCKED might seem like a tamer beast. Kelly’s second published novel, out October 1 from Merit Press, is steeped in supernatural horror and gothic suspense tropes—a far cry from the ripped-from-the-headlines realism of her debut. The plot centers on Hannah, a seventeen-year-old girl who experiences bizarre visions after undergoing hypnosis at a state fair. But when the story takes a surprisingly grim and all-too-relatable turn, readers are once again in Kelly’s familiar purview: a dark, paranoid tale of a teenager girl who must navigate the terrifying fallout of a seemingly inconsequential action.

Kelly sat down with The Big Thrill to talk about crafting psychological suspense for young readers, offer pointers on juggling a large cast of supporting characters, and share her thoughts on the legacy of YA suspense queen Lois Duncan.

I understand your first novel, Who R U Really?, was inspired by your family’s own disturbing experience with an online stalker. Do you have any sort of personal connection with UNLOCKED?

When I was in college I attended my first hypnotism show.

In an auditorium along with a couple hundred other students, I watched as fifteen guys and girls went on stage and participated in the show. The audience laughed and clapped and hooted when the hypnotized students did ridiculous things such as quack like ducks or sing like rock stars. It was great. Terrific. Until the end.

While the participants were still completely hypnotized, the hypnotist turned to the audience and spouted his political views. He didn’t even try to hide what he was doing. He spoke clearly and abruptly. The people to my left and to my right sat in shock. My own mouth dropped open in disbelief. The hypnotist went so far as to tell everyone exactly how to vote in the upcoming election. I was dumbfounded. I felt like my trust had been violated, and I wasn’t even on the stage. I was not hypnotized. I was not in any sort of suggestive state. But those students in the show still were. And I bet there were plenty of others sitting in the audience who were impressionable from watching the hypnosis being performed.

That’s the exact moment when I decided I would never willingly take part in hypnosis. Sure, that was an isolated incident. Some hypnotists are trustworthy. But not all. Some do not have a very high ethical code. And because of that, to this day, I hate giving up control to anyone, under any circumstances.

I’ve never forgotten that college night, and it inspired UNLOCKED.

UNLOCKED was pitched as being in the vein of Lois Duncan, who was a tremendously important figure in YA suspense fiction. In what ways do you think Duncan’s work influenced you as a writer?

Lois Duncan’s writing is often compared to that of Dean Koontz and Stephen King. While Koontz and King write for the adult audience, Duncan wrote for teens. I want to be like Lois Duncan! She was a prolific writer, and her novels still impact the book world. She has influenced my writing primarily by paving the way. She is an inspiration for overcoming trauma in her personal life and refusing to back down on important issues. Lois Duncan’s influence motivates me to strive to be a better writer.

Suspense fiction often relies on intricate plotting and well-paced reveals. I’d love to know a little about your writing process – do you do a lot of outlining, or do just see where the story takes you?

Writing the first draft of UNLOCKED is what converted me from a “pantser” (just see where the story takes me) to a “plotter” (detailing major plot points in an outline). I was having a blast writing that first draft of UNLOCKED until I wrote myself into a corner. I stopped and brainstormed for days, wondering where I’d gone wrong with the plot. Once I figured it out, I had to delete 10,000 words. TEN THOUSAND words. Deleted.

That turning point in the story happened when [Hannah’s friend] Plug and Hannah stopped to watch the firemen at [Hannah’s boyfriend] Manny’s house. In the original draft, Hannah was arrested right there. In the final draft, she’s not. And that one change altered the entire outcome of the story. I will always be an outliner from now on. One of my favorite quotes from the story comes from that very scene in the book. Hannah said to Plug in the story: “We just fled the scene of a crime. … What does that make us?” Plug replied, “Determined.” Really, it was me, the author, feeling very determined in that moment to make the story work.

The book makes effective use of the unreliable narrator device. Why do you think these characters have become such an import part of today’s literary landscape?

I had written UNLOCKED before I ever read Gone Girl by Gillian Flynn, but Flynn’s book blew apart the book world with her unreliable narrator. Sure there were other books before Gone Girl, but Flynn’s storytelling knocked readers for a loop. Now, these types of characters have become a staple in the industry. It’s because readers like to be surprised. Readers want the story to take unexpected turns. An unreliable narrator keeps the reader alert, looking for extra clues to figure out what’s going to happen next.

UNLOCKED explores a lot of territory as Hannah tries to get to the bottom of whatever’s happening to her; plot elements include hypnotism, occultism, and even the specters of schizophrenia and suicide. What kind of research did you do to flesh out those themes?

Oh, I did a LOT of research. I consulted medical journals, college textbooks, pharmaceutical handbooks, how-to videos on hypnosis, religious writings, and occult books. Since then, I’ve even given guest lectures about the dangers of hypnosis and the reality of demons. So much information is out there on these topics. It’s quite fascinating.

You juggle a lot of characters in UNLOCKED, yet I had no trouble keeping up with everyone. Do you have any advice for writers on managing a large cast?

Secondary characters must earn their spot in the manuscript; otherwise they’re taking up unnecessary space, and most likely, they’re forgettable. I use the following fifteen questions to help me determine if every single character is necessary in a story. It’s a lot of extra work, but it’s worth it in the end:

By utilizing these questions, secondary characters will have more depth and importance in the story. 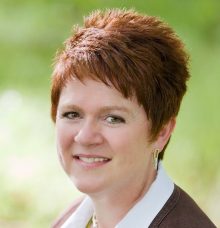 Margo Kelly is a native of the Northwest and currently resides in Idaho. A veteran public speaker, Margo is now actively pursuing her love of writing. Her critically acclaimed debut, Who R U Really?, was published by Merit Press (an imprint of F+W Media) in 2014. Her second novel, Unlocked, will be published by Merit Press in October 2016. Margo welcomes opportunities to speak to youth groups, library groups, and book clubs.

To learn more about Margo, please visit her website.