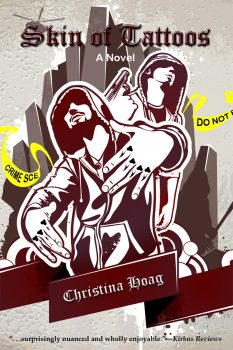 New this month is author Christina Hoag’s SKIN OF TATTOOS, a harrowing thriller set in the world of inner-city gangs.

Los Angles homeboy Magdaleno is paroled from prison after serving time on a gun possession frame-up by a rival, Rico, who takes over as gang shotcaller in Mags’s absence. Mags promises himself and his Salvadoran immigrant family a fresh start, but he can’t find either the decent job or the respect he craves from his parents and his firefighter brother, who look at him as a disappointment. Moreover, Rico, under pressure to earn money to free the Cyco Lokos’ jailed top leader and eager to exert his authority over his rival-turned-underling, isn’t about to let Mags get out of his reach. Ultimately, Mags’s desire for revenge and respect pushes him to make a decision that ensnares him in a world seeded with deceit and betrayal, where the only escape from rules that carry a heavy price for transgression is sacrifice.

The Big Thrill checked in with Hoag to learn more about this story and her thoughts on the craft of suspense.

What first inspired you to write a thriller set in the gang underworld of Los Angeles?

The genesis for SKIN OF TATTOOS came from interviews I did for a magazine story in El Salvador on gang members deported from Los Angeles to San Salvador, which most of them really didn’t know because their families had emigrated when they were infants. It was a classic “fish out of water” story. They neither belonged in El Salvador nor in the United States. Their story stayed with me because I moved around the world as a child so I know the feeling of not really belonging anywhere. The novel grew out of that, plus my general interest in gangs as a subculture within our larger society. I also co-wrote a nonfiction book on gang intervention called Peace in the Hood: Working with Gang Members to End the Violence.

Tell us about your character, Magdaleno Argueta.  What has his journey been like up to this point?

When we meet Mags, he’s pretty hopeful about his future. After doing time, he wants to put his gang days behind him. He’s smart and he desperately wants something more out of life. But circumstances stack up against him: a criminal record, a lack of work experience and job skills, an unsupportive family. He becomes disillusioned. On top of that, he can’t escape the gang because not only are his homeboys around physically, but they’re his best friends. He misses them, he misses being somebody. The final nail is that his nemesis, Rico, has taken over as shotcaller, or gang leader. Mags, who had seen himself as shotcaller, falls victim to his pride. He wants revenge. And revenge doesn’t lead to good places.

I think suspense has a lot to do with the pacing of what to reveal and when. I’ve found it almost impossible to plot out reveals in detail. It seems to happen on the page, which necessitates a lot of going back and tweaking so that dialogue and occurrences match up with later events. Emotion also has a lot to do creating good suspense. You want to get inside your character’s head so the reader is along for the ride.

I’m a morning writer, that’s really when my best stuff comes out. I try to gear my days around that but I’ve had to develop the wherewithal to write at other times of the day if circumstances prevent me from writing in the morning. I’ve found afternoons or evenings are good for revising what I wrote the previous day or mapping out the next couple scenes. That can help push forward a project and save my precious morning time for actual writing. I also don’t like to write myself out in a session. I leave something for the next day so I can pick up where I left off without spending a lot of time thinking about what I’m going to write that day. Once I learned that, that was a real productivity booster.

I’ve got two novels I absolutely, positively must finish! One is called The Revolutionaries, and it’s a literary political thriller based on the 2002 coup attempt in Venezuela, where I was living at the time and which I covered as a journalist. The protagonists are an expat married couple who find themselves on opposite sides of Venezuela’s very divided politics. The other is called Angels Lust. It’s a detective mystery set in Los Angeles with a Latin American twist. I also have a sequel to SKIN OF TATTOOS. A chunk of it is written, but it’s still got a long way to go. Mags’s journey is far from over. He’s got some deep, dark places to before he resurfaces. 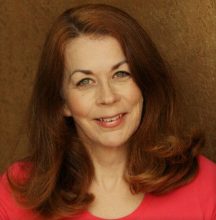 Christina Hoag is the author of Skin of Tattoos, a literary thriller set in L.A.’s gang underworld forthcoming from Martin Brown Publishers, and Girl on the Brink, a romantic thriller for young adults forthcoming from Fire and Ice YA/Melange Books. She is a former reporter for the Associated Press and Miami Herald and worked as a correspondent in Latin America writing for major media outlets including Time, Business Week, Financial Times, the Houston Chronicle and The New York Times. She is the co-author of Peace in the Hood: Working with Gang Members to End the Violence, a groundbreaking book on gang intervention (Turner Publishing, 2014). She resides in Los Angeles.

To learn more about Christina, please visit her website.