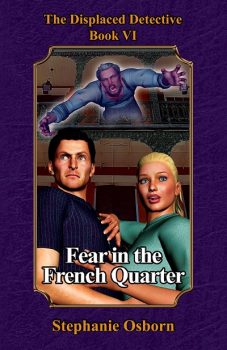 For years, Stephanie Osborn wanted to write a ghost story along the lines of The Hound of the Baskervilles. In her mind, the ideal setting was a haunted castle somewhere in Europe. Then came a trip to New Orleans.

“I suddenly realized ‘the most haunted city in the USA’ was right in front of me. Why did I need to set the ghost story in a European castle?”

FEAR IN THE FRENCH QUARTER is the sixth adventure in Osborn’s Displaced Detective series. The series begins with Dr. Skye Chadwick observing alternate realities often populated by those we consider only literary characters. One of her favorites to view was continuum 114 where a certain Victorian detective was to have died along with his arch-nemesis. Reflexively Skye intervenes, rescuing her hero who inadvertently flies through the wormhole that connects his universe to ours.

Osborn has this to say about FEAR IN THE FRENCH QUARTER: It’s a fun romp through New Orleans with Sherlock Holmes as all hell is about to break loose—exponentially increasing paranormal activity, strange interactions with said paranormal events, and an impending cosmological disaster, all complicated by an approaching Category 4 hurricane! And realize—this is not your father’s Sherlock Holmes!

When asked how much of the novel she had before starting to write, Osborn replied, “Okay prepare to laugh—the night our friends took my husband and me on a whirlwind tour of the Quarter about three years ago, we were walking down Pirates’ Alley hard by the cathedral…when I suddenly “became aware” that the Holmeses were also walking along the Alley in their universe, and having a bit of an adventure with a would-be fortune teller. As we progressed down to Bourbon Street and thence to our restaurant for dinner, so did they…and I was “aware” of their experience along the way!

“The next day, I pulled out some note paper and a pen and started scribbling down what I’d “seen” as we walked. That’s all I had at that point—just the realization that they were visiting New Orleans. A quick discussion with some fellow writers, and I had the book’s title—FEAR IN THE FRENCH QUARTER.

“I knew I was going to take that modern haunting idea and transfer it to America, to New Orleans…that was it—the book had shape.

“I realized there was still a lot I didn’t know about New Orleans—a lot of the culture, the various blends of cultures, the history of the place, the hauntings, the Cajun dialect, and more.” After doing as much as she could from home, Osborn went back to New Orleans for CONtraflow. The conference’ guest liaison, who happened to be a tour guide in her day job, was most helpful. “I have so many notes from that weekend! It was a delight.”

Science plays a large role in Osborn’s series and FEAR IN THE FRENCH QUARTER. “The basis for everything is rooted in cutting-edge physics and astrophysics. Throughout the series I have used cosmic string theory, superstring theory and M theory, plus things such as physical chemistry and materials science. I have degrees in several sciences but I also have a beta reader who is a Ph.D in particle physicist and he brainstorms with me.

I probably spend at least as much time researching my novels as I do writing them.”Osborn said, “I really like the idea of dumping a Victorian genius into the modern world and seeing what he does with it. I wanted to dump Holmes into it and see how far I could push him without breaking him. In FEAR IN THE FRENCH QUARTER we get to see how far Holmes has come in that year and a half he’s been a 21st Century man. Plus I kind of took the whole haunting thing and turned it on its ear in a fashion that, scientifically, makes sense.”

New Orleans gets high marks too. One of the things early readers have said about FEAR IN THE FRENCH QUARTER is that Osborn captured the city’s essence. To her, “the very city itself became a character in this book. I got to know a lovely city much better in the process.”

Other things she knows much better are the principal and recurring characters in the Displaced Detective series. “Somewhere along the way, they’ve become real people to me. And I love seeing what trouble I can get them into and how they’re going to get out of it.”

So what comes next after FEAR IN THE FRENCH QUARTER? Book 7, called A Little Matter of Earthquakes and set in the Pacific Northwest, is started. Book 8, back in Colorado and called The Adventure of Shining Mountain Lodge, is written, and Book 9 is tentatively called A Bundle of Swords. There’s Project Tesseract: The Holmes Files, an anthology of tales about the other versions of Holmes in different universes. She is also working on a couple more Gentleman Aegis novels, and is trying to wind up the story arc for the military science fiction, Cresperian Saga, which is another shared universe series among several authors.

So, to what does Osborn attribute her productivity? “Hon, if I knew that, I’d bottle it and sell it! I think I have a slight advantage in that I have also been called a polymath, so I have a lot of background material to draw on and am not afraid of mixing one from column A, one from column B, and one from column C. In all seriousness, I do think that my background and my broad education, coupled with a tendency to go through life exploring and trying out new things, has led me to a place where I can come up with all these ideas, then chase ‘em to their logical conclusion, and write it all down in an interesting fashion.” 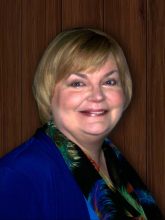 Stephanie Osborn, the Interstellar Woman of Mystery, is a veteran of more than 20 years in civilian/military space programs, with graduate and undergraduate degrees in four sciences: astronomy, physics, chemistry and mathematics, and she is “fluent” in several more, including geology and anatomy. She has authored, co-authored, or contributed to some 30 books, including the celebrated science-fiction mystery, Burnout: The mystery of Space Shuttle STS-281. She is the co-author of the Cresperian Saga book series, and currently writes the critically acclaimed Displaced Detective Series, described as “Sherlock Holmes meets The X-Files,” and the exciting Sherlock Holmes: Gentleman Aegis series. In addition to her writing, the Interstellar Woman of Mystery now happily “pays it forward,” teaching math and science through numerous media including radio, podcasting and public speaking, as well as working with SIGMA, the science-fiction think tank.