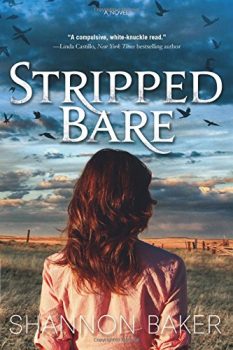 Readers familiar with Nora Abbott from Shannon Baker’s popular Nora Abbott mystery series will be delighted with the new heroine Baker introduces in STRIPPED BARE—Kate Fox.. Gutsy and smart, Kate loves her life in Frog Creek, a cattle ranch in the stunning Nebraska Sandhills, her own bit of paradise. But when Kate’s sheriff husband is shot, another family member murdered, and Kate’s niece goes missing, suddenly things are not so heavenly—and it’s up to Kate to find a killer.

Described as a contemporary western in which Longmire meets The Good Wife, STRIPPED BARE is a fast-paced, suspenseful ride through Nebraska’s cowboy country.  A long-time resident of the Nebraska Sandhills, Baker is no stranger to the West.  And she moves around.   She’s now firmly rooted in Tucson, Arizona, after time spent in other Western cities. Baker’s love and respect for the West’s rugged landscapes come through in her novels.

She recently took some time from her busy schedule to sit down with The Big Thrill.

Congratulations on the upcoming release of your new book, STRIPPED BARE, the first in the Kate Fox mystery series.  Please tell us something about the book that is not on the back cover.

Thanks Wendy and ITW. The Nebraska Sandhills, where STRIPPED BARE is set, is a unique place. It’s home to four of the ten least-populated counties in the country, and where cattle outnumber people by more than fifty to one. More than most places, the people in the Sandhills live life on their own terms, which creates lots of opportunities for humor, quirkiness, and danger.  Even though everyone knows everyone, with so much space, there’s room for lots of secrets. And there are so very many places to hide bodies.

STRIPPED BARE features Kate Fox, a woman as tough as the environment in which she lives. In fact, Kirkus Reviews said about STRIPPED BARE, “Baker serves up a ballsy heroine, a colorful backdrop, and a surprising ending.” Please share with us a little about Kate.  What events from Kate’s past helped make her the woman she is today?

I love that Kirkus calls Kate ballsy! Kate is smack in the middle of nine kids, raised—or not—by a bipolar artist mother and a father gone for days at a time on the railroad. She’s learned to take care of herself, and often her brothers and sisters. Being the ultimate middle child, she’s also used to a certain invisibility, and likes it that way.

I love hanging out with Kate. She’s smart and sensible and definitely not a whiner. She is loyal and devoted to her family and skirts drama whenever possible. Not a crusader, she won’t back down if someone is in trouble. She’s a total western hero, but also a woman searching for a happy life.

The setting of STRIPPED BARE is a breathtaking but unforgiving landscape. Similarly, novels in your popular Nora Abbott mystery series take place in various stunning, rugged locales in the West and Southwest. How does setting figure into your stories? Are you drawing upon your own life experiences?

I’m a sandwich generation. My parents’ idea of outdoors was a yearly BBQ in our backyard on Mother’s Day. My children would much rather have spent an afternoon TV binging than hiking (maybe because I tended to promise them an easy walk and ended up on mountain climbs).  I left the Sandhills over a decade ago, and feel lucky to have lived in Flagstaff, Boulder, and now Tucson.  The Grand Canyon, the Rocky Mountains, Sonoran Desert—wow, I do love the west and the big skies where you can watch a storm build and creep up, the unexpected wildlife siting, the solitude. It’s hard to keep me inside for long so it’s only natural that landscapes are characters in my books.

Get out of my head! Lots of writers begin a book with characters. For me, it’s usually about a situation. Once I know what I want to write about, I find the who. I plot and write and when it’s all done, I usually see the theme. More often than not, it deals with my protagonist (in my case, a woman) coming into her own.  Most of my books are character-driven, although I strive for action and twists and a good mystery to solve.  But why people do what they do fascinates me more than what they do.

My husband is my first reader and I value his opinion. He’s a guy, and doesn’t like to read too many—what he calls—kitchen scenes. Those are scenes where characters drink coffee and have “relationships.” So he keeps me moving the story along.

You have an interesting and varied background, including an MBA and work with an environmental trust, but now you write full-time. Can you tell us about your journey to publication?

My road to publication was like global circumnavigation. I’m a lesson in tenacity. Raising kids, isolated on the Sandhills, a million or so years ago, I started writing. I got a job afternoons at the Treasurer’s office and she didn’t want me to do anything but help citizens. That gave me hours of downtime when I needed to look busy. Because I wasn’t allowed to read, I ended up writing stories—on a typewriter. As the years progressed, I learned more, attended conferences, kept writing, kept reading, kept learning. I took a couple of breaks for life crises, but always returned. I mostly got up at 4:30 and wrote before going to work.

My first book was published by a nano-press in Texas in 2010. Then I sold the Nora Abbott series to Midnight Ink in 2013. Only after that was I able to acquire an agent, and she, bless her heart, sold the Kate Fox Series to Forge.  I know the rare unicorn who wrote and sold their first book to a Big Five publisher, but I’m not one of those.

When I worked full-time and had kids at home, I had very little time to write, so I taught myself how to get in and get out quickly. Which means I write a first draft without stopping, editing, or looking back. Every day. It used to be 1000 words before the sun came up. Now I at least double the daily word count and sit down after coffee, hot tub, dog walk, and email. I love this stay-at-home gig.

I’m not picky about where I write. Inside, outside, standing, sitting, coffee shop. Laptops make my life a whole lot easier. Facebook complicates my writing life, though. There are always animal videos and clickbait that can draw me in. It requires super-human discipline to keep me offline and focused.

The two most important and obvious: write daily (or as often as you can) and read all the time, in every genre.  But here’s another: Don’t keep reworking the same book over and over. We know that writing is basically rewriting and that we need to edit and revise. But a writer can get so hung up on one book, reworking and rewriting, that they never progress.  I can’t tell you how long that is. I worked on a book for nine years, reworking it every time I learned new craft. It ended up like a Frankenstein creation. I’d have been far better off to let it go and move on to a different story.

What’s next for you? Can fans of STRIPPED BARE look forward to another Kate Fox mystery?

Dark Signal, the second in the Kate Fox series, is in the chute and I assume it will be released fall of 2017, in which a murder takes place on a Burlington Northern-Santa Fe train.  Also, in the fall of 2017, I’ll be included in an anthology of crime and paranormal short fiction, Blood Business, by Hex Publishers. 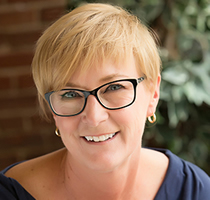 Shannon Baker writes the Kate Fox mystery series (Tor/Forge). Stripped Bare, the first in the series, features a sheriff in rural Nebraska and has been called Longmire meets The Good Wife. Baker also writes the Nora Abbott Mystery Series (Midnight Ink), a fast-paced mix of murder, environmental issues and Hopi Indians published by Midnight Ink. Baker was voted Rocky Mountain Fiction Writers’ 2104 Writer of the Year. She writes from the Colorado Rockies to the Nebraska Sandhills, the peaks of Flagstaff and the deserts of Tucson.