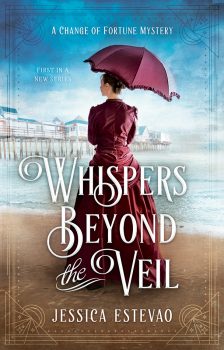 Most of Jessica Estevao’s family, including her parents, were born and raised in Maine. Estevao has spent most of her life in New Hampshire, but a few years ago purchased a summer property in Old Orchard, Maine. And now her new historical paranormal mystery series, WHISPERS BEYOND THE VEIL, is set there.  “There’s so much history here. It really lends itself to storytelling.”

The mystery, Estevao’s fifth, starts out in Canada in 1898. Ruby Proulx travels the medicine-show circuit, making the snake-oil that her father hawks as a cure-all.  When one of her father’s miracle cures goes horribly wrong Ruby has to go on the run. “I wanted Ruby to feel quite desperate to have an anchored home,” she says. “Having her grow up in a medicine show seemed ideal for that.”

Her medicine show background also gives Ruby the skills of a con artist. She is clairaudient, that is, she receives psychic information through her hearing. Estevao had a couple of remarkable experiences of her own that made her interested in where intuition and warnings come from, which is what led her to give Ruby this particular gift.

“When I was a teenager, a new driver, I’d taken my younger sister to a middle school dance. My family home had double driveways, shaped like a lower-case ‘h.’ No one ever took the shorter branch of the driveway. But on my way home from this dance, I heard this voice in my ear telling me to take the second driveway. At first I thought it was weird and dismissed it. But when I got closer to the first driveway, I heard the voice again, louder this time, so I pulled into the first driveway.”

As soon as she did, there was an explosion on the street just ahead of her. A car slammed into a tree right in front of the entrance to the second driveway. Had Estevao followed her customary route, she and her little sister would have been in a serious accident. “There is stuff you can tap into,” says Estevao. “I don’t know how or why or where it comes from, but I appreciate it.”

In WHISPERS BEYOND THE VEIL Ruby ends up in Old Orchard, throwing herself on the good graces of a long-lost aunt, Honoria Belden who runs a hotel that caters to spiritualists and their clients. “Spiritualism was very popular in that era. Arthur Conan Doyle believed in it. I wanted to have an unusual atmosphere for the main character to come to.” The Hotel Belden is not based on a real hotel, but Estevao borrowed the description of a respite hotel for missionaries that existed at the time, a lovely Victorian with a lot of gingerbread.

As if it weren’t hard enough for Ruby to start her life over, guests at the Belden start dying, murdered one by one. Ruby has to use all of her psychic gifts, both the real and the fake, to find the murderer before she is jailed for the crimes.

The book’s cover is a beautiful evocation of the story itself. Estevao really wanted the pier, the most famous icon for the town, on the cover if at all possible. The parasol is iconic for Ruby herself. “My editor at Berkley is really generous; she passes my suggestions on to the art department, though of course they are not committed to taking them.”

Estevao starts her writing process by grabbing a notebook and pen. She then proceeds to “interview” herself, writing the questions and their answers in the notebook. “Brainstorming is easier if I have a pen in my hand. I answer each question in a variety of ways, and when I feel I have the right answer, I circle it.”

The right answer leads to more questions. Why is the victim dead? Who is the victim? Who are the suspects? What are all the reasons why they could have committed this murder? How could they have committed the murder? Is this clue a real clue or a false clue? Estevao continues this process until she has a good grasp of the story, circling things that make sense given the character and her interactions with the other characters. Eventually, a theme evolves. “Often when I start to work I think it’s one thing, then it gets fleshed out and one of those other possible things ends up being something more interesting.”

She knows she has enough information when she feels a real itch to get going. At that point she switches to Scrivener and starts loading up scene cards. By then she knows the plot for at least a third of the book. She gives each scene card a unique title that sums up what is in the card. For this book one scene was labeled “camel” because there was a camel in the scene.

In the Scrivener synopsis section she writes down the goal for that scene, the reason why that scene is in the book, whether it is to introduce a new character or deepen a relationship. The goal for the scene might change, but she always has one listed. “If there is no juice in a scene, maybe it’s in the wrong place, or the wrong character delivering it, so having the heart of it there.”

A scene lacks juice when Estevao finds herself reluctant to write it. “If there is no passion, no enthusiasm, there is probably not enough bones to make its own scene. It should be combined and compressed into another scene, or maybe skipped altogether. If I don’t want to write them, no one will want to read them.” She writes about 2,000 words a days until she has a first draft. “I find the first draft to be the hardest. I love editing.”

Estevao is working on a sequel that will come out in 2017. 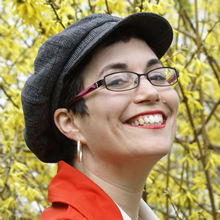 Jessica Estevao writes the Change of Fortune Mysteries. The first in the series, Whispers Beyond the Veil, will release in September 2016. She loves the beach, mysterious happenings and all things good-naturedly paranormal. While she lives for most of the year in New Hampshire with her dark and mysterious husband and exuberant children, she spends summers on the coast of Maine where she keeps an eye out for sea monsters and mermaids.

To learn more about Jessica, please visit her website.