“Stop the Presses!” and Other Newsroom Myths

A lot of people think the news business is like All the President’s Men: Woodward and Bernstein bringing down Richard Nixon. Or Spotlight, where crusading Boston Globe reporters expose scandal in the Catholic Church. Or countless other movies and novels and TV shows where someone dramatically yells “Stop the presses” just before breaking the big story that catches the bad guys.

Except it doesn’t really happen like that for reporters most of the time.

Let me share with you a few hard truths on what’s right and what’s wrong about the way journalists are depicted in books and on screen—and why “wrong” is not always a bad thing.

MOST NEWS HAPPENS VERY, VERY FAST  I liked Spotlight, but cringed when the investigations reporter tells the new editor of the Boston Globe it takes them four months to work on a single story. Editors don’t want to wait four months for a story. They don’t want to wait four days. The main goal at newspapers where I worked was simple: Get the next day’s edition out. Now, with 24-hour cable news, the web, and social media, reporters are under even more pressure to report news immediately. Sure, Watergate took 2 ½ years—but that’s the exception.

NO ONE EVER SAYS “STOP THE PRESSES!” That only happens in books, movies, and TV. If you stop the presses, you stop printing newspapers, so every paper I’ve worked on kept the presses running. The one exception I ever heard of was at the New York Post on the day President Kennedy was assassinated. The editor—who had always publicly ridiculed the “stop the presses” phrase—picked up a phone, dialed the press room, and said in a very low voice: “We’ll have to stop the presses.” Only time I know that ever happened.

….OR “GET ME REWRITE” EITHER People used to shout “Get me rewrite!” in the old days when reporters called in stories from the field to “rewrite people” clicking away on typewriters in the newsroom. Not anymore. Now reporters can file their own stories direct from the scene via iPads, smart phones, Twitter and all the rest. Okay, it’s not as romantic as “Get Me Rewrite”—but it’s a helluva lot quicker.

A REAL REPORTER’S JOB CAN BE BORING Covering budget stories, city council meetings and press conferences isn’t too exciting. But that’s what most journalism is. Fictional reporters, on the other hand, lead very colorful lives. They chase dramatic stories, battle bad guys, and seem to be in constant danger. Why is this? I always thought Raymond Chandler explained it best when someone criticized his Philip Marlowe for not being a realistic private detective, claiming no P.I. gets hit over the head with a sap and meets a beautiful dame every day. Chandler replied that if he wrote about what a real private detective does all day— going over divorce papers and the like—no one would read his books. Same with reporters.

COPS CATCH MURDERERS, REPORTERS DON’T I’ve written  three books and a novella featuring my fictional newspaper hero Gil Malloy. He’s chasing a serial killer in all of them—which means he has solved maybe 25 to 30 murders in a few short years. Does that seem realistic? Of course not. I can’t recall a single instance where a real life reporter I knew single-handedly captured a killer. Cops catch the murderers, and reporters cover the story. Except in fiction. 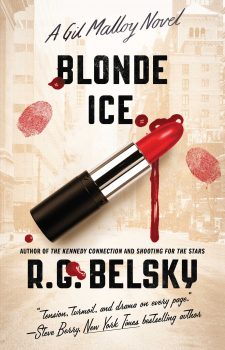 GETTING LOST DOWN THE SOCIAL MEDIA RABBIT HOLE It’s impossible to write a book about a reporter today without including stuff about social media. It’s also impossible to keep up with all the fast-moving aspects of social media and tech in the news business. Which is why so many get it wrong. Whenever an author tries to use social media in a story—and I’m one of them who do—it stands a good chance of being outdated by the time the book comes out. The only foolproof solution is to set the story in another era before the Internet, like Sue Grafton does with Kinsey Milhone in the ‘80s. Hey, those pay phones are a lot simpler to write about than apps.

“FEEDING THE BEAST”—THE FEAR FACTOR  The biggest thing that most fiction writers don’t understand about reporters (or accurately convey much in their work) is the fear. Because fear is the secret motivation that drives real-life reporters day in and day out. Fear you won’t get the story. Fear someone else is going to beat you to it.  And fear that no matter how successful you are, are you going to be able to do it again? They call it “feeding the beast” in the news business—the constant pressure to produce headlines.  There was once a reporter who won a Pulitzer and his paper threw a big party to celebrate. Midway through the party, his editor said to him: “So what have you got for tomorrow?” Maybe you really need to have been a reporter yourself to put that kind of intensity and insecurity into your fictional reporter character.

BUT THERE’S ONE THING THAT ALMOST EVERYONE NAILS PERFECTLY IN NOVELS, TV AND MOVIES  That’s the romance and mystique of the job. Being a reporter really is something special—both in real life and in fiction. Which is why people like me keep writing about them and why the audience cares. My favorite quote about reporters comes from Humphrey Bogart in the movie Deadline, U.S.A. (perhaps the most accurate movie portrayal ever of a newsroom). He plays a fictional editor at a fictional newspaper who tells a young job applicant: “So you want to be a reporter? Well, here’s some advice…don’t ever change your mind. It may not be the oldest profession, but it’s the best.”

Damn, now he sure got that right!