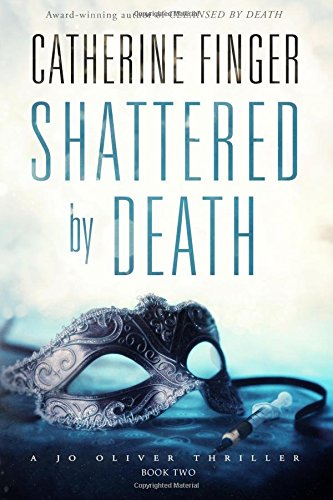 As a thriller writer, my Judeo-Christian roots are on display every time I create the classic Good v. Evil scenario inherent in the genre. I love playing with the idea of justice, and choosing whether or not the good girl or guy will win in the end.  And I really enjoy the process of creating a memorable bad guy or girl.

My goal as I craft thrillers is to come up with an antagonist worthy of Police Chief Jo Oliver—my protagonist.  Nothing makes my heroine look better than pitting her against a skilled antagonist. Nothing makes my readers respect her more than watching her put herself in harm’s way in order to protect others from a cunning adversary. Creating bad guys—and girls—who are smarter, stronger, and maybe just a step or two ahead of Chief Josie makes my heart sing.  And when my heart sings, my stories sing.

Ever wonder where ideas for creating killer characters come from? Join me for dinner sometime! One of my favorite conversational questions is this little beauty: if you could kill someone and get away with it, how would you do it? I’ve posed this question to dinner companions; seatmates on planes, trains, and automobiles; and recently to a man I met on an ocean kayak tour. Once the initial shock wears off, you’d be surprised at the number of thoughtful answers I’ve received over the years!

The killer in my second book came to me as a result of one such dinner conversation. I knew I wanted to create a seemingly trustworthy foe, and throw Chief Josie under the bus of suspicion early on. The killer instincts of this particular adversary unfolded as the story developed, contrasting nicely with unexpected character traits like loyalty, wisdom, and perseverance.

The bad boy—or girl, the night is young—in my third book bubbled up from the geography of the story. I wasn’t expecting some of the twists and turns generated by my killer during a harrowing manhunt that crisscrossed the Wisconsin countryside. The geography and terrain involved in the story illustrated skill sets that unfolded during the chase and the killer evolved as I told the story. Contented with my novels to date, I thought I might be on a character-creating roll.

But then, something happened.  I met a guy. In Maui.

We met on a kayak adventure during whale season last December. This hot, blond, surfer dude has been riding the waves of my hijacked mind daily ever since. He had a wicked sense of humor, a gentle heart, a body made for board shorts—and a beautiful wife.  Family man or not, I knew on the spot I’d found my next killer. I fell for him immediately.

My books begin with either a set of driving questions, or a compelling character to throw against my protagonist—Police Chief Josie Oliver—and see if they stick. This man’s quiet, grounded spirit, coupled with his natural playfulness struck me as the makings of a perfectly unexpected killer. The fourth book in my Jo Oliver Thriller series started itself on my hotel room’s lanai.

Days later, the inner workings of my antagonist presented themselves during my morning devotional! If you’ve ever read the Old and New Testaments, you know they’re packed with stories of adventure, mayhem, and messed up relationships. Crooked lives, messy pasts, and crazy families serve as the backdrops for great Biblical stories of faith and hope. I didn’t come to my devotional time that morning looking for a character, or even thinking about my story, but I left with my killer character fully formed.

I was reading the book of Jude (New American Standard Bible) that morning, aka, ‘the warnings of history to the ungodly.’ Jude described evil, and those who practiced evil, as “men who defile the flesh and reject authority” in verse 8.  I wondered what my killer might have been like as a teenager. Nefarious hobbies came to mind. Backstory.

Verse 10 had more to say: “…these men revile the things which they do not understand; the things they know by instinct, like unreasoning animals, by these things they are destroyed.” Can I get an ‘Amen?’ I loved the notion of my killer ‘reviling things he doesn’t understand.’ What kinds of things would a really bad guy not understand? Love? Happy families? People he perceives as having things he’ll never be able to enjoy? Motive jumped off the pages of the Bible during what was supposed to be my morning devotional and into my writer’s heart.

An entire character started taking shape as I read this one little chapter over and over during the next several days.  Jude issued a lament in verse 11: “Woe to them! For they have gone the way of Cain!” More backstory…clearly my bad guy killed his family, if I’m going to follow this Jude-thread (and I am!)

The piece de resistance was found in verse 12: “These are the men who are hidden reefs in your love feasts when they feast with you without fear, caring only for themselves; clouds without water, carried along by winds; autumn trees without fruit, doubly dead, uprooted; wild waves of the sea, casting up their own shame like foam; wandering stars…”

This was the stuff of novels and nightmares! I joyfully began crafting an outrageous adventure through the impossibly beautiful landscape of Maui. This powerful imagery from the book of Jude pulled me into discovering the internal world of the killer my Chief must face and overcome in book 4.

At the end of the day, I want my readers to walk away exhausted from a wild ride, with a sense of hope. Killer characters help refine protagonists with their tools of the trade—relentless evil and nonstop action. Enduring protagonists—like Police Chief Jo Oliver—become better versions of themselves for having gone through the refiner’s fire. 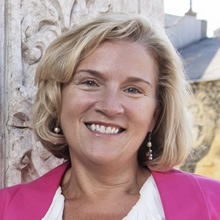 Like her heroine Police Chief Jo Oliver, Catherine Finger is committed to protect and to serve. But instead of handcuffs and handguns, she uses her wit and wisdom as a high school superintendent in Grayslake, IL. The award-winning Shattered By Death is book two in her Jo Oliver Thriller Series.

When the Music’s Over by Peter Robinson