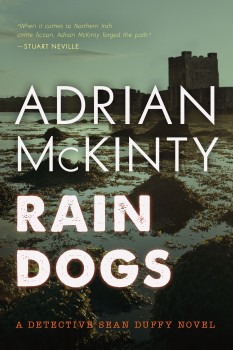 Things are not looking good for detective Sean Duffy, and not just because a dead body was found. It’s 1980’s Belfast, bombs and assassinations are a daily occurrence, and Duffy is a Catholic detective working for the largely Protestant RUC (Northern Irish police force.) This doesn’t make him the most popular guy in the precinct. Intrigued by the apparent suicide of a journalist in the courtyard of Carrickfergus castle, Duffy decides to investigate further, which leads him to a huge case of corruption that might reach the highest levels of power in the UK.

RAIN DOGS is the new crime novel by Irish author Adrian McKinty, and the fifth adventure of detective Sean Duffy. With this series, which started in 2012 with The Cold Cold Ground, and has produced a book a year ever since, McKinty creates a dense and engaging noir tale that takes places during the most critical period of the Troubles. To create a series based on a character he calls “a man of time and place”, the author relies on references to music and pop culture.

“I do a lot of research for the Duffy books, but I remember a lot from that time. You have to keep the series fresh by developing the characters and putting them in believable situations. Otherwise, you’re just doing it for the money.” To make the setting even more believable, Duffy lives in the house the author grew up in. “People in that neighborhood would go crazy at the idea of having a Catholic, bohemian, middle class cop from Derry living next to them,” says McKinty.

Though writing about a specific time and place, McKinty states that his job is not teaching history, but to use the facts as a skeleton to frame the fiction narrative. “You won’t find a lesson on the Troubles by reading the Sean Duffy series,” he says. “But sometimes fiction is a way of conveying the atmosphere of a place better than history ever can.” As a writer, McKinty owes a lot to the examples set by crime masters such as Thomas Pynchon, James Ellroy and Dashiell Hammett, but when asked about his greatest influences, he mentions Jane Austen and Fyodor Dostoyevsky, “the two greatest novelists of the last 200 years.”

McKinty’s first novel, Dead I Well May Be, was published in 2003, and was followed by The Dead Yard (2006) and The Bloomsday Dead (2007). Together, these three are known as his Dead Trilogy. Later McKinty would craft a new trilogy, this time a YA science fiction series known as The Lighthouse Trilogy. In the meantime, he specialized in contemporary noir with novels such as Hidden River (2005), Fifty Grand (2009) and Falling Glass (2011), that got lots of praise and comparisons to authors such as Dennis Lehane.

The Sean Duffy series also contains the books I Hear the Sirens in the Streets (2013), In the Morning I’ll be Gone (2014), and Gun Street Girl (2015). McKinty was praised by fellow writers and the British, Irish and Australian press.

If you like gritty crime stories on the dark side, give RAIN DOGS a try.

Adrian McKinty is the author of fourteen previous novels, including DEAD I WELL MAY BE, FIFTY GRAND, FALLING GLASS, and, most recently, the Detective Sean Duffy novels THE COLD COLD GROUND, I HEAR THE SIRENS IN THE STREET, and IN THE MORNING I’LL BE GONE. Born and raised in Carrickfergus, Northern Ireland, McKinty was called “the best of the new generation of Irish crime novelists” in the Glasgow Herald.