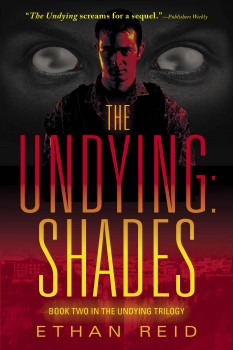 Inspired by the strength of some of the women in his life who were facing tough times, Ethan Reid conceived The Undying trilogy, a series of apocalyptic novels, the first of which is centered on a young American named Jeanie learning to survive after a worldwide electromagnetic pulse creates a terrifying new reality.

THE UNDYING: SHADES, the second book in the trilogy, picks up on the journey several years later, as Jeanie and the baby boy, Ren, she saved attempt to survive in the devastated landscape of Southern Spain.

“SHADES is, at heart, a coming-of-age YA novel, as the main character is a teenager struggling to survive in post-apocalyptic Europe,” Reid says. “While the first novel was about birth and survival, the second book follows Ren’s adolescence as he enters adulthood.”

Shifting the focus to Ren was perhaps the hardest part about writing SHADES, Reid says, admitting that the strong, resilient Jeanie was a tough character to leave behind. And as the dark—and sometimes comedic—story moves forward, readers are introduced to several new characters, both the living, and the undead.

“I find humor is the way to stay afloat,” Reid says. “To create characters who can laugh around the campfire after clearing out a city full of the undying ones.”

Having studied with screenwriters in the past, the books often have a theatrical feel about them—the sense that people can “see” a movie in his work. While he’s not actively pursuing screenwriting right now, Reid admits he can envision the series on the big screen, perhaps with Ellen Page or Shailene Woodley in the role of Jeanie, and maybe Logan Lerman or Nick Robinson as Ren.

“I had a chance to study with fiction authors and screenwriters while at USC, but that’s not my main focus,” he says. “That said, I always throw in a huge explosion toward the end no matter the medium!“

With explosive SHADES novel now out in the (non-apocalyptic) world, Reid is working on book three, with an eye on perhaps expanding the series to give “life” to some of the secondary characters.

“There are a company of characters in SHADES who each have their own stories well before they meet up with Ren and Jeanie,” he says. “I have to admit I’ve given some thought to delving deeper into the pasts of some of them.” 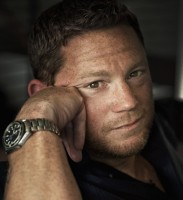 Ethan Reid received his BA in English from the University of Washington and his MFA from the University of Southern California’s MPW Program, where he studied under author S.L. Stebel, Oscar-nominated screenwriter Sy Gomberg, and Oscar-winning screenwriter Frank Tarloff. Ethan is a member of the Horror Writers Association and the Pacific Northwest Writers Association. He lives in Seattle.

To learn more about Ethan, please visit his website.