For our international readers, in a rare departure from our usual format, we shine a spotlight on this Austrian-based writer. A companion piece on German author Kathrin Lange can also be found in this issue. —The Editors

BLUNZENGRÖSTL is a traditional Austrian meal consisting of fried potatoes and black pudding—not for the faint of heart. It’s also the title of the first book in a thrilling new mystery series by Ines Eberl.

The hero is a food journalist on the hunt for regional recipes—but as he makes his way across the world, he encounters much more than an enhanced palate: danger, mystery, and even murder.

“The knife on the cover is an allusion to the murder, but also the tool of chefs,” Eberl says, noting that for this first book in the Murder a la Carte series she worked with the Red Bull Media House to be able to include recipes throughout the story.

For the sequel, Eberl will be working with a famous German chef, who she teases may play a nefarious role in the underlying mystery.

Unfortunately, English readers may have to wait a while to dip into this literary buffet. Eberl and her publisher are currently working on the translation of her first crime novel set in Salzburg, and continue to look for an American publisher. If genetics play a part, Eberl’s chances are pretty good.

“I’m the daughter of a well-known European historian and writer,” she says. “His books have been translated into seventeen languages. I grew up with writing.”

And even though she’s a former lawyer, Eberl admits the world of books has always been her true home. Now, having fully immersed herself in her craft, Eberl feels she’s come full circle, and can finally devote the majority of her time to doing what she loves—writing.

“For work, I need routine and continuity,” she says. “In the morning I write my new book. Then I do email and take long walks with my hounds—I’m a hunter—to get my head clear and develop new ideas in the afternoon.”

The process doesn’t end there. Evenings are spent revising the day’s work. It perhaps sounds never-ending, but to Eberl, it’s a true labor of love, and her commitment pays homage to her father, whose picture rests on her desk, along with an image of an eagle, a symbol of her motto: Don’t chatter with the geese, fly with the eagles.

While she waits for her Murder a la Carte series to take flight, Eberl has begun a new project that very much takes her out of her comfort zone—a book that fuses genetic engineering and synthetic biology.

“The research for this novel is the most exciting thing I have ever done,” she says, her enthusiasm palpable. “I have to note that the reality surpasses even the imagination of an author.” 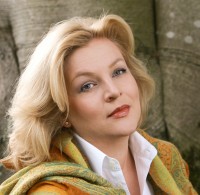 As well as being a crime author, Ines Eberl is an Austrian law historian and practising lawyer. She was born in Berlin, Germany, studied at Salzburg University and practices law in Salzburg. She is a member of both the International Thriller Writers and the Crime Writers´ Association. Her debut novel The Sound of Murder has met with an excellent reception. Murder a la carte is her fifth novel.

To learn more about Ines, please visit her website.