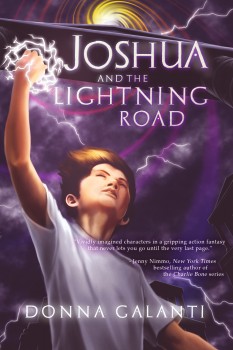 Donna Galanti has led an interesting life to date, and an interesting life can lead to interesting stories. By the time she was nine, she’d lived in nine separate places. And she kept moving. She’s lived in England, Hawaii, New Hampshire, and once went to school in an English castle not unlike Hogwart’s, the fictional centerpiece of the Harry Potter series.

The first book to leave her breathless was C. S. Lewis’s The Lion, The Witch and The Wardrobe. She went on to devour all his other books, along with those of Roald Dahl. She wrote her first play, a mystery, at the ripe old age of seven. Decades later she wrote a pair of paranormal suspense novels, A Human Element and A Hidden Element, two-thirds of her Element Trilogy.

And now, taking a breather from the adult world, Galanti has penned a Middle Grade (MG) novel, JOSHUA AND THE LIGHTNING ROAD, returning to the books of her youth.

Galanti took some time out to talk about her latest book with The Big Thrill.

In JOSHUA AND THE LIGHTNING ROAD, you’ve created another world that exists alongside ours. The story takes a dramatic turn when first Joshua’s friend Finn, then Joshua himself, are whisked away to this second world during an unusual lightning storm. Tell us about this place where kidnapped kids are kept in a pit until they are sold as slave labor and the guards carry “snake spears.”

The medieval world of Nostos (meaning “homecoming” in Greek) consists of twelve realms that steal mortal children from Earth via the Lightning Road and uses them for resources. Between the realms are lawless lands where outcasts roam, and if you’re a slave child lucky enough to escape your workhouse—and the clutches of the Child Collector—you’d better watch out for The Edge, where you could fall into the Great Beyond and never return.

Humans are thought of as uncivilized, ignorant beings, and therefore expendable. A myth exists of a way to change the hierarchy of power and end mortal slavery. Through the generations, some have tried and been cut down by those who want power for themselves—but someone may be coming, whose voice will not be silenced…

Avoiding any major spoilers, explain how Joshua discovers other powers in this second world. Tell us how, and why this makes him a hero we root for.

Joshua puts himself in harm’s way to rescue a friend and is thrust into a heroic situation, and a new world, from the start. In this new world he discovers its magic through witnessing the evil power of the Lost Realm rulers, but also through the magical creatures that come to his aid. He also quickly discovers who he can trust and when, and that the power within us can be even bigger than magic. He tells his friend, “You don’t need powers to do the right thing. All you need is to believe in yourself.”

Following through on the power themes in JOSHUA AND THE LIGHTNING ROAD, I’ve also launched a Kid Heroes series that features inspirational kids that have the courage inside to embrace their own power.

In your career to date, you’ve written two novels for adults, one nonfiction book, and now the first of a new MG series. The artist Pablo Picasso famously said, “Every child is an artist. The problem is how to remain an artist once he grows up.” I like to think he was talking about creative people of all persuasions—writers included—who must stay in touch with a certain sense of uninhibited playfulness. This is, perhaps, even more true in writing for a younger audience. Did you have to climb into a different frame of mind to write MG? Did you prepare differently?

Reading popular children’s books is one way I stay in touch with how books are successfully written for the tween set. My son is an avid reader and also loves to recommend great reads. Since switching from writing thrillers for adults to thrillers for middle grade, I’ve learned there is a different set of rules. You can thrill kids but need to follow guidelines that include no cursing, no promotion of killing, and no romance—except for a crush.

More guidelines I follow for writing thrillers for kids:

After reading your website and your MG writing, I think it’s fair to say that you are possessed with a certain childlike whimsy. It serves you well in JOSHUA AND THE LIGHTNING ROAD. How does a mature woman, wife, mother, and one-time sailor step out of her adult skin?

I’ve always loved fantasy. Didn’t many of us live in a world of fantasies as a child? We can lose that as we become adults. The first story I wrote when I was ten was about dodo birds, a flying ship, and wizards. Today, I blend fantastical elements into both my thrillers for adults and children.

The editor for my adult thrillers was the first person to recognize, through an adolescent character, that I had a natural young voice in my writing. I went on to explore that young voice and fell in love with writing for kids. When I write, I return to the magical worlds of my youth, where monsters and faeries roam the land. I love that I can return there now while staying grounded as an adult—and also share this magic with my son. Through my stories I can become these magical characters, and wield their powers.

What is your take on the state-of-the-art of the MG category? How has it evolved since its upsurge of popularity?

Middle grade is not only for kids anymore. Just check out how many grownups are reading it. Adults can learn a lot looking at life through the eyes of a child. We are role models for children, but we can still be inspired and empowered through young characters. The Harry Potter series was the major catalyst. Not only did that series change what kids, teens, and adults are reading, but Harry crossed over from a tween to a teen in his adventures, giving him even more appeal to a wider audience.

There were no such things as middle grade and young adult categories when I was a kid. I was reading Sidney Sheldon, V. C. Andrews, and Danielle Steele as a youth. Now kids have categories that cater just to them and they gobble the characters and series up. There is a loyalty that runs thick amongst tweens and teens for “their books”—and a certain fandom that goes along with that. I think that’s wonderful!

With the second book in the series, Joshua and the Arrow Realm, due from Tantrum books in the winter of 2016, what can readers expect from Joshua and his adventures going forward?

Set in a different realm, Joshua is called to free his friend who’s been enslaved as a power pawn in a queen’s quest to rule all. But when Joshua becomes bait in her hunting game, loses his powerful lightning orb, and his friends turn on him, he wonders if he can survive on wits and instincts alone and not only save his friend—but himself.

The book is rich in magical mayhem like book one and delivers action-packed adventure filled with friendships, battles, beasts, and bad guys.

Not coincidentally, you have a son named Joshua. In what ways did he inspire this new series?

Joshua absolutely inspired the book! He is the perfect age for my book’s audience and he actually helped with plotting and magical creatures. He was also great as a first-reader and told me things like, “Mom, a kid would not say that!”

He also inspired the very first story I created about a boy named Joshua. Years ago when my son was four we’d sit on the front stoop together at twilight under a tree and watch the stars come out. It became story time too. That’s where I would spin wild and silly tales for him. I spun this one tale about a fantastical world where anything could happen—and did. It appealed to my desire to create new worlds where we could live out magical and heroic adventures. The story led us to a place where my son and I could dream. A place where friendships were forged, loyalties were made, courage was tested, and fellowship ruled—all led by a hero who came into his own, Joshua.

Those summer nights under the stars faded but the idea didn’t. The story from a stoop swelled in my imagination and eventually became JOSHUA AND THE LIGHTNING ROAD, the book of one boy who finds out how a lightning bolt could steal away his best friend to another world and change their lives—or end them.

And last, whimsically, you claim to always read the first and last line of a book before deciding whether to buy it. Do you recommend this test for potential readers of this book?

No, please do not do this with my book! The last line has spoilers! For me, I figure if a first and last line can grab me, then the tale in between will carry through.

Check out Donna Galanti’s book trailer for JOSHUA AND THE LIGHTNING ROAD here.

Donna Galanti is the ITW Debut Author of A Human Element and A Hidden Element (The Element Trilogy, Imajin Books) and the Joshua and The Lightning Road series (Month9Books). Donna is a contributing editor to ITW’s the Big Thrill magazine and blogs at Project Mayhem. She lives in Pennsylvania with her family in an old farmhouse.