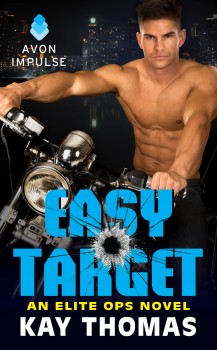 The author answers a few questions for The Big Thrill about what it’s like writing this high octane, sexy suspense series.

Tell us more about EASY TARGET.

AEGIS: an elite team of ex-military men who will do anything for their country… and their women.

Fighting to clear her brother of murder, freelance reporter Sassy Smith is suddenly kidnapped and thrown into a truck with other women who are about to be sold…or worse. When she sees an opportunity for escape Sassy takes it, but she may have just jumped from the frying pan into the fire.

Former Marine Bryan Fisher (a.k.a. Hollywood) is no stranger to dangerous situations, or to his best friend’s little sister. When he rescues Sassy, Bryan is determined to keep her safe…if he can keep his hands off of her. Because Sassy is all grown up and not at all like the girl he used to know. But he’s got bigger problems. And with enemies coming at them from every corner, Bryan and Sassy will need to work together if they’re going to survive.

That’s the back cover copy. At its core this story is about who and what we’ll risk to save the people we love.

What would you risk to save your brother’s life? Would you travel across a continent? Put your own life at risk? Put others at risk?

This is the question of EASY TARGET. Sassy Smith’s brother has been wrongfully incarcerated in a foreign prison where his life is threatened on a daily basis, and she’s determined to prove his innocence and set him free. To do that, she’ll be forced to see just how far she’ll go to save him. The problem is that the boy she grew up with and never quite got over wants to help. A very different man from the boy Sassy grew up with, Bryan Fisher (a.k.a. Hollywood) is now fighting his own demons from the past.

Writing this book made me examine what I would do and what others might do to save the people they care about the most. Putting oneself at risk is a no brainer. That’s “Hero 101.”

But what about putting others at risk to save someone you love? What’s considered “acceptable risk?” To save your brother’s life, could you risk a friend’s reputation or your lover going to jail? What’s considered heroic, and what’s considered … wrong? It was an interesting question to wrestle with as I wrote.

What was the most interesting aspect for you in writing this installment of the series?

This is the third book in a continuing series. While each story stands alone, EASY TARGET completes a mystery arc that has now stretched across all three titles of the series. Having characters whose growth arcs and story lines intersect across multiple books was a new writing experience for me. I’ve written connected books before (this is my seventh published novel), but never ones with story lines quite this enmeshed.

The villain of the first two books in the Elite Ops series (Hard Target and Personal Target) is revealed in EASY TARGET. As a “writing pantser” (I don’t outline much before I start writing), planning that villain’s path through the three books was a real challenge. I knew who the villain was before I started writing Book One (Hard Target), but I didn’t know exactly how everything was going to weave together to keep the villain’s identity hidden throughout the first two books and still keep those stories complete in and of themselves as “stand alone” reads. I loved stretching myself as a writer to do that. Maintaining the tension and suspense over eleven hundred pages in these three books was a challenge, but something I thoroughly enjoyed.

I don’t usually get to know my villain as well as I did with this series. Having written him in the background of Hard Target and Personal Target, it was fun to finally shine a light on him in EASY TARGET.

How do you recharge after finishing a book?

I read a great deal, but since I generally read all the time that doesn’t exactly count as “recharging.” I watch good television. There is some amazing writing on TV right now, and I think many of the stories on television are more creative than those currently on the big screen. I hang out with my family. I do home decorating projects and yard work, and I generally catch up with friends I’ve been ignoring while I’ve been in that last frantic push to finish the manuscript.

I’m working on Book Four in the Elite Ops series. While EASY TARGET answers most of the questions readers have had about AEGIS, there are a couple more characters from the Elite Ops world whose stories I’d like to tell.

Award-winning author Kay Thomas didn’t grow up burning to be a writer. She wasn’t even much of a reader until fourth grade. That’s when her sister read THE BLACK STALLION aloud to her. For hours Kay was enthralled—shipwrecked and riding an untamed horse across desert sand. Then tragedy struck. Her sister lost her voice. But Kay couldn’t wait to hear what happened in the story—so she picked up that book, finished reading it herself, and went in search of more adventures at the local library.

Today, Kay lives in Dallas with her husband, their two children, and a shockingly spoiled Boston terrier. Her national best-selling “bulletproof” novels have been translated into multiple languages. HARD TARGET: Elite Ops—Book 1 was a HOLT Medallion Award of Merit recipient and a GDRWA Booksellers’ Best nominee for the Best Romantic Suspense of 2014. EASY TARGET (Elite Ops #3) releases June 9 from Avon Impulse.

To learn more about Kay and her books visit her website.