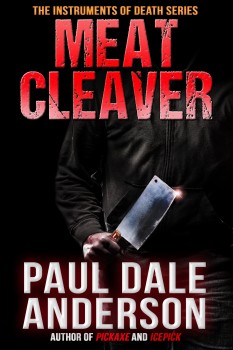 I begin this article with the background of the Instruments of Death series, of which MEAT CLEAVER is the fifth entry. I lived in Chicago and worked at the American Society of Clinical Pathologists’ Chicago headquarters, directly across West Harrison Street from the Cook County Medical Examiner’s office, when I wrote Claw Hammer. My ASCP job was to sell continuing education classes to pathologists, and I got to sit in on many of those classes because I was the person who registered pathologists and medical technologists for various courses. I set up microscopes in classrooms at conference centers, ran the overheads and slide projectors, hawked new books published by the Society or the College of American Pathologists, and hosted elaborate cocktail parties for the Docs at national medical conferences. One of those ASCP classes featured the latest techniques of tool mark analysis available to forensic pathologists interested in identifying the instrument of death, and I was fascinated to learn about the variety of ways people quite often used common household implements to kill beloved family members and friends.

That class reminded me of several terrible tragedies that had happened to grade-school classmates of mine in my own hometown of Rockford, Illinois. I recalled awakening one dawn to the sound of sirens when I was only about eight or nine. I learned that a neighbor had allegedly gone crazy during the night and killed his entire family—all but one daughter who survived–with a claw hammer. The milkman, the same milkman who had just delivered milk to my house, discovered the bodies when he entered the neighbor’s house to put milk in the refrigerator as he normally did twice a week. In those Father Knows Best and Leave It to Beaver days of the early 1950s, people were very trusting and nobody ever locked their back doors. All that changed, of course, after an entire family was killed in our close-knit suburban neighborhood. It never dawned on us that locking the doors would do no good if the killer lived inside the house and had keys.

Not long after that first tragedy, the mother of another female grade-school friend was electrocuted in her bathtub. Supposedly, a radio fell off a shelf and added 110 volts to an afternoon bubble bath and fried the lady like a lobster. Police arrested the lady’s husband and charged him with her murder. My young friend had to leave school to go live with her grandparents. I never saw her again.

One of my favorite uncles, Eric Ekebom, was a Rockford police detective sergeant and I remember asking to see his gun when I was too young to know any better. He told me he hadn’t had to use his gun even once in more than twenty years on the police force. He did carry a gun, he explained, but he said he really didn’t need one because “good detectives use their brains and not guns to catch criminals.” I’ll always remember that. Eric was the detective who reorganized the Rockford Police Department’s record bureau in the 1930s. He became the police department’s forensic and identification expert, and he served as the President of the International Association for Identification, the largest forensic organization in the world, from 1956 to 1957.

When Pinnacle Books bought two of my novels and wanted them delivered right away, I wrote a rough draft of Claw Hammer and sent it off with the expectation I would have time to revise and polish the manuscript. I had one day between the time I received the page proofs and the deadline for getting the completed novel back to New York in time to make the publishing window. I over-nighted the proofs back. I have never missed a writing deadline in my life. In the old days when I was learning the newspaper business, we published what we had in order to make a deadline even if we didn’t yet have the full story. “Go with what ya got,” the editor called out as the daily deadline approached. Some stories were incomplete or inaccurate. We knew we always had the next day’s edition to round out the details or publish a correction. I’m glad Claw Hammer endured to see a next edition.

Claw Hammer was my first published psychological horror novel, and since its original publication in 1989 I have written nine additional suspense-thrillers/police-procedural novels set in imaginary Riverdale, Illinois. Riverdale is a combination of my native Rockford with areas of Aurora and Oak Park, plus images from a dozen other northern Illinois cities where I’ve lived and written novels. Carl Erickson, the homicide detective from Claw Hammer, also appears in Pickaxe, Icepick, Sledgehammer, Box Cutter, and Pinking Shears. After Carl retires, Troy Nolan and Andy Sinnott take over Carl Erickson’s roles, both detectives appearing in Pickaxe, Icepick, and Meat Cleaver.

My comfort zone is sitting at my keyboard inside my own house writing novels and short stories or reading novels and short stories for review. When Gretta M. Anderson, my wife of 27 years, died three years ago, I abandoned the real world for multiple fantasy worlds where I could control the outcome of human interactions. Writing kept me relatively sane. Andy Sinnott is a lot like me. But you already guessed that, didn’t you?

I write not only for me and to maintain sanity, but I write for people just like me who love to read a good mystery. I try, first and foremost, to tell a good story because I love good stories. Some of my stories get really weird, and many of my characters bleed and feel pain and some die. I view the world as a dangerous place where bad things happen to good people. Not all of my stories have a happy ending. MEAT CLEAVER is a mixture of happy and sad because the novel closely mirrors real life.

I am neither a medical doctor nor a forensic scientist, nor am I a police officer or a civil engineer. I have, however, worked with medical doctors, forensic scientists, police officers, and civil engineers, and I have two earned master’s degrees and most of a doctorate. I have done extensive medical research for more than twenty years. I always try my best to be accurate in my descriptions of medical and police procedures. I also served time in the military, including tours in construction engineer units, and I am familiar with a variety of firearms. Nevertheless, my novels are works of fiction that spring from my imagination, and I do take liberties with verisimilitude in order to tell a good story. For me, story comes first.

As I said, MEAT CLEAVER, the fifth novel in the Instruments of Death series, and was released as an original e-book last month. I’m thrilled that Crossroad Press wants to publish the entire series for e-book readers. 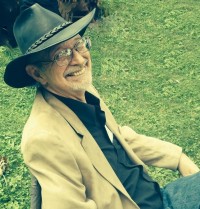