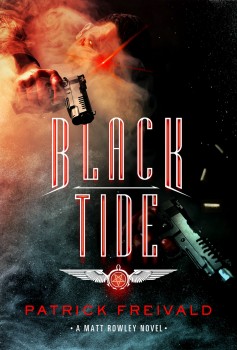 With super human strength, unnaturally fast reflexes, and enhanced senses, augmentation is something that Matt Rowley will have to learn to live with—for the rest of his life. And as cults spring up in worship of the demonic beings freed by the last of the Nephilim, the United States calls on Matt to meet the threat.

As his unnatural powers return with each passing day, Matt becomes the only weapon able to withstand eldritch forces that are older than time and darker than the blackest sea. But when his wife and infant son are taken in during a violent attack on his hometown, Matt becomes entangled in a vast conspiracy that could destroy his family —and his very soul.

BLACK TIDE is the sequel to author Patrick Freivald’s Bram, Jade Sky, a Bram Stoker Award finalist. This month, I had a chance to catch up with Freivald for The Big Thrill.

What drives you to write these stories, Patrick?

It’s fun! I started writing for publication with my twin brother, Phil. I got bit by the writing bug, and he didn’t, so Blood List is our only collaboration thus far. Since then, I’ve completed six novels (and am shopping my latest to agents and publishers now), a novella, and many short stories. My writing ranges from young adult zombie satire, to FBI thrillers, to gory supernatural heart-pounders. I just tell the stories I want to tell, because I have fun telling them.

How has your professional career influenced your writing?

As a physics teacher by day, I’m a bit of a fanatic about research and getting the details right. This very much carries over into my stories. Even when there’s magic, there has to be an almost physics-like internal consistency to it, or it just becomes a sloppy MacGuffin Ex Machina.

Do you think evil should win in a novel? Why, or why not?

Sometimes, yes. In my teen years I became much more of a fan of Stephen King than Dean Koontz, because King is a sloppier writer. This sometimes results in some disappointing endings, but Koontz is too tidy—his good-guy protagonists would always win, and almost never pay a high price for victory. Predictability is the kiss of death for a thriller.

It’s my exact criticism of Age of Ultron: you know none of the main Avengers are going to die, and you know the world’s not going to end, so the ultra-high stakes were really no stakes at all. They’ve deflated their own tension before they even got off the ground.

Effective storytelling requires doubt, and doubt requires uncertainty. If the good guys always win, then your stories are predictable. It might not present a problem for any given story, but over the course of a writer’s career, it can get in the way.

How does your new book fit in with the rest of your writing?

BLACK TIDE is the sequel to Jade Sky, the second in a five-book series I’ve signed on to write for JournalStone. It’s unrelated to my YA zombie satire, Twice Shy and Special Dead, which are in turn unrelated to Blood List, which is about a serial killer trying to save his father’s life.

Will we see the characters in the book return?

The survivors, sure! I’ve got three more books to write in the series, and many of the characters that have appeared in the first two will have ever more important ongoing roles.

In addition, a prequel novella involving Matt Rowley and some of the other characters is forthcoming in the anthology Snafu Hunters from Cohesion Press, and you can get more of the world in the past four issues of Dark Discoveries magazine.

What writers do you enjoy most? 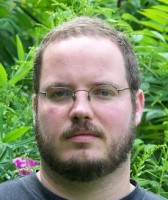 Patrick Freivald is an author, high school teacher (physics, robotics, American Sign Language), and beekeeper. He lives in Western New York with his beautiful wife, two birds, three dogs, too many cats, and several million stinging insects. A member of the HWA and ITW, he’s always had a soft spot for slavering monsters of all kinds.