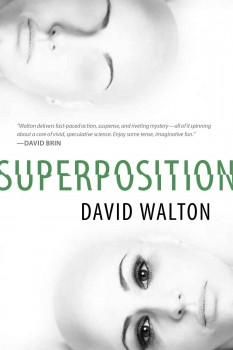 A scientist’s outlandish claims about the true nature of reality are initially met with cynicism by former colleague Jacob Kelley, until darker events unfold that force Jacob to take them seriously as he is thrust into a frantic dual reality where he is both the accused and the investigator.

SUPERPOSITION is cleverly written to reflect the quantum world, with parts separated and yet entangled in alternating chapters. This is a truly fascinating approach to thriller writing, allowing the reader a wonderful double view of the entire situation. For example, the story allows us to examine the protagonist’s development in two parallel settings, each providing different challenges to be overcome and thus causing divergent effects.

The story’s strength lies in its ingenious structure that neatly unfolds against an impressive backdrop of science. But fear not, this is no academic quagmire, but a readily digestible thriller.

So, if you are looking for a unique spin on a murder thriller, this could be the one for you—or your quantum twin.

Now, I will hand over to the author David Walton as he answers my questions about the book, the writing process, science, and science fiction.

The story draws on truly fascinating aspects of the quantum world. What would you say to potential readers of SUPERPOSITION who love thrillers but are a little science-shy?

I would say this book is for you! Although the action of SUPERPOSITION is driven by the quantum world, no understanding of quantum physics is necessary. It is no more written for physicists than medical thrillers are written for doctors (or westerns are written for cowboys). Think of Jurassic Park: it had a lot to say about genetics and chaos theory, but you certainly didn’t have to be a biologist or a mathematician to enjoy it.

SUPERPOSITION is about a father and daughter on the run and in danger for their lives. He is accused of a crime he did not commit, and his life turned upside-down by a technology he did not invent. Like a Michael Crichton novel, the science is central to why the events of the plot occur, but when you read it, you care more about the characters and the danger that threatens them than any details of the science or how it works. And if you end up learning a little bit more about quantum physics than you knew before you read it, I promise it won’t take anything away from the fun.

Are you most comfortable writing fiction that draws on your professional scientific expertise? Do you feel it is easier, or does the need for scientific accuracy actually make it more of a challenge?

It does make it more of a challenge, but not so much because of the need for accuracy. Writing about my technical expertise makes it harder to determine how much to explain, and how much a reader will already know. Readers (myself included) like to feel smart while reading a novel. If an author explains things I already know, it can feel tedious and patronizing. On the other hand, if the author goes into too much detail about technical minutiae only he cares about, the result is even worse. The goal is to hit just the right balance, capturing what is fascinating and new and wrapping it up in what the reader really cares about: the characters and the story. Fortunately, my quantum physics knowledge is as an amateur enthusiast, not a professional scientist, so I can pick out the whiz-bang cool bits and bring the reader along for the ride.

What fascinates you about writing science fiction? Do you feel you will continue along this path, or would you be tempted to explore other genres? If so, which one(s)?

Science fiction is the genre where anything is possible. Most stories are limited to what can actually happen in the real world, but science fiction writers are free to imagine beyond that. By putting people in impossible worlds and situations, we explore the boundaries of what it means to be human.

The great thing is, I don’t have to leave science fiction to explore other genres. SUPERPOSITION is, of course, a thriller. My previous book was Quintessence, an alternate historical fiction. Science fiction is such a large genre that it’s easy to expand into other types of stories. I must say, though, that the SF-thriller combination has been a delightful one, and I may stick with it for a while.

You make an excellent point about how placing people in unreal settings allows us to explore the meaning of being human. What aspects of SUPERPOSITION do you think achieve this?

Although SUPERPOSITION is based in some ways on real concepts of quantum physics, it also contains the fanciful idea that features of the quantum world can evidence themselves in the larger world that we can see and touch. This creates unreal situations for the characters—situations that could never possibly happen. Most dramatically, Jacob Kelley finds that his life has split. Both versions of him continue to exist, and the two Jacobs eventually meet. Clearly this is impossible. But which of us hasn’t wondered how our lives would have changed if we had made a different choice, or if a random event had fallen out differently? How might that one fork in the road have affected the rest of your life if you had taken the other path?

Considering the two Jacobs also asks questions about our identities. What does it mean to be me? Am I the sum of the choices I’ve made? My memories? My personality? If I went to a different college, or didn’t meet the girl I married, would I still be the same person? Am I even the same person now that I was five years ago, or will be ten years from now? What if I lost all my memories—would that still be me? By putting two versions of Jacob in one story, SUPERPOSITION can explore questions like these in ways standard fiction—where only the strictly possible happens—can’t. That’s the power of science fiction, to explore aspects of the experience of being human that go beyond what we see and hear and touch from day to day.

Of course, this novel is not a philosophy treatise any more than it’s a science textbook. It’s a thriller, packed with action and suspense. The beauty of the setting is that concepts like this are embedded in the story—ideas that I hope will keep you thinking long after you stay up all night to find out how it all turns out at the end! 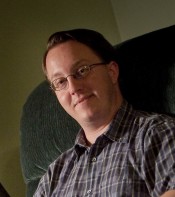 David Walton is the author of Quintessence and the Philip K. Dick award-winning novel Terminal Mind. He lives near Philadelphia with his wife, seven children, and three hamsters. By day, he works on classified defense technology, which not even the hamsters are allowed to know about. David’s fiction explores themes that skirt the edges of science and religion, such as human origins, the nature of truth, the certainty of death, and the nature of the soul.