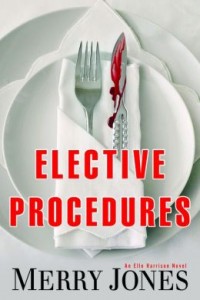 Elle Harrison is back in Merry Jones’s latest release, ELECTIVE PROCEDURES. Recovering from her husband Charlie’s death, Elle Harrison agrees to visit a fortuneteller with a girlfriend. The fortuneteller predicts that Elle will travel, meet a new man, and, oh, by the way—Elle’s aura is filled with death, the dead are drawn to her, and death will follow her everywhere.

Elle is shaken, but she tries to ignore the ridiculous prediction. She and her pals travel to Mexico where one of them has arranged cosmetic surgery, planning to recuperate in a plush hotel suite. But more is going on at the hotel than tummy tucks.

As dangers swirl, Elle is forced to face her unresolved issues with Charlie, even as she races to find the connections between the murders before more patients—including her friend—are killed.

And before she becomes prey herself.

Tell us something about ELECTIVE PROCEDURES that isn’t mentioned in the publisher’s synopsis.

Wow, there are so many things not mentioned. But the most important part to me is the psychological issues that the book deals with. For example, the protagonist, Elle Harrison, suffers from a mild dissociative disorder that causes her to mentally drift away when she’s under stress. So when things get dicey, Elle tends to go off into her thoughts, missing sometimes critical pieces of information. Her friends have learned to deal with this aspect of her character, and they call her dissociative incidents “pulling an Elle,” and they help her cope.

Some of the other characters in ELECTIVE PROCEDURES also deal with psychological issues such as body dysmorphic disorder, which causes a distorted self-image. Some of the people seeking cosmetic surgery in the book do so because they have this disorder and think they constantly need “fixing.”

It’s important to me that my stories are built around real issues and problems endured by real people. So my plots do more than just create suspense; they contain information about human circumstances.

Medical tourism is a growing phenomenon. Is there a procedure you would consider going abroad to have?

No. But I wouldn’t have a procedure done here, either. I’m a fan of aging naturally and celebrating my wrinkles and white hair.

I noticed your characters encounter interesting characters and circumstances. Do you find your research varies with different books? How did you approach the research for the plot points?

Research varies with each book. In each case, I study the material I need—in ELECTIVE PROCEDURES, it involved learning about psychological conditions (e.g., obsession, body dysmorphic disorder, dissociation) and cosmetic surgery (e.g., processes, healing). In addition to reading, I talk to experts—including patients who’ve dealt with the conditions/procedures involved. For this book, I went to Mexico to research the location, went to the festival of the Virgin of Guadeloupe, and visited the area around Puerto Vallarta so I could portray the location realistically.

You have a significant presence in nonfiction, exploring interpersonal relationships. What made you decide to write fiction?

Actually, fiction was my main interest, but I was told it would be easier to get published in fiction if I had credibility in nonfiction. I don’t think that was true. But it’s what I believed, so I started with nonfiction.

Whether fiction or nonfiction, though, my work focuses on interpersonal relationships. The core of the crime stems from what the characters want, need, expect, or withhold from each other.

The harshest comment was from my first agent who told me not to try to write fiction. She said, “You don’t have that type of mind.” Ouch. I mean, ouch.

Turned out she was wrong; I’ve already had a dozen novels published and I’m working on the thirteenth.

Which leads me to my comment to aspiring writers: Follow your passion. Write what feels right. Don’t listen to nay-sayers.

I’m working on a novel about memory and control. That’s all I can say. Bad luck to talk until it’s finished.

Okay, enough with the business questions. How about some fun stuff. You know, just between the two of us.

Sure. Here goes. The opportunity to go on a surprise vacation arises. You have ninety minutes to pack and get to the airport. Where will you go and what will you pack?

Unfair. I’d like to go to New Zealand. But also on safari in Africa. And also to Peru. Okay. I’ll pick Peru. The ruins. Machu Picchu. I’m fascinated by trips that take me out of our culture, into another one, especially into another time.

THE GOLDFINCH by Donna Tartt.

I’m a rower. I scull in a single or double shell with my husband on the Schuylkill River in Philadelphia. Mostly, it’s peaceful. I get to exercise in sunshine, accompanied by turtles and ducks. There was this one time, though, when I encountered a six-foot-long alligator. Seriously. I was in my narrow, thin-skinned boat, alone. Nobody in sight. And there he was. I don’t know where he came from or what he was doing in a river in Philadelphia. But luckily, he let me move along, and I’ve lived to tell the tale.

Merry Jones has written the Elle Harrison suspense novels (THE TROUBLE WITH CHARLIE and ELECTIVE PROCEDURES), as well as the Harper Jennings thrillers (including SUMMER SESSION) and the Zoe Hayes mysteries (including THE NANNY MURDERS). Her nonfiction includes BIRTHMOTHERS: WOMEN WHO HAVE RELINQUISHED BABIES FOR ADOPTIONS TELL THEIR STORIES and the humorous I LOVE HIM, BUT… Ms. Jones lives outside Philadelphia, PA.