Since I’d just spent the previous week preparing for this interview by reading DARE MEand THE FEVER—both of which drip with the drama of teenage girls—I had the strange feeling I’d gone through high school with Megan Abbott. So I asked her, since high school is all about finding a label that fits, how would she label herself as a writer?

So, what about this whole “Queen of Noir” thing?

“My stories are about people in dark places. To me, they’re stories about power. We can all relate to having something taken away or wanting something so badly. My characters often come from a position of powerlessness and yearning. Facing their own demons, and surviving.”

Yep. Sounds like high school. When I pointed out that if she were walking down the hallways of one of the local high schools, she might very well get stopped and asked to show her hall pass.

“I get that a lot,” she said. “The ‘you-look-so-young’ thing. I think it’s less about the way I look and more about that I’m from the Midwest.” She smiled. “I’m friendly.”

So how’d this friendly person get into the whole thriller/crime/noir thing?

“I’ve been reading thrillers since I was a kid, maybe ten years old. At that age, it was mostly writers like Patricia Highsmith and Ira Levin.” She must have noticed my eyebrows going up. “I was a precocious reader.”

And the brief reference to The Crucible in THE FEVER?

“As a kid I was fascinated by the Salem witch trials. My parents even took my brother and me to Salem when I was eight or nine. When I think about it today, there’s a connection to what I write about now. Here were these girls and women who, temporarily, held all this power. That certainly was on my mind in THE FEVER.”

Like they do in high school? (Early in DARE ME, Megan’s narrator says, “There’s something dangerous in the boredom of teenage girls.”)

“Friendships are so intense in high school. Especially when it’s a group of three girls. They’re a rehearsal for adult relationships, right? You feel so committed and then you’re not. You experience the fervency of a new friendship, you experience betrayal. And the nature of high school­—it’s like this fishbowl. You feel like you’re on display and everyone’s watching, even if they’re not. Now, with all the social media, you can’t shut it off. Even at night, when you should be able to get away from it, you can’t.” She paused and took a breath. “If you have a young woman who has experienced high stress—a difficult family situation, say—or even trauma, that intensity can become even greater and the challenges more profound.”

So THE FEVER’s about how challenging high school can be for teen girls? Doesn’t that make it Young Adult fiction?

“Those terms are convenient labels, but I think the lines have really blurred between YA and adult fiction and I’m not sure anyone knows where those lines are anymore. It used to be if there were too many adult characters in the book, you couldn’t call it YA. It’s a marketing decision more than anything. But I think readers respond to story, regardless of the age of the characters or where the book is shelved.”

THE FEVER, Megan told me, was partially inspired by the story of the Le Roy, New York girls who developed mysterious tics. Megan’s story begins with the heroine’s best friend being struck by an unexplained seizure in the middle of class. Throughout the story, other girls are afflicted in various degrees and the tale unfolds from three points of view, a teenage girl, her brother, and her father, a high school teacher. This, I pointed out, doesn’t sound like Megan’s typical crime novel.

“One of the things I wanted to explore was how hard it is to be a parent these days. They’re constantly being besieged by all the things they’re supposedly doing wrong, all the dangers that are out there. They’re told that they may be feeding them dangerous foods, giving them dangerous vaccinations. It’s so hard as a parent now. There’s so much hysteria about the risks and hazards their children may face.”

I pointed out that THE FEVER was the only one of her books I’ve read with leading male characters.

“ My second novel, THE SONG IS YOU, has a male lead, and for this book it seemed really important. After DARE ME, I’d spent so much time immersed in a very heightened ‘girl world.’ For this book, where girls are very much the spectacle, I knew I needed a perspective from the outside looking in. I also wanted to show a caring, positive dad. And a good brother. It’s very much a book about family—a family that seems broken but is actually quite loving and strong.”

As with just about any conversation between two authors, the subject of independent bookstores arose. (Okay, I brought it up because The Mysterious Bookshop made a copy of THE FEVERavailable to me five days before its official publication date so I could prepare for the interview.)

“I would have no career without the independents,” Megan said. And maybe because she also felt the need for a shameless plug, she added, “McKenna Jordan at the incredible Murder By The Book read my early novels and continues to be a big help. I don’t know if I’d still be publishing without booksellers like that.”

What about the whole Amazon thing? (THE FEVERis published by Little, Brown, a division of Hachette.)

Was she bullied in high school? Were these books her way of working out some revenge fantasies?

“No. I was a non-wealthy kid in a wealthy high school. I was aware of the cool elitism, how important it was the wear the right clothes. But I had no desire to be a part of that. I had my own niche. I was the high school newspaper girl.”

I’ve met Megan before at a few of the mystery conferences. Although she’s a great panel member, she claims not to be as comfortable up on the stage as she appears. Who, I asked her, would be on her fantasy panel?

“True crime and how it works its way into one’s fiction. All of my novels have a true crime component. DARE MEwas inspired by a news story about a high school cheerleading coach. BURY ME DEEPwas based on the Winnie Ruth Judd case in Phoenix in the 1930s. Almost everything I write has some basis in true crime.”

Finally, I asked Megan what it was like to be a John and Renee Grisham Writer-in-Residence at the University of Mississippi. Her face lit up at the question.

“I loved it. Oxford is a writer’s paradise,” she said. “I love teaching writing and working with young writers there. Reading their work was really inspiring.”

Her best advice to writers just starting out? 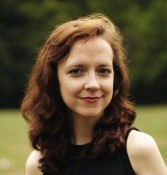 Megan Abbott is the Edgar Award-winning author of six previous novels. Her writing has appeared in the New York Times, Salon, the Los Angeles Times Magazine, The Believer, Los Angeles Review of Books, Detroit Noir and Queens Noir among other places. She received her PhD in literature from New York University. She lives in New York and recently served as the John Grisham Writer-in-Residence at the University of Mississippi. Currently, she is working on the screenplay for her novel, DARE ME, soon to be a major motion picture.

To learn more about Megan, please visit her website.