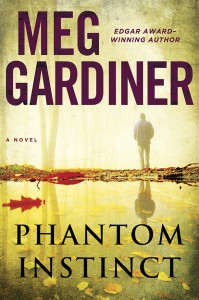 I’ve been a reader for as long as I can remember. I remember reading Nancy Drew and quickly moving on to the Hardy Boys because I craved more action. Mysteries filled the void for a while. Then I found thrillers, starting with David Morrell and Jon Land’s Blaine McCracken. Yes, I was getting action, but in my experience, most of the kicking ass was done by men. That is, until I discovered Meg Gardiner.

In my recent introduction to Meg’s stand-alone novels, RANSOM RIVER and SHADOW TRACER, I found what I consider true thriller, kick ass heroines: Rory Mackenzie and Sarah Keller. From there it was a small leap to follow Harper Flynn in PHANTOM INSTINCT, Gardiner’s latest release.

Gardiner opens PHANTOM INSTINCT with a shoot-out and deadly fire in a trendy nightclub. The bartender, Harper Flynn, tries to move her injured boyfriend, Drew, from the line of gunfire only to lose him to the devastation of the blaze that followed. A year later at a memorial service for Drew, she sees a figure watching from the shadows and wonders who it is and why they are there.

She is convinced it has something to do with the third gunman she saw, but since other survivor reports did not support her claim, the police are uninterested in pursuing what they believe is a figment of her imagination.

Believing she is on to something, Harper contacts Aiden Garrison, a policeman who was in the club on the night of the shooting. He too remembers there was a third gunman but due to a traumatic brain injury called Fregoli Syndrome or face blindness his recollections are deemed to be unreliable.

Together they delve into the case and soon Harper realizes her presence at the club that night was no accident. And her only hope of getting answers lie with Aiden, a man filled with mistrust and uncertainty as he doesn’t know if the enemy he sees is real or not.

According to Gardiner, PHANTOM INSTINCT was inspired by the following idea: “What if two people know that a killer escaped from a shootout, and that he will kill again, but nobody else believes them? To catch him they must work together, but they don’t trust each other.” In the story, she said, “the more Harper Flynn and Aiden Garrison learn about the shootout, the more dangerous things get. The more they’re drawn to each other. And the more each of them fears that the other might betray them.”

One of the key elements in PHANTOM INSTINCT is the fact that Aiden suffers from Fregoli Syndrome, a rare disorder. “It causes the mistaken belief that the person you’re looking at is actually somebody else in disguise. I ran across it while reading, and immediately wanted to write about a character who has the condition.” Gardiner explained, “I thought: what if a cop gets injured in the line of duty and develops this? What if he’s after a killer he only glimpsed briefly, but now at random moments, thinks he sees in disguise? Who could trust him? After all, he can no longer trust his own eyes. That’s Aiden Garrison.”

Writing PHANTOM INSTINCT was made a little trickier by the fact that Gardiner wrote it while commuting between London and Austin. It was an unexpected move back to the states and she said half of the book was typed on airplanes. Despite the stress of writing the book while moving, there was still some time for a little fun. “When I moved out of my English house, I spent the final day packing, cleaning, and emailing my editor from my phone, I was texting a message when my son’s girlfriend called to me: ‘Something’s wrong with the fridge.’ Great. I ran to the kitchen, yanked open the refrigerator door…and my son jumped out at me. He’s still laughing.”

With both a legal and writing background, Gardiner is familiar with researching for her stories. For PHANTOM INSTINCT she did more medical research than usual in learning about Fregoli Syndrome. Also, “learning how to pick locks means I might have a career as a cat burglar.”

A large portion of Meg’s success is due to her writing skills. I was impressed with her style, use of language, and sense of pacing, always a difficult task in any book but particularly in thrillers. Another feature I find refreshing is her use of humor. It works as a tension reliever and as a way to give her characters depth.

Her novels also reflect her dedication to the part that comes after getting the story down. According to Meg, there is no such thing as a good first draft “so don’t sweat the small stuff, just get it down. Then rewrite the hell out of your manuscript, as many times as it takes, until it shines so brightly you could see it from outer space.”

She also strives “to create characters who seem so real that readers forget they’re fictional. [For PHANTOM INSTINCT] I wanted to write a story that kept revving up, so that readers are pulled along and don’t want to put the book down. I wanted to write moments that would cause readers to shake their heads—with surprise, with grief, or with laughter. Creating a great story means giving readers an intense and satisfying experience.”

And that is why I am happy to have discovered Meg Gardiner.

Besides her skills as a writer, though, Gardiner can be cagey. When asked if she had any thoughts about her next novel (number thirteen), she replied: “I’m thinking of writing a thriller.” She loves Jo Beckett and Evan Delaney and said, “their stories are far from over. Keep prodding me.” As for Sarah Keller and Rory Mackenzie, she said, “We’ll see who shows up again.”

If you haven’t read Meg Gardiner, I urge you to give her a try. You can find out more about her and her novels on her website. You won’t be disappointed. 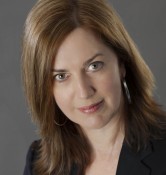 Meg Gardiner is the author of eleven critically acclaimed novels, including the Evan Delaney series, of which CHINA LAKE won the Edgar Award. Originally from Santa Barbara, she divides her time between Austin, Texas and London.