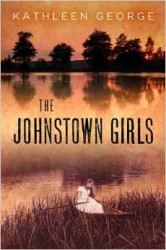 In her latest novel, THE JOHNSTOWN GIRLS, Kathleen George develops such an interesting plot that Author Stefannie Pitoff says, “George expertly pushes the boundaries of the mystery genre. I can’t wait for more superb novels to come.”  In her novel, a woman of 103 tells the story of what really happened to her family in the Johnstown Flood, causing a journalist to investigate.

Kathleen George is the author of TAKEN, FALLEN, AFTERIMAGE, THE ODDS (Edgar finalist for best novel), HIDEOUT, SIMPLE, and A MEASURE OF BLOOD.  She is also the editor of PITTSBURGH NOIR.   A professor of Theatre Arts at Pitt, George has directed many plays, including several by Shakespeare.  She credits her theatre background with giving her the tools to write thrillers.

I had the opportunity to catch up with Kathleen George the other day and ask her a few questions.

Is there anything special you’d like to tell us about THE JOHNSTOWN GIRLS?

Altogether it took twenty-five years to write! Yes.  I started it a long time ago and have several versions. To tell the truth, I liked the impulse behind all the versions, but this is the one that seems to have the most steam. It has an engine that moves.

How did you get interested in the Johnstown Flood?

I was born and raised in Johnstown.  We heard about the flood during those years, even though the Great Flood was too long ago for anyone to remember.  My mother and father remembered the 1936 flood which was very bad, but of course nothing can compare to the flood of 1889.  In that one over 2,000 people were killed in a matter of minutes.  And the town was wiped out.  Only to be rebuilt by determined survivors.  We learned in school that Johnstown was now the flood free city.   And of course that wasn’t true because there was another flood in 1977.  I experienced that one, or the aftermath of it rather, because I went into town during the disaster-area recovery.  But the novel is about women and their relationships.  I had to do research into memory, twins, teaching, nursing, all kinds of things to flesh out these lives.

I have a number of readings in the Pittsburgh and Johnstown areas.  The Press is sending out notices to other newspapers in other cities.  I hope for reviews in those places.

Actually I¹m torn between writing another Richard Christie procedural and another historical novel.  I think the inevitable answer is both, but I just don¹t know in which order.

When I¹m not writing I am teaching classes, grading papers, sitting on committees (which means I still have my day job of Professor of Theatre Arts at Pitt).  There isn¹t much other time.  When there is, I can be found reading, reading, and reading, which I love to do and watching sports, mainly baseball in season.  I’m a huge fan.  And cooking, making soup or Lebanese dishes.  I even baked Lebanese bread recently.

“Edgar-finalist George (The Odds and six other Richard Christie mysteries) successfully moves to period fiction with this evocative, historically themed whodunit, set in 1989, as the great Johnstown, Pa., flood approaches its centennial. Anticipating a spate of renewed attention, Pittsburgh Post-Gazette reporter Ben Bragdon visits Johnstown to interview 103-year-old Ellen Emerson, the flood’s last known survivor. Though Ellen’s family was lost in the flood, she has always believed that her twin sister, Mary, somehow survived. George interweaves Ellen’s story with that of Anna Hoffman, who is living in a nursing home in nearby Pittsburgh, along with Ben’s research into the flood and his ambitious young colleague Nina Collins’s pursuit of the missing twin. Ben is also trying to make a clean break from his estranged wife, Amanda, who continues to have feelings for him even as he begins a new relationship with Nina. George offers complex and rewarding storytelling that pays tribute to not only the magnitude of the disastrous flood but also the resilience of Johnstown and its citizens.”

Sounds great, Kathleen.  I look forward to reading it. 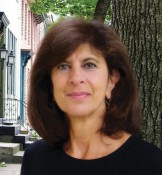 Kathleen George is the author of TAKEN, FALLEN, AFTERIMAGE, THE ODDS (Edgar finalist for best novel), HIDEOUT, SIMPLE, and A MEASURE OF BLOOD.