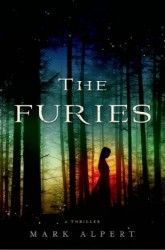 A down-and-out thug meets a mysterious woman, and he finds himself dragged into a war between a society of ancient witches and a rebellious faction of assassins. At stake is a genetic secret that could alter the course of human history. Alpert’s newest thriller blends science, fantasy, and action into a high-octane must read.

THE FURIES had an intricate plot with a lot of characters with competing agendas. How did you keep track of so many parts?

The novel has an unusually large number of characters because the extended family at the center of the plot—the Furies—has been multiplying for centuries. The family is very ancient indeed, dating back to the Neolithic era, and over the millennia the family’s leaders—all women—have used their accumulated wisdom to steer civilization in the right direction during times of crisis. Four hundred years ago, however, the family was nearly annihilated by the witch-hunters in Europe, who recognized that the clan was different because all their women had red hair and green eyes—the classic signs of a witch in pre-modern times. The survivors fled to America and found a hiding place in the wilderness of what is now Michigan’s Upper Peninsula. In the present day, almost two thousand Furies live in the hidden compound of the matriarchal clan, enough to populate a small town. They even have their own government and security force.

I thought it would be interesting to describe both the leaders and ordinary folks in this secret community, called Haven. And in any community this large, divisions are bound to emerge, which explains the competing agendas. But it wasn’t so difficult to keep track of all the moving parts because everything is described from the perspective of an outsider, John Rogers, the book’s narrator. John learns about the Furies in a step-by-step way; first he meets the mysterious Ariel in a Greenwich Village bar, then he and Ariel are nearly killed by the Fury named Sullivan and his band of sadistic rebels. Only later does John discover Haven and start to learn the family’s history and secrets.  Structuring the plot this way made it easier to tell the story without bewildering readers.

You presented an interesting blend of noir and fantasy. What brought you to these themes?

The fantasy comes from describing the unique culture and customs of the Furies, and the noir element comes from John Rogers, the narrator. I wanted the book to have a narrator who wouldn’t be completely paralyzed and freaked out by the murderous Furies he encounters, but I didn’t want to make him a cop or a soldier. So I made him a former gang member from North Philadelphia, someone who experienced the violence and brutality of that life and then renounced it. Because of his background, John is able to rescue Ariel after she’s attacked by the rebellious faction led by Sullivan. What’s more, he recognizes what’s going on—the war among the Furies is like the vicious gang wars in Philadelphia that he was involved in for so many years.  He understands Ariel’s desire to avoid the police and her refusal to go to the hospital to treat her injuries. So he brings her to Philadelphia and takes advantage of his old connections from the days when he ran with the Disciples. This part of the book was inspired by THIRD AND INDIANA, the great novel by Steve Lopez about the gang life in North Philadelphia.

I found it fascinating that a major component of your story dealt with the witch purges of Europe. I’m astounded that so many men went along with this horrific crime, after all these so-called witches included wives, lovers, mothers, sisters, and daughters. Plus the witch hunts precipitated the loss of much knowledge about herbal medicine and probably set back science almost as much as the destruction of the library at Alexandria (and the murder of another wise-woman, Hypatia.) Any more thoughts about this?

It’s truly a mystery why the witch-hunting hysteria swept across Europe in the fifteenth and sixteenth centuries. Witches and sorcery have long been a big part of European folklore, but there were no widespread massacres of witches during the Middle Ages. Some historians believe the religious wars of the 1500s—the Reformation and Counter-Reformation—may have triggered the social chaos and the desire to find scapegoats who could be blamed for all the troubles. Throughout European history, mobs have persecuted outsiders—Jews, heretics, and so on—because there were relatively few repercussions from killing them. And during the witch hunts, many of the first victims were also outsiders: the spinsters who had no family in the village, the hermits whom everyone feared and disliked. But the massacres went way beyond that; they became a kind of gender genocide. For example, in two villages near the German town of Trier the witch hunters left only one woman alive in each place. It seems absolutely insane. But so was the Holocaust. And the genocides in Armenia and Cambodia and Rwanda. The human race seems to suffer from periodic eruptions of mindless bloodlust. It’s happening right now in Syria and Myanmar and Nigeria and the Central African Republic.

You obviously love geeking out on research. Do you have an extensive home library? Besides your colleagues in SCIENTIFIC AMERICAN, are there any other go-to experts in your address book?

I devote a bookshelf to each thriller I write, cramming it with all the books and newspaper articles I read about the topic. But talking to experts is even better. For my last thriller EXTINCTION, which was about the merger of man and machine (and is now available in paperback), I talked with Geoffrey Ling, who heads DARPA’s program to build brain-controlled prostheses for soldiers with missing limbs.

For THE FURIES I went to a lecture given by Deborah Hyde, a British expert on all things supernatural.

After her talk I quizzed her about the persecution of witches in England’s Essex County during the 1640s. I used this information when writing the prologue of THE FURIES.

How do you come up with the “What if?” for a novel?

The most important consideration for me: Is the topic fascinating enough to keep me interested for the seven or eight months it will take to write the book? In the case of THE FURIES, the “What if?” question was “What if witches really did exist?” Because I’m a science journalist and a fairly down-to-earth guy, I didn’t want to write a novel about supernatural powers that defy the law of physics. I love the Harry Potter books, but I’m the kind of person who wonders, “How exactly do those Quidditch brooms work anyway?” I know I shouldn’t worry about this kind of thing—because it’s fiction! It doesn’t have to make sense! But it still bothers me. I started to ponder whether there could be a scientific explanation for witches, perhaps a mutated gene that was passed down from generation to generation. And then I wondered whether this inherited gene could give its possessors other characteristics besides red hair and green eyes. The more I thought about it, the more interesting the possibilities became, and that’s how I knew it was a good topic for a novel.

What’s your writing process? Pantser or outliner? How do you balance your writing with the demands of life? Does your background as a journalist help your creative writing?

I like to have an outline in mind before I start writing a novel, but it’s a very rough outline. I know where the book will start and where it will end and a few of the cool places I want to visit along the way, but I don’t know the exact route of the journey. I want to have enough freedom to go in interesting directions as they occur to me while I’m writing. I liken the process to driving from New York to Los Angeles in a thick fog. The things I want to describe don’t become clear to me until I get close to them.

Fortunately, I’ve earned enough money from my thrillers that I no longer have to hold down a day job. I’m still a contributing editor at SCIENTIFIC AMERICAN, occasionally submitting story ideas for the magazine and participating in some fun projects (for example, I was recently one of the judges in a contest to pick the best short story about quantum physics), but I don’t have to edit feature articles every month. So writing thrillers has become my full-time job, and I devote at least eight hours a day to it. My journalism background is useful because it taught me to respect deadlines. Also, many of the subjects I wrote about for SCIENTIFIC AMERICAN—high-energy physics, nuclear weapons, missile-defense systems, brain-computer interfaces, the origins of consciousness—have proved to be good subjects for science thrillers as well.

You started this creative writing gig in poetry and then moved into short story and now write novels. What motivated you to jump genres?

Writing poetry seemed very easy to do when I was a teenager and a college student. I lived and breathed poetry when I was a grad student in the creative-writing program at Columbia. But once I started working for newspapers I lost the knack for it, maybe because I was writing so much prose every day on deadline. I started writing fiction while I was a reporter for Fortune magazine, as an escape from the deadly dull business of business journalism. I sold a short story to Playboy, a comic piece called “My Life with Joanne Christiansen,” which is as far as I know the only Playboy story written exclusively in the future tense. But that sale turned out to be a fluke—despite many attempts I never sold another short story. In many ways a ten-page story can be harder to write than a three-hundred-page novel, and I quickly realized I didn’t have a talent for it. So I switched to novels.

You have authored four novels involving science and action. How do you keep the narrative from going stale? What happens if you find yourself repeating a scene?

It helps to experiment with different settings and different kinds of characters in each book. For example, part of the reason why I didn’t want to make John Rogers a soldier is that the hero of my last book, EXTINCTION, was a former Army Ranger. Whereas EXTINCTION was set mostly in China, most of the action in THE FURIES takes place in northern Michigan. I also focus on different kinds of science in each book. My first two thrillers, FINAL THEORY and THE OMEGA THEORY, were about Albert Einstein and theoretical physics; EXTINCTION was about neuroscience, and THE FURIES deals with genetics and biochemistry.

What books are in your To-Be-Read pile? Who are your favorite authors?

What’s next in your writing queue?

It’s another science thriller, but I’d rather not talk about it. Okay, I’ll give you a four-word teaser: “Space, the final frontier.” 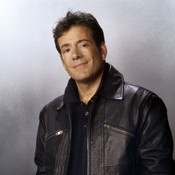 Mark Alpert is author of The Furies, a new thriller from Thomas Dunne Books/St. Martin’s Press. A contributing editor at Scientific American, he specializes in weaving real science into his novels. His earlier thrillers — Final Theory, The Omega Theory and Extinction — have been published in twenty-three languages. He lives in Manhattan with his wife and two children and is a proud member of Scientific American’s softball team, the Big Bangers.