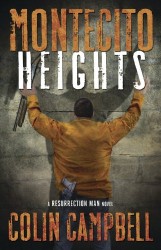 That swirl of disparate components came about “by one of those happy accidents that often define a story” Campbell said recently. The first Grant adventure, JAMAICA PLAIN, brought the British cop to the U.S. to interview a prisoner in Boston. After being drawn into a race against time to avert a catastrophe, Grant was asked to stay on in the U.S., officially employed by the Boston P.D. but actually working for an unnamed government agency.

Campbell never wanted that stay to be in one place.

“The idea was that he could be used across the U.S., because they could always disown him if he overstepped the mark. So, after Boston it was a case of, where do I send him next? Somewhere different to the East Coast/New England vibe. So, West Coast.”

Campbell had been to Los Angeles for Bouchercon, so L.A. seemed like a nice place for Grant to visit, or a bad place for the sake of story.

As you probably picked up, that’s a pretty good snapshot of the novel.

So how did a British soldier and thirty-year veteran of the British police force come to set his stories in the U.S.?

“That was a suggestion by my New York agent, Donna Bagdasarian,” Campbell explained. “My early books were about British crime and uniform police in the trenches. Front line policing at the sharp end. The first three, THROUGH THE RUINS OF MIDNIGHT, BALLAD OF THE ONE LEGGED MAN, and BLUE KNIGHT WHITE CROSS, were very much my tributes to the boys in blue. They were based on my experiences in the West Yorkshire Police and were pretty much factual, with names changed to protect the guilty and a few fictions thrown in. NORTHERN EX, veered towards thriller territory but was still set in the UK.”

In order to widen his appeal in America, his agent felt it would be a good idea to set the books here. “Initially I wasn’t keen. Certainly not writing an American character. Lee Child managed it by having Reacher grow up on military bases around the world so he was seeing America as an outsider. So I decided to create Jim Grant, a UK cop sent to America on a low priority matter and then having him stay.”

A real incident from his law enforcement career solved the fictional dilemma of getting a British policeman onto American soil.

In Campbell’s plainclothes days, he was sent across the Pennines mountains that divide Yorkshire from North West England. Police in Lancashire had a man in custody who had a tenuous connection to a Yorkshire crime.

“I had to interview him, record his denial, and because of the lack of evidence, eliminate him from our inquiry so the crime could be written off. That became Grant being sent to Boston on a similar errand before the shit hit the fan,” Campbell said.

Once that problem was solved to set up JAMAICA PLAIN, Campbell felt he needed to distinguish his hero from fellow Brit Lee Child’s Jack Reacher and a few other faces on the literary crime scene.

“I really like the Jack Reacher character, that wandering hero who shows up, saves the day, then moves on. I love westerns, so that nomadic gunslinger thing is strong for me. But Lee had already done that, so that was out.” 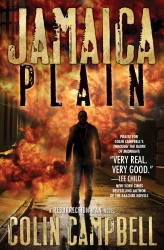 A cop on the job seemed too much like Michael Connelly’s work with Harry Bosch, and he didn’t want to mirror the witty and dry-humored Raylan Givens of Justified and the novel Raylan either.

“Copy Elmore Leonard, and I’m trampling the memory of possibly the greatest crime writer of all time. I wanted my character to still be a cop, because I can’t help still feeling like one, but to have the Reacher freedom of moving around the country, with my own sense of humor thrown in. So I went for a bit of each. Hopefully with enough differences that Grant can stand as his own man.”

While he sought to distance his hero from Lee Child’s, Campbell did get one bit of help from Child. That’s in naming Grant.

“Names in my UK books were often people I’d worked with. For the US books I wanted a good strong plain name. Like Ian Fleming did with James Bond,” Campbell said.

He didn’t realize Child was a pseudonym until he met Andrew Grant, Lee Child’s brother.  “I assumed they were half brothers and asked Lee about it. That’s when I learned his real name is James Grant. In my defense, I did ask if he minded me using it. You don’t want to piss off Jack Reacher,” Campbell said.

That small debt acknowledged, Campbell turns to more of his own police experience to fuel his plots and characters. “Grant’s police mindset I’ve come by after thirty years in the police,” Campbell said. “How cops feel about certain things. The corners we’d like to cut if the rules allowed.”

Grant as a fish out of water does things the way Campbell might if he were on the job in the U.S. “I work on the theory that Grant is an English cop so if I get anything wrong then Grant can make the same mistake.”

While there may be procedural differences and cultural differences, Campbell sees U.S. cops and British cops as very similar. On both sides of the Atlantic, there’s a goal of protecting the innocent and punishing the guilty, and the work breeds camaraderie, much like the military.

“There is always that bond between you and your mates. Same as in the army. You look out for each other’s backs,” he said.

Bureaucracy and challenges are similar as well.

“Shit rolls downhill and cops live in the valley,” he said. “If things go wrong people blame the police. They don’t appreciate the pressures in a live situation where you’ve got to make an instant decision that lawyers can spend months picking holes in. Main difference is, British patrol officers aren’t armed. I used to work my shift with a radio, a truncheon, and a set of handcuffs. Later we got CS spray, a side-handled baton and a stab vest. If somebody starts shooting then it’s call for the Armed Response Vehicle, a double-crewed car with firearms officers.”

Ironically, it’s unzipping a jacket during a live situation in JAMAICA PLAIN and holding his hands out to show he’s unarmed that gets Grant dubbed The Resurrection Man, since the pose resembles Christ on the cross. The publisher decided to use it as the tag for the Grant series, and a similar moment occurs in MONTECITO HEIGHTS.

Campbell hopes to keep the Resurrection Man busy for a while. He’s been keeping a few character details just a bit vague to avoid aging Grant too quickly. He’s now written Book Six in the series and has ideas for more.

In an interview, Lee Child asked Campbell about the temptation to spend his days watching DVDs, but that’s not the case. Even before he thought of the military or police work, he was writing, entering a contest in a James Bond magazine in his youth. That gave him the first real creative spark, and he credits his father with instilling him with a love for reading.

He reads a lot, as he suggests all writers should, and it’s often U.S. authors that catch his attention.

“ I love Joseph Wambaugh’s THE CHOIRBOYS, and that influenced my first crime novel, THROUGH THE RUINS OF MIDNIGHT. The fact that it’s about a group of uniform cops. The episodic nature of the stories, which in mine happen during a single night shift. The cop humor. “

As mentioned, he’s also a fan of Child’s Reacher, and he loves Elmore Leonard’s dialogue.

“George Pelecanos sounds like you’ve eavesdropped on his characters too,” Campbell said. “I like the American settings, probably down to watching too many Hollywood movies. It gives the books a sort of glamour that writing about Bradford (in West Yorkshire) doesn’t have. If you’d ever been to Bradford you’d understand. Lee Child called it a hardscrabble part of northern England. Again, I wouldn’t argue with Jack Reacher.”

Avoiding that temptation of too many movies, he writes in the mornings in a spare bedroom that’s become his office. He turned a cobwebbed attic where he used to write into a home theater, but movies come after work, and he writes in silence. If he played music it would be movie soundtracks, and that might get distracting or compel him to try and make characters sound like Michael Caine.

Averaging five to eight pages a day, he likes to plot in advance to keep things on track. “I tried doing the Stephen King thing once, go where the story takes me, and I got hopelessly lost. King is a genius, being able to keep all that information in his head and be confident enough to let it come out naturally.”

Since his first police procedurals were stand alones, he never saw himself writing a series, but he’s taken with Grant.

“I thought I’d get bored trying to find stories for him but nothing could be further from the truth. It’s like revisiting your favorite hero. I remember reading Ian Fleming’s James Bond novels and feeling a buzz whenever 007 was in the scene. I feel the same way about Reacher and Bosch. You’re glad to be back in their company. When I start another Resurrection Man book, I’m back with my mates.”

Since JAMAICA PLAIN got a lot of attention last year, Midnight Ink has committed to bringing out at least four Resurrection Man novels, and that’s a good thing. MONTECITO HEIGHTS is the second.

“The third, ADOBE FLATS, takes Grant to Texas and then we backtrack to SNAKE PASS in Yorkshire,” Campbell said. “Where the journey began, when a West Yorkshire policeman was relocated to America. Or to be more specific, when an ex-West Yorkshire cop relocated his writing to America. It’s been a great journey. Long may it continue.” 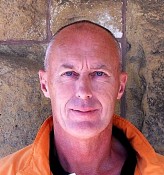 Ex-policeman. Ex-soldier. International tennis player. And full-time crime novelist. Colin Campbell is a retired police officer in West Yorkshire, having tackled crime in one of the UK’s busiest cities for 30 years. He is the author of UK crime novels, Blue Knight White Cross and Northern Ex, and US thriller Jamaica Plain. He counts Lee Child and Matt Hilton among his fans.