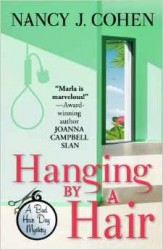 Nancy Cohen is an awarding winning author who writes in several different genres. Her latest book, HANGING BY A HAIR, the next in her Bad Hair Day mystery series, has just been released. What is HANGING BY A HAIR? Have a peek of the jacket description and then check out an exclusive interview with the author:

Marla’s joyous move to a new house with her husband, Detective Dalton Vail, is marred by their next-door neighbor who erects an illegal fence between their properties. When Dalton reminds the man of the local permitting laws, tempers flare—and worse, the neighbor is found dead the following day. Dismayed when Dalton is removed from the case due to a conflict of interest, Marla decides it’s up to her to find the killer. Can the intrepid hairstylist untangle the clues and pin down the culprit before he strikes again?

Give us the inside scoop into your latest book, HANGING BY A HAIR

Marla and Dalton Vail move into their new neighborhood and attend their first homeowner’s meeting, where her husband gets into an argument with the HOA President. Marla is a hairdresser and salon owner in Palm Haven, Florida, while her husband of three months is a homicide detective.

Who hasn’t disagreed with their HOA rules or their Board of Directors at some point? Unfortunately in Dalton’s case, the man is found dead the following day. The victim also happens to be their next-door neighbor.

How well do you know the people living on either side of you? Personal experiences work their way into my tales, and this one is no exception. Research took me down some fascinating paths as well. I learned about Native American burial sites, the Prepper movement, code enforcement, and more. And I got to spend a lovely beach weekend at Marco Island while researching a scene there.

HANGING BY A HAIR contains the humorous moments my readers have come to expect, while we follow Marla along on her adventures. As it turns out, her husband isn’t the only one who resents the HOA president. Many folks are happy to see him out of the way. When it appears his death isn’t a suicide as first indicated, Marla gets involved in solving the crime. Dalton has been removed from the case due to a conflict of interest, after a neighbor reported his disagreement with the victim. Now it’s up to Marla to restore his reputation and make her community safe again.

Who is Marla Vail?

Marla is a thirty-something hairdresser who solves crimes in between cutting and coloring her customers’ hair. She cares about people, which is why she gets involved in solving mysteries. Her relationships change and grow as her personality evolves throughout the series. But you can jump into any title without feeling adrift. Each story is self-contained, although Marla’s personal life changes as it does for all of us. That’s important in a series. You wouldn’t want a heroine to be static, or readers might lose interest in her. Marla’s relationships with her friends, colleagues, and family continue to develop. She’s a friend you’d want to have in real life.

Cozy mysteries are becoming extremely more mainstream, why do you think that is?

So many topics affect us on various levels, how can we not include them in our stories? HANGING BY A HAIR touches upon bigotry, for example. There’s nothing wrong with bringing serious social issues into our stories as long as we don’t disappoint reader expectations. And for a cozy, that means no graphic sex or violence. These books deal with relationships more than crime scenes or forensics. They may include humor, and they never involve killing off the family pet. But otherwise, anything in the news is fair game.

When writing a mystery, the author has to leave little clues for the reader so they can be a detective. How conscious do you need to be of this so the reader has a chance to solve the crime along with the character?

During the plotting process (which I describe in my nonfiction instructional guide, WRITING THE COZY MYSTERY), I decide which clues will be deployed to reveal the secrets leading to the killer. I read once that there should be three clues and the clincher. So the pieces are there if readers can figure them out. My job is to misdirect the reader so he doesn’t notice the clue or notes it but sweeps it aside as insignificant at the time.

What is next for Nancy Cohen?

I’ve finished PERIL BY PONYTAIL, book number twelve in my Bad Hair Day Mysteries. I have also published WRITING THE COZY MYSTERY, an instructional guide for writers on how to write a winning whodunit.

And WARRIOR LORD, book number three in my paranormal Drift Lords series, will be my next release. I’ll be speaking at Malice Domestic and Mystery Writers Key West Fest this year. And I’m currently serving as President of Florida Chapter of Mystery Writers of America. So that’s enough to keep me busy! 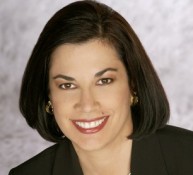 Nancy J. Cohen is an award-winning author of romance and mysteries. Her humorous Bad Hair Day mystery series features hairdresser Marla Vail, who solves crimes with wit and style under the sultry Florida sun. Several of these titles have made the IMBA bestseller list. Nancy’s imaginative romances have also proven popular with fans. Her titles in this genre have won the HOLT Medallion and Best Book in Romantic SciFi/Fantasy at The Romance Reviews. Nancy belongs to Mystery Writers of America, Sisters in Crime, Romance Writers of America, Novelists, Inc., and International Thriller Writers.