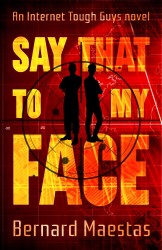 It is exciting to be on the ground floor of a brash new thriller series featuring the Internet Tough Guys. And that’s exactly what you get in Bernard Maestas’s debut novel, SAY THAT TO MY FACE.

SAY THAT TO MY FACE is the story of how two unlikely friends, Ted Reagan and Alex Kirwan, become international mercenaries and end up with their own business so they can pick and choose the jobs they want, when they want.

We first meet the friends when they are teenagers and follow them to young adulthood. Ted is a good-looking high school student who is a computer whiz. We soon learn that he does not always put these skills to good use.  Alex on the other hand is far more physical in his approach to the world and we learn the parkour expert spent three years with the French Foreign Legion.

Both young men have issues they are working out as they progress from teenage troublemakers to world-class mercenaries. The vignettes that make up SAY THAT TO MY FACE chronicle their journey, covering about five years.

Maestas admits he has an unusual writing style: He writes totally out of sequence.  But he says his editing process is more of what one would expect. He went through the novel from start to finish over and over.

Ted and Alex came to Maestas as a “natural and realistic divide between brains and brawn. And I definitely saw them as series characters from the very beginning.”

Asked what he likes and dislikes about Ted and Alex, Maestas said, “I honestly love both of these characters. They’re complex, but also funny, dynamic, heroic (when they feel like it), and extremely talented. If I had to pick something to love most about them, it would be their relationship. Without one another, they are just not the same at all.

“Dislikes are a lot harder to pin down. I suppose what I dislike about Ted is that he’s smarter than me and that challenges me when it comes to writing him. For Alex, I guess it’s trying to balance what a blunt instrument he is while still showing his intelligence.”

He enjoyed writing their humorous interactions and the action sequences the most in SAY THAT TO MY FACE. Hardest to write were Ted’s segments, partly Maestas said, because his knowledge of computer hacking is more limited than his character’s.

The Internet Tough Guys will make their second appearance in GODWIN’S LAW. Despite saying he could talk all day about the book, Maestas said it started with “this great idea based on some real life inspirations and it just developed so easily and smoothly from there.”

Maestas brings an eclectic background to his writing. He has experience as an actor, director, musician, screenwriter, comic book creator, martial arts plus his day job as a police officer.

“I made comics long before I could read or write and carried them into elementary school and junior high as an outlet…Comics were, and continue to be, a huge thing for me.

“Music has been a critical part of my entire life but I really got into it mid-high school, when, ha-ha, I became a rapper! I got turned onto heavy metal just as I was getting out of school and just as rap-metal was becoming a thing. I played in a number of bands after high school, but had to give it up for the sake of moving to Hawaii. For a long time I still thought I’d make it in music as a solo artist.

“Movies have been a huge deal for me throughout my life. I grew up in the golden age of action movies and they really shaped me as a storyteller. I was watching movies years before I could even think about writing.  I made some award-winning films as a child on my mom’s camcorder. I briefly considered a career in acting but am not good-looking enough, ha-ha!

“I stopped writing movies because there’s literally, like, a dozen people who write all the movies in the world and it’s an impossible thing to get into.”

When thinking about influences on his writing career, Maestas said, “It seems in every interview I give a shout out to this urban fantasy writer Rob Thurman who has no idea I’m alive. I simply love her books, especially the humor, which really speaks to me.

“In my formative years, I’d give credit to Orson Scott Card and his absolute masterpiece, ENDER’S GAME.  It’s one of the first novels I read that stuck with me and I consider it a flawless story. I’m also a huge sci-fi nerd, so that helps.”

Now Maestas fills his free time with writing. He has another thriller series, is in the midst of a “drastic” rewrite on his second novel, and the third installment in the Internet Tough Guys series is in the works—at least that’s all he’ll admit to.

The “leading candidates” for his next projects are a high fantasy novel and one that’s a blend of light sci-fi with hard military fiction. “My immediately current novel is a young adult/thriller project which, basically, is a superhero novel with a gritty, realistic twist. It’s …almost like what the graphic novel of ‘Kick-Ass’ would have been if it were reinvisioned as a ‘noir’ crime novel.”

As for Ted and Alex, Maestas says, “First and foremost, Internet Tough Guys is just getting started! There’s a very progressive tale to be told about Alex and Ted and it’s been described as fascinating. Love interests start popping up in GODWIN”S LAW and will continue to be important. That was something else I didn’t get to explore in SAY THAT TO MY FACE.”

Bernard Maestas lives in paradise. A police officer patrolling the mean streets of Hawaii, he has a background in contract security and military and civilian law enforcement. When not saving the world, one speeding ticket at a time, and not distracted by video games or the internet, he is usually hard at work on his next book.

You can learn more about SAY THAT TO MY FACE, Bernard Maestas and his work on his official Facebook Page.