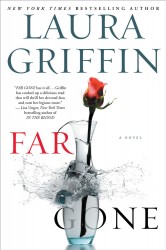 Karen Harper was glad she caught up with Laura Griffin, who is one of the busiest writers around.  It was a fun interview because both the interviewer and author write romantic suspense thrillers.  The questions cover all three of Laura’s series—each different, yet each with the Griffin stamp of realistic plots and characters, inspired by her years as a hard-hitting journalist and hands-on researcher.

What is your novel about?  Is it book one in a series or a stand-alone?

Thanks for inviting me to THE BIG THRILL!

FAR GONE is the story of police detective Andrea Finch, who is a rising star in her department until a split-second decision derails her career. She’s on leave from her job when she gets an urgent call from her younger brother. She’d prefer to ignore his latest plea for cash, but this time instinct tells her something is very wrong. Andrea’s search for answers takes her to a dusty Texas border town where she crosses paths with FBI agent Jon North, who is working undercover in west Texas investigating an unsolved murder that may be linked to a broader plot.

FAR GONE is a stand-alone novel with new lead characters, but readers of my Tracers series will recognize a few familiar faces.

Your heroine in FAR GONE is “disgraced and disillusioned.” Why did you decide to have her operating from a down-and-out experience early in the story?  Yet she obviously has a lot going for her.  What talents or weaknesses do you like to give Andrea and your other heroines?

Andrea is up against tough odds and has been most of her life. I like stories about people in difficult situations who have to use their instincts and intellect to find a way out. The crux of the problem in FAR GONE is that Andrea is torn between the people she loves and the job she loves. From her first scene in the book, she’s in a no-win situation, and as the story unfolds it keeps getting worse.

For Andrea, her talents and her weaknesses are two sides of the same coin. She’s a gifted cop, but her skill in that area brings her grief personally. Also she is stubborn and has a self-destructive streak, sometimes sabotaging her own happiness.

Your starred review in Publishers Weekly said this about FAR GONE:  “Bestseller Griffin…easily merges high-stakes action and spicy romance with rhythmic pacing and smartly economic prose.”  Do you have any advice for writers who are trying to balance romance and suspense?

My favorite thrillers are the ones that have a heart. It’s not all car chases and explosions, but some quieter moments too and some deep personal stakes that come out in the story. I love to combine the tension of a good mystery with the tension of a new (or sometimes old) romantic relationship and watch how the characters react.

It’s a no-brainer that your college degree and former career in journalism would help provide your dynamic writing style, but did that reporter background also help with your extensive hands-on research for your novels?

Starting out as a reporter helped me tremendously, in so many ways. I learned to become a scrapper, scrounging for that interesting gem to write about in a heap of mundane facts. How do you make people care about a city council meeting, for example? Or some stranger’s house that burned down in the middle of the night? My first news editor taught me not to bury the lead, that you must hook the reader right away.

Probably the most important thing I learned was not to be afraid to go out and interview people. Find people, contact them, go out and see things with your own eyes. The best stories, both in news and in fiction, are ones in which the writer makes you feel like you are right there in the middle of it.

Can you tell us a bit about your romantic suspense TRACERS series?  And is it a challenge to overlap characters, yet have a new lead hero and heroine in each book rather than having your leads headline each book as many series do?

The Tracers series is based on a high-tech forensics lab where an elite group of forensics experts, known as Tracers, help homicide cops solve their very toughest cases. I have loved writing the series because there’s so much variety. Each story focuses on a different forensic expert and different forensic techniques that are used to unravel the crime. Writing the series, I’ve interviewed all sorts of experts, toured crime labs, tromped around a body farm, visited police stations. It’s been fascinating learning about how investigators use technology and old-fashioned detective skills to uncover the truth.

I enjoy focusing on a different character for each book. It keeps things interesting.

Can you tell us a bit about working with co-author Allison Brennan for CRASH AND BURN?

Allison and I have been friends for years and always talked about writing a book together. When we started tossing around the idea of a female PI duo working in Southern California, I knew it was going to happen. Our characters, Scarlet Moreno and Krista Hart, are very different, and yet they are utterly committed to their partnership. The first Moreno & Hart book got a great reception, and we are now writing the second in the series. HIT AND RUN will be out in July.

Allison and I have different writing styles (the way we approach the work) but for some reason we really click. The planning and plotting have happened seamlessly. Whenever we start talking about the characters, the ideas seem to flow and there’s so much enthusiasm—which makes it fun.

What are you working on now and what will we see in the future from you?

I have plans to write more in the Tracers series, and also several stand-alones. Right now I’m writing a new Tracers book focused on characters who first met in SCORCHED. The hero is Derek Vaughn, a Navy SEAL, so it’s been quite an adventure researching SEALs and all that they do. That book will be out with Simon & Schuster in 2015. I don’t have a title yet, but I’ll keep you posted!

Is there anything you’d like to tell readers, especially those who may be new to your Tracers series?

People ask me all the time if it’s necessary to read the Tracers books in order, and it is not. As a reader, I’ve jumped into so many series right in the middle. In the Tracers series, the characters overlap from book to book, but each story focuses on a different hero/heroine and a different suspense plot, so readers can dive right in.

To learn more about Laura Griffin, please visit her website.