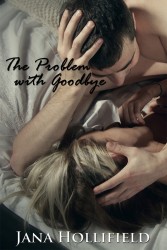 Here’s the description of THE PROBLEM WITH GOODBYE, the exciting new thriller from debut author Jana Hollifield:

Hiding from a mysterious stalker whose rage culminated in the brutal slaying of her sister, Cora Dalton believes there is no one she can trust. No one, until she meets Ryan McCabe, a handsome stranger who offers her help when she needs it most. But Cora knows the killer will never quit until he finds her and she must decide if she can allow Ryan to put himself in danger for her sake.

Ryan knows all about being alone in the world. Beautiful Cora is on her own and in trouble, and he can’t just walk away. But Ryan immediately senses there is something Cora is desperately trying to hide. As an intense attraction builds between them, Ryan seeks to gain Cora’s trust and unveil the truth before the killer strikes again.

Hollifield’s interest in writing was shelved over many years while she pursued her passion for painting. But despite a struggle with dyslexia that challenged her confidence, her desire to write ultimately became irresistible. THE PROBLEM WITH GOODBYE takes the classic murder mystery and injects it with healthy doses of romance, humor, and extrasensory perception for a unique romantic suspense experience.

Please tell us a little more about THE PROBLEM WITH GOODBYE.

THE PROBLEM WITH GOODBYE is a romantic suspense novel with a substantial mystery element, set in the beautiful city of Portland, Oregon. The story is written in first person narrative alternating between the female and male protagonists, Cora Dalton and Ryan McCabe. I like that this approach creates intimacy between the characters and the reader, and it also adds to the suspense by drawing the reader into unraveling the clues right alongside both of the lead characters.

Tell us about Cora Dalton.

Cora is your average young woman caught up in an extraordinary set of circumstances. She has been plagued for months by a mysterious stalker whose rage culminates in the murder of her sister. Cora is ill-equipped to deal alone with this increasingly dangerous situation but she trusts no one, including the Portland Police Bureau.  When she meets Ryan McCabe, Cora must decide between accepting the much-needed help he offers and allowing him to risk facing a vicious killer for her sake.

What can we expect from the antagonist in THE PROBLEM WITH GOODBYE?

The antagonist is not revealed until the end, but his actions drive the story. Cora is under constant threat from a killer hell-bent on taking her life, but discovering the identity of the elusive antagonist is a daunting task when multiple suspects are uncovered, including a member of the Portland Police Bureau.

What kind of research did you conduct for the book?

Since I live in northern California amongst the redwoods, I wanted the story to take place in the Pacific Northwest.  I’m familiar with Portland, but to describe it as if it were a secondary character in the book, a lot of research went into the city layout and history.  Additionally, Ryan McCabe’s best friend, Ollie O’Neill, is a Portland homicide detective, so delving into police procedures was yet another undertaking I took for the novel.

How has your dyslexia affected your reading/writing?

There is no cure for dyslexia, but you can develop techniques to help minimize the symptoms.  These days the understanding of dyslexia is changing, challenging the long-held belief that it is a learning and/or language disability.  The mind of a dyslexic simply processes information in a three-dimensional way, making some things more difficult, like the two-dimensional process of reading and writing.  But there are many strengths dyslexics seem to share: creativity, persistence, vivid imagination, superior intuition, and big picture thinking just to name a few.  All of these traits are highly beneficial if you’re an author, which is why there are more dyslexic creative writers than you might think.  For me, I experience things like reading somewhat slowly and getting into spelling jams even spellcheck at times can’t fathom.  But nothing will ever stifle the joy I feel when writing.

Presently, I am writing the sequel to THE PROBLEM WITH GOODBYE entitled THE PROBLEM WITH SECOND CHANCES, a more traditional mystery focusing on the Ryan McCabe character. When Ryan is drawn into helping an innocent man accused of murder, unresolved issues from the past threaten not only Ryan’s current relationship, but also his life.

Your title is very suggestive and intriguing, how did you come up with it?

THE PROBLEM WITH GOODBYE is reflective of the challenging relationship between the two protagonists, Cora and Ryan, but it also speaks to the loss of loved ones both of these characters experience.  When you love someone, any form of saying goodbye can be emotionally difficult to accept. 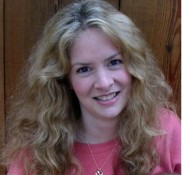 Born into a creative family of artists, Jana’s interest in writing was shelved over many years while she pursued her passion for painting. But despite a struggle with dyslexia that challenged her confidence, Jana’s desire to write ultimately became irresistible. Her debut novel, THE PROBLEM WITH GOODBYE, takes the classic murder mystery and injects it with healthy doses of romance, humor, and extrasensory perception for a unique romantic suspense experience.

To learn more about Jana, please visit her website.