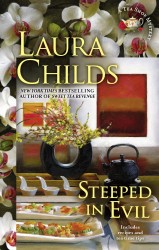 By my count, this is the fifteenth—count them fifteen—in the Tea Shop Mystery Series from Laura Childs, who also writes the Scrapbook Mystery Series and Cackleberry Club Mystery Series. In this newest entry, STEEPED IN EVIL, from the NEW YORK TIMES bestselling author, Indigo Tea Shop owner Theodosia Browning is about to learn the true meaning of terror…

Theodosia Browning has never considered herself a wine connoisseur—tea has always been her forte. But that doesn’t mean she’s going to pass up an invitation to a fancy wine-tasting party at the upscale Knighthall Winery, just outside of Charleston, South Carolina. But a sweet evening takes on a bitter aftertaste when a dead body is discovered in one of the wine barrels. It’s the son of the proprietor and Theodosia is soon swept up in the murder investigation. Could it be the ex-girlfriend, neighboring golf course owner, rival vintner, or angry step-mother? Take your pick, but beware! In between hosting a formal Downton Abbey tea and attending the Art Crawl Ball, Theodosia must deal with a raft of suspects. Still, it looks like a nasty killer might have her over a barrel until all is revealed and Theodosia endures a wild ride during a food truck chase!

“A climactic confrontation with the killer,” says PUBLISHERS WEEKLY, while ST. PAUL PIONEER PRESS lauds Childs as “a master at creating characters readers care about.” And SOUTHERN WRITERS MAGAZINE selected it a “Must Read.”

Childs is a writer with a special talent for writing cozy mysteries paced like thrillers. Recently, I caught up with her to ask a few questions:

You are amazingly prolific.  In your previous life, you were a Clio Award-winning advertising writer-producer and CEO of your own marketing firm.  What made you decide to make a career change and become a mystery writer?

After twenty-five years, I felt like I’d pretty much run the table on advertising and marketing and was ready for a new challenge.  All along I’d been writing screenplays, but was having trouble getting them sold.  Then I did my own marketing analysis and decided to switch to writing mysteries.  I didn’t sell my first two novels, but the third one hit the sweet spot!

You write three series, but the majority of your books are in the Tea Shop Mystery series.  Do you alternate between series, or do you write what piques your interest at the moment?  And how many books do you write in a year?

I’m like the Aztec calendar.  If it’s Spring I’m working on a Tea Shop Mystery, if it’s summer I switch to . . . well, you get the idea.  I write my mysteries one at a time so I can keep the characters and plot lines safely in my head.  Once I finish writing a book, I move on to the next one, even if it’s two o’clock in the afternoon.  By two-thirty, I’m fleshing out the next book.  And, yes, I do currently write three books a year.

Theodosia is such an interesting character.  What drew you to her character, and how much has she grown through fifteen books?

Theodosia doesn’t keep time like the rest of us.  Since three or four books take place over the course of one of her “years,” it’s only been about three years since she opened the Indigo Tea Shop.  Still she’s evolved.  She’s a little tougher about business, a little smarter about investigating.  I think Theodosia is the savvy businesswoman that lots of women want to be.  They don’t want to run a Fortune 500 company, but they do want to honcho a smaller, more creative business such as a tea shop, scrapbook store, or antique shop.  Oh, and Theodosia’s lost weight.  One reader called her “frumpy” in the first book—did I ever put her on a jogging regimen after that!

First off, there’s a tea plantation nearby, which is really sort of cool.  It dates back to around the Revolutionary War.  And Charleston is an old city, with lots of history, mystery, flamboyant characters, old money, skeletons in the closet, and a few slightly snooty traditions.  There’s a lot to work with there!  I should also mention that Charleston is haunted.  Nothing better than a city filled with glowing orbs, ancient cemeteries, and clanking ghosts.

The most challenging aspect has always been to create exciting openings, turning points, and big finishes.  Though my mysteries are classic cozies, I call them “thrillzies,” because they have the pace and internal architecture of a thriller.  The most rewarding aspect of writing this series has been all the letters of appreciation I’ve gotten.  I’ve received dozens and dozens of letters and emails from women who were going through terrible times (cancer, death of a husband, etc.) and they all thank me for giving them something to hold on to, to take their mind off their troubles.  That’s the best part.  It feels like a lot of responsibility, but it’s an honor, too.

What comes next?  Rumor has it you’re working on a new series.  When will we see it, and when can we expect the next Tea Shop Mystery?

I’m actually working on two new series.  One is the Hummingbird Inn Mystery series set in Carmel, CA.  That is also a classic cozy mystery.  The other is a hard-edged thriller set in the Twin Cities.  Where I’m going to find time to write these books I have no idea.  But the characters are in my head and just begging to be let out—kind of like people trapped inside an elevator!

In addition to writing, Laura Childs loves dogs, enjoys jumping horses, and travels frequently to Asia with her professor husband Dr. Bob. For more information on Childs and her upcoming books, please visit her website. Trust me, once you’ve read STEEPED IN EVIL, you’ll be looking for Child’s backlist!

Laura Childs is the New York Times bestselling author of the Tea Shop Mysteries, Scrapbook Mysteries, and Cackleberry Club Mysteries. She loves dogs, enjoys jumping horses, and travels frequently to Asia with her professor husband Dr. Bob. In her past life she was a Clio Award-winning advertising writer-producer and CEO of her own marketing firm.