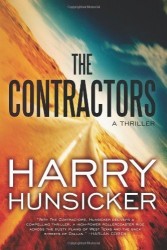 Harry Hunsicker made a name for himself as the author of the Lee Henry Oswald detective series a few years ago (note the middle name), but now he’s back with a new protagonist, a new series, and a whole new take on a controversial topic: private military contractors. THE CONTRACTORS, the first book in his new Jonathan Cantrell series, releases this month, and Hunsicker sat down with THE BIG THRILL to take new and returning readers behind the curtain of his latest thriller.

I’m the former executive vice president of the Mystery Writers of America. My fourth novel, THE CONTRACTORS, was published in February 2014. My work has been shortlisted for the Shamus and Thriller Awards. I live in Dallas.

Tell us about your new thriller, THE CONTRACTORS.

My new thriller imagines what would happen if private military contractors operated inside the borders of the United States.

The story is about two law enforcement contractors working as DEA agents who confiscate the wrong shipment of drugs and end up with the witness in a big cartel trial. Everybody wants the witness dead as well as whomever she’s been in contact with. In order to stay alive, the main character and his partner have to safely transport the witness across Texas to a courthouse in the Big Bend area.

This is your first standalone since your Lee Henry Oswald series a few years back. What was it like creating a whole new set of characters for the new book?

Daunting but refreshing. I had a great time creating the new characters.

What was your initial inspiration for THE CONTRACTORS? How did the story’s premise develop through the early days of your writing process?

I remember reading an article about the state prison system in Texas, how most of the facilities are run by private, for-profit companies. But the people who work there are licensed by the state as peace officers. So they wear uniforms and have state-issued badges, but get their paychecks from a private company. Then I did a little research and learned the Feds did much the same thing.

At the same time, I was struggling with a novel about a father who was suffering from cancer and dementia, and his relationship with his son. I turned the son into a law enforcement contractor and the plot came together pretty quickly after that.

What are some of the ways you’ve conducted research for this novel? Any interesting stories there?

Most of my research was on the Internet. I did talk to several people who worked or have worked for the Department of Justice and learned that private law enforcement contractors in this country do exist.

How much of yourself do you put in your characters? With which character in THE CONTRACTORS do you most identify?

I identify mostly with the main character, Jonathan Cantrell. Not because he’s the hero and manages to come out on top most of the time, but because he’s a smart ass and gets away with it.

I had the most fun with Jon Cantrell’s partner and love interest, Piper. She’s hot-looking, slightly crazy, and is not afraid of firepower.

It varies. I prefer to have an outline, not too detailed, just a rough idea of what the beginning, middle and end are going to be like. Maybe half the chapters in the book.

Sometimes I just know the ending. Other times, I have an opening and that’s about it.

Ouch! That’s a hard question. Probably MYSTIC RIVER by Dennis Lehane. That book has it all: the elements of a great thriller, really well-developed characters, excellent writing.

Frederic Forsyth. We’d talk about creating THE DAY OF THE JACKAL, one of the all-time greatest thrillers ever written.

When a scene comes together and the characters are in perfect conflict with each other, that’s the best feeling in the world.

I have no set schedule. I work when time allows. And I always wear a tuxedo while writing. (Okay, not that last part.)

Never ever give up.

The next (still untitled) Jonathan Cantrell thriller will be released sometime in 2015. You can learn more at my website, or by following me on Twitter.

While debate continues to rage about the legitimacy of private contractors in law enforcement, it seems like a no-brainer that THE CONTRACTORS will shed new light on the issue, entertaining and thrilling readers as it posits a plausible next step for the practice. Thanks to Harry Hunsicker for taking us inside his writing world, and be sure to check out THE CONTRACTORS when it debuts February 4th. 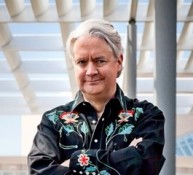 Harry Hunsicker is the former executive vice president of the Mystery Writers of America and the author of three previous novels, crime thrillers set in Texas. His debut, STILL RIVER, was nominated for a Shamus Award by the Private Eye Writers of America. His short fiction has been nominated for the Thriller Award by the International Thriller Writers and selected for inclusion in The Best American Mystery Stories of 2011. Hunsicker lives in Dallas, a fourth-generation native of the city.