The chess teams I knew played chess and were pretty boring – that is until I met up with Jeremy Robinson’s Chess Team. Boring is definitely not a word in their vocabulary.

This month marks the publication of the third novel in Jeremy’s Chess Team saga, Threshold. And if it meets the author’s own criteria of raising the thrill level in each subsequent novel, then we are in for a treat.

The Chess Team made its debut in Pulse. It’s a rip-roaring adventure that ties genetic engineering with the myth of the many-headed monster Hydra and the ancient hero Hercules. Pulse was followed by Instinct where the team is tasked to protect a scientist who needs to find the source (and the cure) for a weaponized strain of a genetic disease that strikes without warning. The solution is tied to an ancient secret found in the wilds of Viet Nam.

And now we have Threshold.

Jack Sigler, call sign King, and his team, Queen, Knight, Bishop, and Rook, face an array of monsters – modern and ancient – as they seek the source behind the worldwide extermination of those who speak ancient languages. The battle is far more personal this time and at its heart is about family – Jack’s family.

The idea for Threshold was conceived as part of a three-book deal. According to Jeremy, he knew Threshold would be the third story. Interestingly he envisioned Instinct as the first.

What most excited Jeremy about Threshold was the opportunity to return to his “storytelling roots by including elements from the Tower of Babel story.” Plus, he said, “We get to meet King’s family so we have a lot more character development.”

His storytelling roots is what he calls “Biblical speculation” – where he takes stories in the Bible and uses them to fuel thrillers. “I love wildly creative creatures and mythology,” he said. But this love also represents one of the most difficult aspects of his work. “I push the boundaries of science and had to do some intense research into science and history to keep this story in the realm of science thriller and not fantasy,” he explained.

Jeremy does a great deal of research before he starts writing but continues that research while writing. “In some ways I’m discovering things as the same time as my characters. For me, the only way to know I’ve done enough research is when things actually make sense. If the science can be understood enough that suspension of disbelief isn’t a challenge, that’s as far as I need it to go.”

The creation of Threshold took about four months with another two for rewrites and edits. And, Jeremy said, it was the hardest of the Chess Team novels to write. It had “more to do with the complex plot and science and less to do with the characters. In fact, I’ve held so much character development in reserve that I really enjoyed the characters in this book and had a much easier time writing them.”

This character development also helps to raise the intensity level. “It’s not just the challenge they face that makes things more intense. We’re closer to the characters now. Their lives mean more to us. And in Threshold we have some strong family story arcs for King that really up the ante.”

The ante will be raised again through probably another three Chess Team books. Jeremy thinks six is a good number. “In book six, which I’ve started to work out, we would see the larger plot started in Pulse and continued in Threshold come to an end.” He adds, “I’m not a fan of series that run forever. Sooner or later they become cookie cutter copies of the previous books.”

The fourth and fifth Chess Team novels, The Ragnarok Agenda and The Tesla Effect, are worked out and ready to write. Next up from his publisher though are two stand alone novels, Secondworld and Island 731.

When writing Jeremy finds he is more likely to live his story as it unfolds and finds the tension or levity of what he writes in a day affects his mood. “I seem to really feel the intensity of my stories. And I do think this comes from my background as an artist who not only visually “sees” what’s in my imagination, but is also open to the emotion those images convey.”

He has also found his background writing screenplays has also affected his writing. He feels it taught him how to stay focused and finish each project. But he says, the focus on sight and sound only has made it “very challenging to expand into the other senses as well as what a character thinks –which is NEVER part of a screenplay, where internal thoughts are displayed through visible action.”

Jeremy usually writes for four hours every afternoon, using the morning for promotional and administrative type work. He reports he has no writing rituals but between chapters you’ll find he plays a few rounds of a video game (currently Battlefield Bad Company 2) to cleanse his mental palette.

His office is multipurpose, no surprise there, and big. His writing desk is a 12-foot long conference table that is inevitably covered with research, notes, and books. There is a second computer station for friends who cover over to game and art table where he does his illustrations. You’ll also find video equipment, a treadmill, television, Wii, and a futon. Toy collections from his childhood and bookcases surround his space.

Speaking of games, check out Rooked – it’s the game Jeremy created based on the character Rook from the Chess Team books – at www.jeremyrobinsononline.com/rooked.html and it’s free! And those of you with smart phones, scan the small black and white square on the cover of the latest Chess Team adventure and visit the exciting world of Threshold. 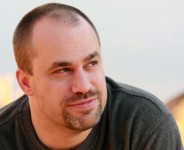 Jeremy Robinson is the author of seven thrillers, including Pulse, and Instinct the first two Jack Sigler thrillers. His novels have been translated into eight languages. He is the chairman and founder of New Hampshire AuthorFest, a non-profit organization promoting and supporting literacy in New Hampshire, where he lives with his wife and three children.

For more information, iPhone apps, iPhone games inspired by the novels, free podcast novels, video content, news, and contests, visit his website where you can connect with Robinson via Twitter, Facebook, Myspace or e-mail.