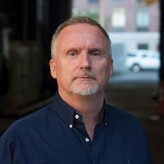 Tim O’Mara is best known for his Raymond Donne mysteries about an ex-cop who now teaches in the same Williamsburg, Brooklyn, neighborhood he once policed: Sacrifice Fly (2012), Crooked Numbers (2013), Dead Red (2015), Nasty Cutter (2017), published by Minotaur Books (#1–#3) and Severn House (#4). O’Mara’s short story The Tip is featured in the 2016 anthology Unloaded: Crime Writers Writing Without Guns, and his novellas Smoked and Jammed appear in 2016 and 2018 crime trilogies from Down & Out Books. O’Mara taught special education for 30 years in the public middle schools of New York City, where he now teaches adult writers and still lives. In addition to writing his next Raymond novel, The Hook, and the stand-alone high-school-based crime drama, So Close to Me, O’Mara recently finished curating the short-story anthology, Down to the River, to benefit the non-profit American Rivers. Visit Tim at: www.timomara.net

By Tim O’Mara TRUST ME, author Richard Santos’s debut novel, could have been, as they say on TV, ripped from today’s hea…

By Tim O’Mara According to author Beau Johnson, “Darkness is an attribute most of us rally against. It can consume. It c…

By Tim O’Mara In David Healey’s new thriller, DEADLY ANTHEM, the Star-Spangled Banner flag is stolen from the Smithsonia…

By Tim O’Mara In the opening scene of Steven Max Russo’s new thriller, THE DEAD DON’T SLEEP, we meet Frank, a Vietnam ve…

Navigating the Dark Web By Tim O’Mara As my big brother (pun unintended, but you have to wait for it) used to tell me wh…

By Tim O’Mara Lisa Towles, award-winning author of Choke, ventures into what for many readers will be familiar territory…

By Tim O’Mara So, Quentin Tarantino and Patricia Highsmith walk into a bar. They hit it off, play a little pool, s…

By Tim O’Mara When asked to do an interview for The Big Thrill, I always say yes. Typically, I get a copy of the book, f…

By Tim O’Mara In his new thriller, LAST YEAR’S MAN, Paul D. Brazill introduces us to Tommy Bennett, an aging hitman who …

By Tim O´Mara I had just finished WRATH by Thomas Lowe, checked out his website, and did some research. We’d decided via…

In something new for THE BIG THRILL, Barry-nominated author Tim O’Mara, a special education teacher in New York pu…

By Tim O’Mara “All right,” I said as we both settled into a new booth a few moments after the waiter spilled milk on the…