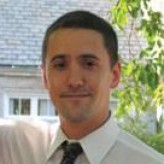 Nate Kenyon's latest novel is the techno-thriller Day One, released on Oct. 1, about the day machines become sentient and take over New York (St. Martins Press). It received a starred Booklist review and was recently optioned for film. Kenyon is a three-time Bram Stoker Award finalist, P&E Horror Novel of the Year Award winner, and author of Bloodstone, The Reach, The Bone Factory, Sparrow Rock, Prime, Starcraft Ghost: Spectres and Diablo: The Order. The Reach and Sparrow Rock have also been optioned for film. His latest work is the upcoming Diablo: Storm of Light, due in February 2014 from Simon and Schuster. Nate lives in the Boston area, where he is at work on his next novel. Visit Nate at: www.natekenyon.com.

By Nate Kenyon Patrick Lee burst onto the thriller scene in 2009 with his explosive bestseller THE BREACH, which was bil…

By Nate Kenyon The author of more than forty novels, Stuart Woods has been penning thrillers for over thirty years. The …

By Nate Kenyon Gregg Loomis has been publishing for more than twenty years, with over half a million copies of his books…

By Nate Kenyon Eric Van Lustbader has had a long and successful career in publishing, with over 25 bestsellers under his…

By Nate Kenyon Marooned in a desolate canyon half a planet from home, a lone survivor struggles to separate reality from…

By Nate Kenyon Megan is a suburban soccer mom who once upon a time walked on the wild side. Now she’s got two kids…

By Nate Kenyon Ever feel like someone’s watching you? Me, too. But lately it’s been happening in my room. Wh…

by Nate Kenyon As Amanda Kyle Williams will freely admit, struggling writers do a lot of things to pay the bills while w…

By Nate Kenyon I recently had an opportunity to sit down with Walter Greatshell to discuss his latest thriller, his writ…

By Nate Kenyon Recently I sat down with Alan Dershowitz to talk about his new novel, The Trials of Zion. First of all, t…

By Nate Kenyon Bestselling thriller author Steve Alten has his own remarkable personal journey to tell. Signed to a firs…