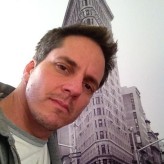 John Clement is the author of the popular Dixie Hemingway Mystery Series created by his mother, Blaize Clement (1932-2011), and published by St. Martin’s/Minotaur. The latest two books in the series, The Cat Sitter’s Cradle and The Cat Sitter’s Nine Lives, received unanimous praise from fans and critics alike, and The Cat Sitter’s Whiskers will hit the shelves March, 2015. John divides his time between Siesta Key, Florida, where the series takes place, and New York City, where he’s currently working on the eleventh mystery while his pup snores at his feet under the desk. Join the mailing list at DixieHemingway.com or follow on Twitter @johnclement.

By John Clement Hollie Overton grew up in a tiny Texas town with a population that hovered just under 20,000. Painfully …

By John Clement Gordon McAlpine’s latest novel, WOMAN WITH A BLUE PENCIL (Seventh Street Books, 2015), is an engaging an…

By John Clement LADLE TO THE GRAVE is the fourth installment in the Soup Lover’s Mystery Series by Connie Archer.  The b…

By John Clement Being the resident “cozy-ologist” here at THE BIG THRILL, I’m accustomed to talking with writers of cozy…

By John Clement I spent an inordinate amount of time in front of the television in my so-called “formative years,” and t…

By John Clement In preparation for this piece, I sent Leslie Budewitz, author of the Food Lovers’ Village Mystery series…