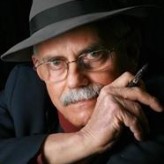 Gary Kriss’s THE ZODIAC DECEPTION, about a con artist who having learned the art of illusion from Houdini is recruited by the OSS to use his skills for the ultimate deception: infiltrate the Nazi Occult Bureau and persuade Himmler to plot the assassination of Hitler, and its prequel, THE HOUDINI KILLER, will be published by TOR/Forge in 2014 and 2015 respectively. A writer for longer than he cares to remember, including a respectable stint with THE NEW YORK TIMES, Kriss now exists solely to make his lovely wife, Pat, his publisher, his editor, his agents, his dog and his cat proud of him. He still holds out hope that he can win over the dog. Visit Gary at: www.garykriss.com

By Gary Kriss Ladies and Gentlemen and Writers of all Genres and Persuasions. Prepare yourselves to partake in an amazin…

By Gary Kriss Harry Dolan hasn’t killed anybody in well over two years. Now he’s about to make up for lost time. “I’ve b…

By Gary Kriss SPOILER ALERT! What follows reveals the “who done it” for Joseph Badal’s THE LONE WOLF AGENDA, so you have…

By Gary Kriss It’s what some might call an “improbable pairing.” She’s a self-described “hopeless nerd, science geek, hi…

By Gary Kriss Saturday morning at Starbucks had become a ritual for her, one she hoped to break. A cinnamon dolce latte,…

By Gary Kriss When the day finally comes that the pen slips forever from his hand, Jeffrey J. Mariotte says he wants onl…

By Gary Kriss Lee Weeks has been a cocktail waitress, a nightclub hostess, an au pair, a disc jockey, an English teacher…

By Gary Kriss Spring fever, coupled with a full moon, arrives in tiny Park County, Tennessee. It induces the well-named …

By Gary Kriss Piero Degli Antoni’s bucket list would barely fill a thimble. It has only three items, less if you don’t c…

By Gary Kriss Sandra Parshall, whose new book, BLEEDING THROUGH (Poisoned Pen Press), will be released on September 4, i…

By Gary Kriss HURAKAN by Michael F. Stewart is definitely a novel designed to tug at the heart strings of innocent young…

By Gary Kriss Dear Dr. Phil: Please help me! I’m desperate! No matter how hard I try I can’t break my addiction to a sol…

By Gary Kriss Pssst! Hey—come here for a minute. This is gonna be a little personal, but don’t be embarrassed: we’ve all…

By Gary Kriss OK, here’s the question: whadda you get when you mix together a death by cattle stampede, a three-shot sui…

By Gary Kriss First, I’m going to let J. Sydney Jones use his own words to give you the nitty-gritty about his just-publ…

By Gary Kriss If silence is indeed golden, attorney R. J. Jagger may be one of the world’s richest men. And while lawyer…

By Gary Kriss Half-Past Dawn on September 29. That’s when, despite all efforts to head it off, fate catches up with The …

by Gary Kriss Meet Sidney Williams. You probably already know him—or someone like him. Maybe from a Rotary meeting or a …

by Gary Kriss So there I was, ogling Lady Gaga’s left upper arm and thinking about James Barney. Yes, that James Barney,…

By Gary Kriss Richard Doetsch spent most of his adult life selling buildings. Then he started breaking into them. Not ju…