Detective “Doc” Wiley, an ex-Army Ranger medic, a veteran of Vietnam and the Nassau County Homicide Squad, no longer knows what he wants, only that what he has falls short. Madeline Maclear, director of nursing at an area hospital, is a widow whose husband was a troubled Vietnam vet. She is trying to reassemble her life. The two rudderless individuals are thrown together when Carl, an untraceable expert assassin with a private arsenal, a fortune in cash, and a perverse sense of humor, returns to Long Island in the spring of 1999. Six former flower children that have all but forgotten an adolescent episode on the road to Woodstock in 1969 are scheduled for lethal vengeance.

Carl’s targets begin to die in rapid succession, along with investigators who accidentally trigger bombs at the crime scenes. Peace symbols branded into certain victims suggest a relationship, but no one can fathom what that relationship is. Doc’s eclectic investigative team plays a frantic game of catch-up, encountering colorful characters and chilling traps along the way. Public hysteria and political recriminations emanate from the case like shrapnel from the killer’s explosives. Only the victims glimpse the twisted reasoning behind Carl’s mission of mayhem. When one corpse turns out to be the buyer of Madeline’s former home, the trail leads to the nursing director…

The Big Thrill caught up to author James D. Robertson and took some time to discuss his latest historical thriller, THE WOODSTOCK MURDERS. Here’s what he had to say:

The real homicide detective I had reading the chapters as I wrote them, to guide me on proper police procedure, told me I had thought of everything to cover my killer’s tracks. “We’d never catch this guy,” he said.

I found that planning a series of murders without my villain giving himself away too early takes a lot of thought.

I like the pace of a thriller and the challenge to think ahead of the author to try and resolve the obstacles thrown in the protagonist’s path.

Plot. An article I read about serial killers, and how they are often never suspected by people close to them, got me thinking about the possibility of offending one without ever being aware and what the consequences of that might be. Woodstock was known as the weekend of peace and love. What if there was some minor altercation and one of those involved was a latent psychopath? I had a premise; the rest grew from there.

James D. Robertson first displayed a talent for fiction in high school. An English exam required a report on a novel he found too dull to read. Rather than stare into space for the test period, James wrote about a story he invented on the spot. When the graded papers were returned, James was shocked to see a B-plus at the top and See me after class! in bright red ink at the bottom.

The teacher privately explained: while James had obviously not read the book, his characters and plotline were so well crafted he felt James deserved a passing grade. The teacher said, “There are two things you must do in life, Jim. First, go to college. Second, write a book. You have a rare gift.” The praise preceded a warning never to try this again.

Since then, James has held many positions in the business arena, but writing always played a part. In the course of his several careers, he wrote sales proposals, literature copy, an occasional cartoon, a newsletter for a Fortune 500 company and, in his spare time, did some freelance newspaper reporting. He was a contributing editor for two non-fiction works, Doc: Platoon Medic, a Military Book Club selection by Daniel Evans Jr. and Chuck Sasser (Pocket Books, 1992), and Steel My Soldiers’ Hearts, a New York Times bestseller by Colonel David H. Hackworth and Eilhys England (Ruggedland Books, 2002). James served with the authors in Vietnam. He is a decorated combat veteran.

James is a member of the Mystery Writers of America, International Thriller Writers and Long Island Writers’ Guild.

Mr. Robertson’s debut novel, For Good Reason, was released by Black Opal Books in September of 2018. THE WOODSTOCK MURDERS is his second novel. James lives with his wife, Elizabeth, on Long Island, where he is working on his next novel. To learn more, please visit his website. 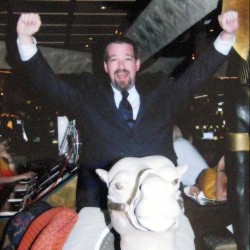 Latest posts by ITWAdmin (see all)
0
No Comments Yet