It can be impossible to ever know the full truth about a crime. Eyewitnesses don’t have perfect recall, and fingerprints and DNA evidence aren’t the magical solutions that shows like CSI would have you believe.

But how far would you go, and how much would you risk, to seek out justice and prevent future victims from being murdered—without locking up the wrong person?

That tension is at the heart of the new novel by Hilary Davidson, ONE SMALL SACRIFICE, told from alternating points of view: the detective and the suspect.

Davidson has won the Derringer, Crimespree and Spinetingler awards along with two Anthony’s. Impressive—though she didn’t start out writing fiction.

She began her writing career as a journalist, publishing 18 travel books. That background gave her a bit in common with the other point-of-view character in her latest thriller: Alex Traynor, a wartime photojournalist suffering from PTSD.

The Big Thrill caught up with her in the middle of her book tour for her new publisher, Thomas and Mercer, to ask her about the debut of her latest character.

What inspired you to tell this story from two alternating points of view?

I wrote my first three novels from the point of view of a single character, Lily Moore. That style worked for those books, but the most interesting aspect of crime stories, to me, is the psychology underpinning why people do the things they do, whether good or bad.

When I started writing ONE SMALL SACRIFICE, I wanted to explore the world of the main suspect, Alex Traynor, who’s spent years photographing war zones and is traumatized by what he’s seen and experienced. But I realized that the perspective of the lead investigator on the case, NYPD Detective Sheryn Sterling, was just as complex, because she’s obsessed with Alex and convinced that he evaded justice in a prior case. When you write in the first person, it’s easy for the reader to have sympathy for your main character.

PTSD is a major part of this novel. How did your own experience, and the stories of combat journalists, color your approach to this novel?

My first job out of college was at a government office in Toronto, and a man with a grudge came in one November morning determined to kill everyone who worked there. He set a fire that destroyed three stories of the building.

We were on the seventh floor and—miraculously—everyone got out alive, but some people were injured badly.

Afterwards, I started having disturbing thoughts in public, wondering if a stranger was about to attack me. I had nightmares and insomnia. The experience definitely became a big part of this novel.

I also read a lot about journalists who covered conflict zones, and that added another layer to it. One story that I encountered was that of Kevin Carter, a photojournalist who committed suicide just months after he’d won the Pulitzer Prize. He was tormented by what he’d seen, and it wasn’t a stretch to imagine Alex Traynor as similarly haunted.

A big part of mysteries is a hero trying to get at the truth so justice can be served. Yet most cases don’t have rock-solid evidence, eyewitness accounts are unreliable and murders go unsolved. How do your characters—and novels—try to address that impossible tension between absolute certainty and perfect justice?

That’s a perfect question for this book, because a year before the story begins, a female friend of Alex’s died in a fall from the roof of his building. Her death was investigated by the police and ruled a misadventure, because there was no conclusive evidence of a crime.

But it was deeply suspicious, and the reader is left with this disturbing question about Alex: did he harm his friend?

Sheryn is convinced that he did, but she doesn’t think that Alex himself knows what he did; she’s had her own experience with PTSD because of a family member and she’s aware that it can make an otherwise good person act in ways they wouldn’t consciously choose to.

That tension is really at the heart of the book. None of my characters are entirely good or bad. All of them exist in a gray area, and while the reader gets answers and a certain amount of closure in the book, there’s also an acknowledgment that justice is never perfectly measured.

What are the biggest differences between journalism, travel writing and fiction? And why were you inspired to make that switch, since you were already successful doing journalism and travel books?

As a journalist, I used to travel constantly and talk to experts for my articles and books. Writing fiction is much more solitary, though it still involves research and talking to sources.

The ironic thing is that I’m now able to tell some of the dark stories I picked up on the road as a travel writer, stories I was never allowed to mention in my articles. The unwritten rule of the travel magazine is that the stories are happy stories. It was the ability to tell these darker stories that drew me into writing fiction.

For example, when I went to Machu Picchu, I learned that people die there every year, but that is not a fact that went into any of the travel articles I wrote. It did, however, serve as a basis for one of my earlier novels.

Since you started, how has the business of writing changed: how you write, how you work with publishers, how you do media and book tours?

I just finished my book tour for ONE SMALL SACRIFICE, and I’m delighted to say that I visited some stores that I’ve been touring at for years, including the Poisoned Pen in Scottsdale, Murder by the Book in Houston, the Tattered Cover in Denver, the Mysterious Bookshop in NYC, and Ben McNally Books in Toronto.

To visit those stores is like seeing old friends, and it’s such a great experience.

I can’t say that my writing process has changed much over the course of five novels, except that my new publisher, Thomas & Mercer, does a developmental edit of their books—a process that takes about two and a half months—and it was such an amazing experience for me. I’d never really been edited before, and I loved it.

What are your future plans for this series?

I’m in the middle of the developmental edit for my second book in the series, Don’t Look Down, which will be out early in 2020.

I can tell you that Sheryn Sterling will be back, investigating a new case in which a blackmail case turns fatal.

The wonderful thing about the structure of the series is that each book can be like a standalone, but with a few familiar faces in it. It gives me a lot of space, creatively speaking.

Hilary Davidson has won two Anthony Awards as well as the Derringer, Spinetingler, and Crimespree awards. She is the author of the Lily Moore series—which includes The Damage Done, The Next One to Fall, and Evil in All Its Disguises—and the standalone thriller Blood Always Tells. Her next novel, ONE SMALL SACRIFICE, will be published in May 2019 by Thomas & Mercer. A Toronto-born journalist and the author of 18 nonfiction books, she has lived in New York City since October 2001.

To learn more about Hilary and her work, please visit her website. 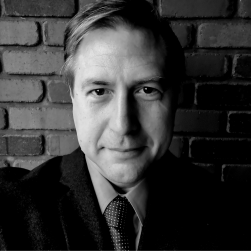 Latest posts by Guy Bergstrom (see all)
0
No Comments Yet