Murder at the 42nd Street Library is Con Lehane’s first book in an irresistible new series that introduces librarian and amateur sleuth Raymond Ambler, a doggedly curious fellow who uncovers murderous secrets hidden behind the majestic marble façade of New York City’s landmark 42nd Street Library. The story opens with a murder in a second-floor office of the iconic, beaux-arts flagship of the New York Public Library. Ambler, the curator of the library’s crime fiction collection, joins forces with NYPD homicide detective Mike Cosgrove in hopes of bringing a murderer to justice.  So we had to ask . . .

Libraries have always been special places for writers, but what inspired you to set a mystery in New York’s landmark 42nd Street Library?

On my web page is a short piece I wrote for Mystery Readers Journal called “On Becoming a (Fictional) Librarian.” In it, I describe my first visit to the New York Public Library. Scholar that I am, I went there to meet a girl, a lovely girl, whom I still remember. This isn’t the conscious reason I chose the 42nd Street Library as the setting and a librarian—actually, a curator—as my detective. I believe the idea was buried in my consciousness, waiting for the right time. The right time came when my publisher decided not to continue my Bartender Brian McNulty series. My editor, Marcia Markland, at Thomas Dunne Books suggested the 42nd Street Library as a setting and a librarian as a character. The rest was up to me.

We often think of amateur sleuths as falling into the “cozy” ranks of mystery writing, while you tend to add a bit of grit to your storytelling. Where does Murder at the 42nd Street Library lie on the scale from cozy to hard-boiled. And does it matter?

I’m not much of an analyzer of where I am on the crime fiction spectrum. I hold an MFA in fiction writing and at one time thought I was a literary writer (though I have no idea what one of those is either). I became a mystery writer—and a mystery reader—late in life, first as a fan of The Maltese Falcon, because of the movie. I finally read all of Hammett’s books in a row after that. A while later, I was working on a construction crew, building a bar in Hartford, Connecticut, where I would tend bar. I mentioned Hammett to one of the carpenters, who told me Raymond Chandler (whom I’d never heard of) was better, so I read The Big Sleep and then all of Chandler’s books one after the other. A year or two later, I discovered Ross Macdonald, and read … well, you get the picture. Those were my influences. I found many others since then. I’d say (with great trepidation) that I’m closest to Ross Macdonald in sensibility, though I wouldn’t say it out loud. However, my first book, Beware the Solitary Drinker, was first published in France by Rivages/Noir, so I was first categorized as a noir writer. I had to look that up, too, to find out what one was … and was pretty quickly disabused of the notion that I was a noir writer (though I love Jim Thompson, David Goodis, and most of the other noir writers) when I sat on a panel with Eddie Muller soon after my U.S. publication.

You have said that you spent more time in bars than libraries as you were a bartender for a number of years, but in researching this novel, you ensconced yourself in the library. So what are the main differences between a bar and a library; and what are the similarities?

The 42nd Street Library has held a soft spot in your heart for many years.  Why is that?

I touched on this above. Libraries in general, and the 42nd Street Library in particular, are remarkable places. I can’t tell you how many books have been written by authors using the resources of the 42nd Street Library, many of them doing their research in the Frederick Lewis Allen Room or the Wertheim Study. These study rooms are open to authors and scholars by application.

The great thing about libraries, and for me especially the 42nd Street Library, is in addition to the amazing content (books, journals, newspapers, databases and so on) are the folks who work there, the librarians. Not only do they have expertise in helping you find what you’re looking for (Google can find you hundreds of sources; a librarian can find you the right source), they’re so often remarkably knowledgeable and interesting people. A bunch of librarians from the 42nd Street Library blog about everything under the sun. One of my favorite blogs is that of the long-time moderator of the study rooms Jay Barksdale (retired now). Many libraries have blogs and reader groups on all sorts of topics (including thrillers)—Lesa’s Book Critiques is one—where librarians are just doing interesting things for fun, because that’s the kind of folks they are … curious.

Your protagonist, Raymond Ambler, has a near encyclopedic knowledge of crime fiction. Was it fun to bring your own knowledge and reading history into play, and are there any hidden literary Easter eggs the reader should look out for?

Ambler has a wide-ranging knowledge of crime fiction; his creator not so much. Most crime fiction writers are voracious readers of crime fiction, as am I. But I couldn’t hold a candle to someone like Otto Penzler or Michael Dirda, for example. A few years back, when I taught English at a community college, I created a course, Detective Fiction as Literature, which I taught for a few years, and which gave me a chance to read crime fiction and its criticism while on the clock, a great opportunity. It was generous of Ace Atkins to attribute to me an “almost encyclopedic” knowledge of crime fiction. I suspect he knows the field better than I do.

Libraries—especially large ones like 42nd Street—seem full of imagination-fueled dark corners and mystery. What is the most frightening thing that has happened to you while researching a work in progress?

I can’t think of anything especially frightening that came out of my research, except for sometimes what comes out of my head. I’m neither a violent nor especially action-oriented person. This is reflected undoubtedly in my main character, Raymond Ambler, who is more cerebral than physical. He is however a student of tai chi, which most people think of as an exercise for elderly Chinese folks—a bunch of whom can be found in Bryant Park, out back of the library some mornings—but is actually a martial art. It’s a sort of peaceful version in that it uses the force of the aggressor against himself, or possibly herself, by basically getting out of the way. In Murder at the 42nd Street Library, Ambler uses tai chi a couple of times to protect himself. Otherwise, he’s mostly trying to figure things out rather than beating the truth out of someone.

I understand you are hard at work on the second Raymond Ambler novel. What is in store for him this time, and what’s next for Con Lehane?

I recently turned in the second Ambler book. Once more, the story revolves around a donation of someone’s papers to the library’s crime fiction collection that leads to murder. This time, it’s a retired cop turned thriller writer, who’d spent his NYPD career as a handler (someone who supervises confidential informants, referred to variously as snitches, finks, narcs, and so on) whose collection leads to murder. Ambler investigates, as does his friend from NYPD homicide, Mike Cosgrove. His friend and fellow worker Adele Morgan again plays a prominent role, and Manhattan’s surliest bartender Brian McNulty continues to advise.

New York City is your latest book and three previous novels. Is there anything special about New York as a setting?

New York is the setting of all of my books because it’s an endlessly fascinating place. I tend to look at New York as a whole—all five boroughs, or at least four of them—and the New York of natives, rather than the New York of tourists. The rich and super rich have taken over Manhattan and pretty much destroyed the character it once had when writers like John McNulty and Joseph Mitchell wrote sketches for The New Yorker, and Damon Runyon wrote about Benny Southstreet, Harry the Horse, and the Seldom Seen Kid, or even not so long ago when Lawrence Block wrote books like When the Sacred Ginmill Closes. Still, “there are eight million stories in the naked city” and I hope to tell a few more of them. Con Lehane’s Murder at the 42nd Street Library is his fourth published crime novel, three previous efforts featured New York City bartender Brian McNulty (Beware the Solitary Drinker, What Goes Around Comes Around, and Death at the Old Hotel). His first mystery short story appears in Alfred Hitchcock Mystery Magazine in 2016. Lehane is a former editor, college professor, union organizer, and bartender. He holds and MFA in fiction writing from Columbia University School of the Arts.

To learn more about Con, please visit his website. 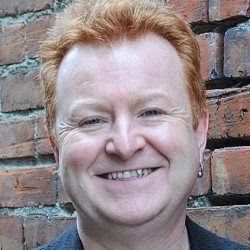 Grant McKenzie is the author of six international best-selling thrillers, plus a Shamus-shortlisted mystery series written under the pen name M. C. Grant. He has three new thrillers in print this year from Polis Books, including The Fear In Her Eyes, K.A.R.M.A. (July) and The Butcher’s Son (September).