She’s a veteran novelist. He’s a professor in Rome. Together, they write as Sam Cabot, whose debut novel BLOOD OF THE LAMB drew comparisons to THE DA VINCI CODE and THE HISTORIAN. The two members of this writing duo, S. J. Rozan and Carlos Dews, sat down with THE BIG THRILL to discuss SKIN OF THE WOLF, the sequel to BLOOD OF THE LAMB.

Tell us a little about yourselves and how you came to be a writing team.

​Rozan: We met in Italy, through a writing workshop where we both teach. I was between projects and Carlos had an idea…​

Dews: I was living my life as an expat in Rome and had a dream to write a thriller set here. I had too much respect for the thriller genre to try one on my own. Mutual friends introduced me to S. J., and the dream team (at least from my point of view) was born.

Tell us about your new thriller, SKIN OF THE WOLF.

​Rozan: SKIN OF THE WOLF​ picks up after BLOOD OF THE LAMB, though you don’t have to have read the first to read this one. Set in the present in New York city, it involves art collectors, a ritual mask, Native Americans, and a murder at Sotheby’s. Oh, and vampires and werewolves.​

Dews: SKIN OF THE WOLF sees the team we introduced in last year’s BLOOD OF THE LAMB (set in Rome) this time in New York where they race against time to prevent the catastrophic misuse of an important Native American mask. Oh, and did I forget to mention that there are vampires and shape-shifters involved?

What was your initial inspiration for SKIN OF THE WOLF and the Father Thomas Kelly series? How did the story’s premise develop through the early days of your writing process?

​Rozan: The inspiration was Carlos’s so I’ll let him tell it. The original premise has never changed much, just deepened as we came to see how much rich material was available.​

Dews: Father Thomas Kelly and Livia Pietro came to me as characters when I first moved to Rome and wondered what would happen if a Irish American Jesuit and an Italian vampire art historian had to work together. I had most of the plot in mind for BLOOD OF THE LAMB before S. J. and I started working together. SKIN OF THE WOLF was, from the point of view of story, a purely collaborative effort, as we worked together from scratch on it.

What sort of research did you do for this project? Any interesting stories there?

​Rozan: Love the research! Best story was the meeting in the blizzard with our Native American consultant, which we can’t talk about because he insists on remaining anonymous.​

Dews: Whereas I was the Rome expert for the first book in the series, S. J. became a near-expert on the Indians of the northeast U.S., especially masks, artifacts, and shape-shifting lore. Together we visited the Brooklyn Museum and the Museum of the American Indian in Lower Manhattan. And, as always, we read as much as we could find on the subject.

How much of yourselves do you put in your characters? With which character in SKIN OF THE WOLF do you most identify?

​Rozan: Personally, I put myself in all of them. Odd as it sounds, in this one I feel closest to Michael. I also have soft spots for Rosa Cartelli and the monk, Carbonariis.​

Dews: Although he is perhaps the third-most significant character (behind Livia and Thomas) in the series, I especially love Spencer George. I like the fact that our pair of characters mirrors our own writing collaboration. But I would be hard-pressed to say if I am more like Thomas or Livia. And I wouldn’t dare try to assign S. J. to one of those two.

​Rozan: There are three crabby old people in this book, and I must have been feeling crabby and old because I got a big charge out of them.​

Dews: Since S. J. drafts the chapters, she might be better at answering this question, but I have to say I feel that working with both Livia and Thomas is equally fun.

​Rozan: We have a big, though vague, outline. Then​ ​we totally blow it up and mess with it as we go. Lots of frantic cross-Atlantic Skyping goes on.​

Dews: This changed greatly between the two books. We had a much more clearly defined outline for BLOOD OF THE LAMB and developed our ideas as we went along in writing SKIN OF THE WOLF.

What sorts of challenges and benefits have you experienced in coauthoring books together?

​Rozan: I wrote thirteen novels on my own before this, and I love the feeling of having a backstop, someone on my side who can actually help when I’m in despair, not just cheer me on.​

Dews: Living six time zones apart and my terrible Internet connection at my apartment here is Rome are the biggest challenges we have faced. S. J. is such a joy to work with that I don’t see many challenges in collaborating with her. I do often wish we lived in the same city (this is an invitation for S. J. to move to Rome) since I think we would work more efficiently. When we do get to work together (across a table in a cafe in New York city or in a hotel dining room in Assisi), it is a joy.

Other than SKIN OF THE WOLF, what is your favorite book that you have written (together or separately)?

​Rozan: My only answer to this has always been, the book I just finished working on is my favorite. It’s the most alive in my mind. So right now, it’s SKIN OF THE WOLF.​

Dews: Well, our previous book, BLOOD OF THE LAMB, is my favorite, since it was our firstborn. As for my own work, the novel I am completing this summer, after seven years of work, I hope, will be my favorite.

​Rozan: Oh, is this hard. I have to go back to Howard Pyle’s ROBIN HOOD. That book, which I read when I was nine, suddenly threw open the door to the thrill of fiction.​

Dews: This is difficult. Since my academic career has been dedicated to the life and work of Carson McCullers, I feel that I should choose THE HEART IS A LONELY HUNTER. But if I were completely honest I would have to say Faulkner’s THE SOUND AND THE FURY or Toni Morrison’s BELOVED.

Dews: I know it is cliché, but what can I say, I love Venice. And this is coming from someone who lives in the center of Rome.

If you could have dinner with any person, dead or alive, who would it be and what would you talk about?

​Rozan:​ Oh, so many possibilities. One who intrigues me is my great-grandmother, because we’re connected but unknown to each other. I’d ask her what is was like to cross the ocean with small children, in steerage on a liner, knowing she’d never see her home village or family again. I’d thank her for doing it.

Dews: As a Buddhist I would have to say Siddhartha Gautama. Obviously I’d like to talk about Buddhism.

​Rozan: Sondheim said it: “Look, I made a hat, where there never was a hat.”​

Dews: Getting to work with someone like S. J. Rozan.

Rozan: As, er, nutty as I seem, and am, in person, I’m very disciplined about the time at my desk.​

​Rozan: Find someone else to look up to! No, seriously, it would be to write, write, write. There is no substitute for experience. There are no shortcuts.

Rozan: The next Sam Cabot book will be BRUSH OF THE GHOST. There may be a new S. J. Rozan book before that—timing’s unclear. Readers can go to the Sam Cabot website, or to Sam Cabot’s Facebook page.

Dews: I hope we have the opportunity to write more books as Sam Cabot. Sam Cabot’s Facebook page is a great place to find the latest information on Cabot. S. J. and I both have personal webpages, Facebook accounts, Twitter feeds, and so on.

Thanks to this dynamic duo for taking readers behind the curtain of their writing world! Native American lore, historical mysteries, art collectors, ancient masks of power, vampires, werewolves, and the Catholic Church combine in a fascinating way in this new thriller from Sam Cabot. Be sure to check out SKIN OF THE WOLF when it hits shelves and the end of this month.

Sam Cabot is the pseudonym for Carlos Dews and S. J. Rozan. Carlos Dews is an associate professor and chair of the Department of English Language and Literature at John Cabot University, where he directs the Institute for Creative Writing and Literary Translation. He lives in Rome. S. J. Rozan is the author of many critically acclaimed novels and short stories that have won crime fiction’s greatest honors, including the Edgar, Shamus, Anthony, Macavity, and Nero awards. Born and raised in the Bronx, Rozan now lives in lower Manhattan. This is their second novel. 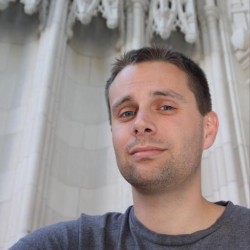 Latest posts by Jeremy Burns (see all)
0
No Comments Yet